Number 20 Blossom Street was built as the Forsselius car showroom, between the wars. The Pevsner guide calls it ‘a period piece well worth preserving’. Audrey, who now lives in the US, remembers it well, and the original Forsselius garage across the road.

“My father worked at Forsselius Garage in Blossom St. He was always called Kitch, he was a very skilled mechanic. I think most people, taxidrivers etc, knew dad. Another uncle worked at the garage on the Mount.

The original Forsselius was on the convent side of the road. There was a showroom with the long entrance down on the right side, living in accommodation over was a Mr and Mrs. Hall, he worked at the garage also. The Lion and Lamb was on that side with the Post Office a little further.

When Forsselius bought the Horsleys Gunsmiths they quickly knocked it down. It was a lovely old house upstairs before that, 15 rooms I think in all, with attics above, a paradise for kids. They put up the big showroom with the righthand side tower which housed the petrol pumps and stairs to the apartment above where we lived. It was no. 20 Blossom Street. 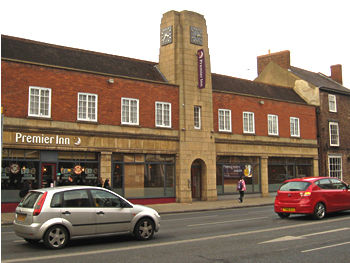 The flat roof over the big showroom was our play-yard. It had two big roof lights on it and we played in the big gaps in between. During the war the Forsselius with the clock tower was used by the National Fire Service.

Dad was well known, with his fawn overalls, crossing the road from one side to the other, to the garages. He was a familiar figure in the Lion and Lamb where the men played dominos at weekends (to their wives annoyance).

Mum used to serve petrol if a customer rang during the night!

My father was in motor engineering from leaving school at 14 it was his life. He saw so much development in cars. He once told me that modern engines were just a set of boxes put together. In the earlier model cars which were much heavier before mass production if a part was broken the mechanic had to go down the workshop and often make a new piece on the machinery in the workshop.

He saw Morris and Wolseley and Austin cars become popular and we ran an old Armstrong Siddeley a customer left him in her will as he had looked after it for her whilst she was a customer over the years. I remember going out in it and the smell of the leather upholstery.

My father smoked a pipe and often stood at the front of the garage with it in his mouth unlit. A customer once saw him and reported him to his boss as it being dangerous when serving petrol!!! ”

Audrey’s further recollections of life in Blossom Street, memories of Micklegate and Railway Street, and memories of York during the Second World War

The Press website has a photo of the original Forsselius garage, the first in York to sell petrol (from 1921).
They also have a 1957 photo of the showroom pictured above.

Lisa @YorkStories is the creator, administrator, and writer of content on www.yorkstories.co.uk. She can be contacted on this link or via Twitter, @YorkStories
View all posts by Lisa @YorkStories →
Tagged  1930s
To link to this page's proper location please use the > permalink