The 2011 vision suggests more parks, and more trees, and in particular a park/civic area for St George’s Field, near the confluence of the Foss and the Ouse. No one can object to such a nice idea – more parks and trees (though I guess people who currently park at St George’s Field might not be overjoyed).

If we’re going to plant more trees it would seem we need a top-class tree expert to choose what to plant where.

The plan emphasises linking up the strays and other green areas. The Strays and Ways of York, published about forty years ago, suggested the same, and there have been massive improvements already to the stray lands.

Opening up the Museum Gardens – possibly at night – seems a bit more problematical. It’s not a mere park, it’s a botanical garden with impressive champion trees, classy shrubs and carefully-tended perennials. The railings do a reasonable job of protecting the Gardens at night. Having drunken folks – ‘diddlydonks’ included – wandering in at night from the riverbank doesn’t seem like it would work?

Oh blimey. The vision appeared at this point to have gone off somewhere ordinary mortals can’t reach. When is this likely to occur? When we’ve all got jet-packs? Or perhaps after complete annihilation of all human life? I missed the bit that explained how civilisation would become so technologically advanced that we wouldn’t need roads anymore to get lorries full of produce to supermarkets.

Or perhaps it was that we were going backwards in time, to horse and cart usage, and maybe foraging for turnip tops in the fields around the countrified ring road, after a nuclear attack.

The poor quality of
some of its public space is part of the reason why York
is no longer the first choice for shopping for a large part
of its catchment population.
– ‘York New City Beautiful’ (p26)

I’ve never heard any resident cite ‘the poor quality of public space’ as a reason not to shop in York city centre. I have heard them saying, frequently, that it’s too expensive to park.

As we all know, the Tesco stores, Monks Cross and the Designer Outlet are in some ways attractive alternatives to shopping in town, depending on what you need, and therefore many people who live locally choose to go out to those areas instead. Sadly, in many cases it’s a better ‘offer’ – in terms of convenient parking, mainly. It’s called capitalism, isn’t it, the way this works? And most apparent is that people don’t shop in town for heavier goods – such as food shopping – because if you’ve got a lot to carry it’s clearly much easier if you don’t have to walk very far with it and can get it home to your own front door in your own vehicle.

Personally, I don’t drive. But I know that shopping in the out-of-town locations is often more convenient in that you don’t have to walk round tourists dawdling about in Petergate and the like but can walk in a reasonably straight line to get to a shop doorway. Shopping for necessities in York city centre in tourist season isn’t a pleasant experience, as the place is packed. 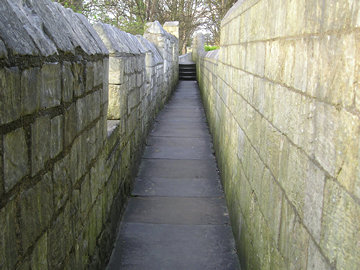 T J Maslen thought we were wasting time repairing and maintaining the walls. His response to them is quite amusing.

The 2011 vision can’t quite suggest their demolition, or neglect until they collapse, but thinks they’d be better if they were less like walls, and there’s a hint of the opportunities that could be had in a wall-less city:

York has one of the most complete examples of
medieval city walls in the UK … But they are
culturally, socially and commercially underused and
difficult to access …
By way of example and precedent to York’s opportunity, in the 1820s
the majority of the fortifications of Krakow in Poland were demolished.
in their place a linear park was created as a two-mile loop set within
52 acres of garden. As soon as the walls were removed, city residents
used the space for strolling.
– York New City Beautiful (p53-4)

Left with an empty feeling …

Most people who have commented in the media seem quite happy with and even inspired by the plans. I don’t know what other ordinary residents of York think – like me, they were maybe horribly alienated by the language used in the introduction to it on the CoYC website and weren’t encouraged to plough through its many pages.

There seems to be an increasing interest in producing plans and visions, and the more ambitious and grand the plans get, the longer the areas in question stagnate. Nothing much is happening at Castle/Piccadilly and at York Central, both areas which were under discussion years ago when this website started. This isn’t just because of the economic climate, but because, in areas like Piccadilly, grand plans seem to mean stagnation or rejection of the more modest ideas to better utilise certain buildings.

Surprisingly we’ve managed to evolve fine for centuries, a mish-mash of good and bad, and that’s a major part of the city’s charm. Every now and then we pay experts to produce a vision for our future. They tend to suggest similar things, with additions taking into account technological/cultural developments, and we manage to do a bit of it, usually just a tiny bit. I guess we might have done those things anyway, without an expensive report.

Obviously I’m just an opinionated bystander, sounding off. I thought I should try to think more creatively, so tried to envisage what might improve York … My own ‘New City Beautiful’ – and yours? >