In 1843, T J Maslen didn’t like our medieval streets, and spent a lot of time envisaging grand avenues in their place. In the 21st century, we don’t think demolishing whole medieval streets is a good idea, but the concept of some grand boulevard reappears, as a ‘Great Street': 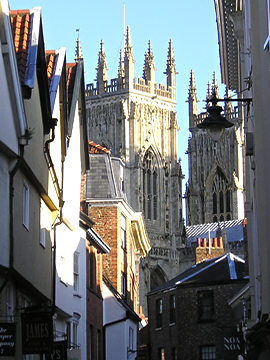 ‘Public realm
improvements will transform these approaches
into grand avenues . . .
The concept of the street provides a clear and simple
narrative for navigation around the city … This street will be the connector through which the
city’s people and knowledge will flow from railway
station gateway to centres of knowledge and learning,
and back again.’

A piece in the local press on the ‘great street’ idea made me finally get around to reading the plan. In the article was the suggestion that the ‘great street’ could be paved in red brick, or perhaps some kind of tar with red chippings stuck in it. It sounded horribly municipal and out of keeping with everything else around. At this point I have to confess I developed a deep suspicion of The Vision. Anything less than natural stone and you might as well leave it as most of it is – as functional and inoffensive tarmac.

Details are important in a streetscape. York Civic Trust knows this, and paves important areas with proper surfaces. They blend in so well we don’t notice them. 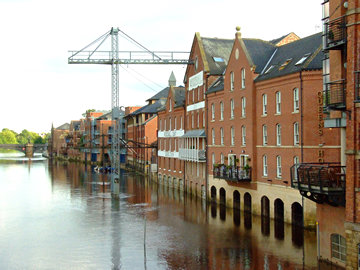 These buildings are definitely facing the river – indeed are in it, when it floods.

‘While some recent development
in York has been designed to take advantage of
its riverfront location, too much development
faces away from the rivers, failing to make the
most of the waterside. Creating high-quality
frontages for commercial, residential and
mixed use development along the river edges
will prove popular to users, increase footfall
and lead to further investment.’

As I see it, very little development faces away from the river. Everything built in the last 30 years or so, and much built before that, faces the River Ouse. Recent properties face the Foss too.

The short stretch between Ouse Bridge and the City Screen development seems to be the focus for such comments about ‘river frontages’. This section resolutely faces away from the river. I quite like the fact that it does, that those shops resolutely continue to turn their backs on the modern idea of rivers being for looking at. Just as I kind of admire Stonebow House for sitting there being so hideously un-York, all concrete ‘brutalism’, a reminder of an earlier decade. If we tidy everything up to fit in with our often rather twee 21st century notions, we lose our more recent history. Just as resonant, for many people who live here.

If I remember correctly, Esher’s plan of the 1960s also suggested riverside walkways in the area near Ouse Bridge. The fact that this stretch remains resolutely unchanged is presumably because WH Smith and other businesses don’t want to remove half their premises just so we can have another bit of riverside walkway. 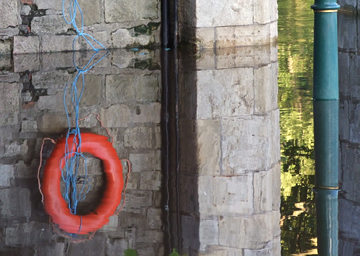 The local Press interviewed people in York about their response to the visions for riverside walkways. Among the usual ‘that would be nice’, and ‘that might be nice but it probably won’t ever happen’, one brilliant and more considered remark came from Janice Wilson, a skipper on YorkBoat, who introduced me to a new word:

‘I can see what they’re saying but we already have a problem with people drinking all day and throwing bottles at us. Because although the river is nice and attracts a lot of people, it also draws a load of diddlydonks.’ 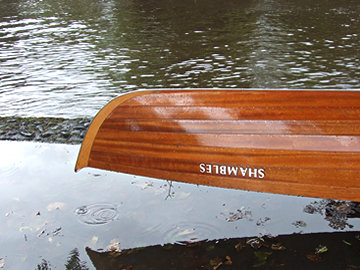 In the world of visions, ‘diddlydonks’ don’t feature, and litter is magically absent, as is mindless drunken vandalism. In this world, people would wander happily and sit on the grass in the parks and make daisy chains. Which is presumably one of the reasons opening up the river frontage of the Museum Gardens is seen as a good idea …