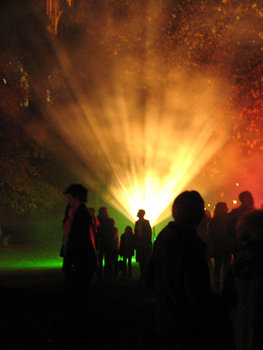 Dean’s Park, York – all smoke and trees and light and sound, as part of the Illuminating York festival. Walking into the darkness of the park, the people ahead were silhouetted, a row of figures heading towards coloured light, like something from the ‘Close Encounters’ film. But this wasn’t about the futuristic and alien – it was about the past, the known. Maybe things we didn’t know we knew. Ancestral voices, ancient poetry.

Its centrepiece wasn’t clear – its centrepiece was us. We gathered in clusters in the open area between the lights and the amplified sound. Though the lit windows of the Minster were above, this was a pagan spectacle, figures magically transformed in the light and smoke.

‘It feels like my home‘ said the magical voices in the circle of sound.

This is my home, and I know well all its short-cuts and alleyways, so it didn’t take long to dash across to the ‘main event’ at the Castle Museum. Which, I have to confess, wasn’t really my kind of thing. The Dean’s Park ‘voice and music-centred piece’ was, for me, the main event of the evening. 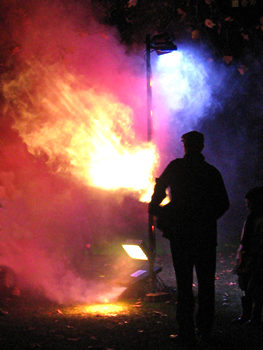 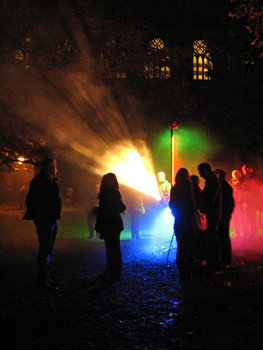 The following evening was equally memorable: Gregorian chant at All Saints, and lit-up locos at the NRM.