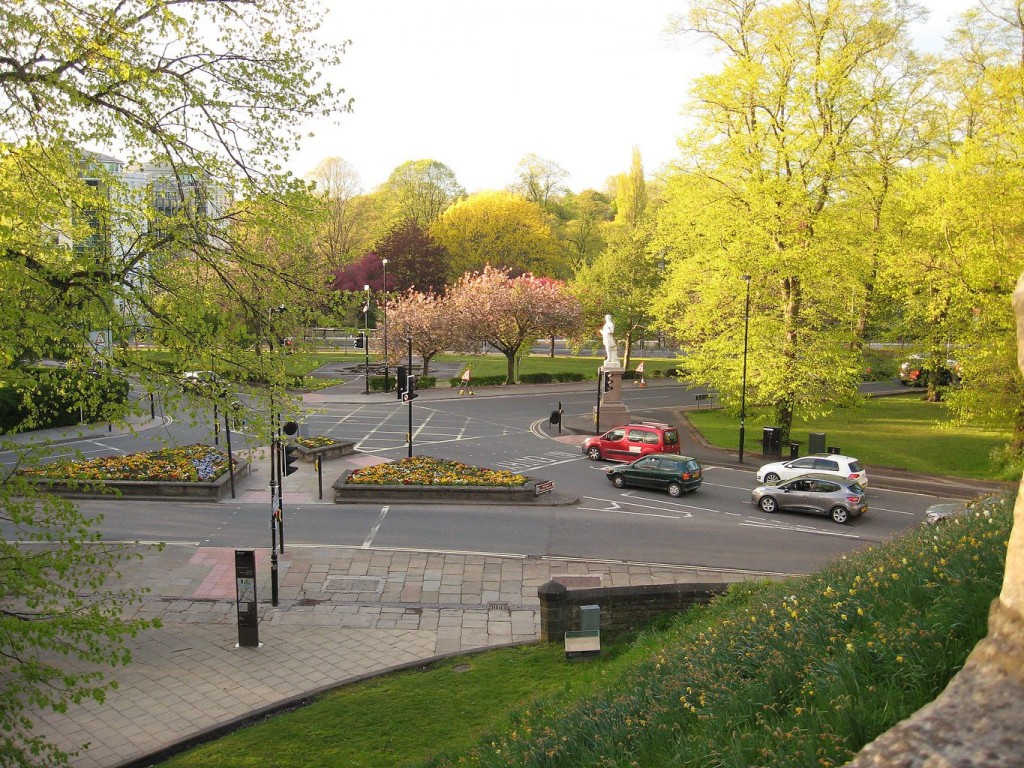 Leeman statue and surrounding roads, from the city walls, 7 May 2021

Beneath the trees, a lot of road. Several different roads, which I’m never quite sure of the names of. Down there we have a Station Road, a Station Rise, and apparently a bit of road called Station Avenue. Right at the back there is the start of Leeman Road, before it heads off out of town past the Railway Museum.

George Leeman looks out over it all. His statue used to be in the middle of the road, but was moved to one side of it, presumably to better improve the traffic flow, here in this area where the busy roads meet.

In the old days, before all the traffic, he had quite an open space to gaze out upon. An old postcard, showing the view back the other way towards the Station Hotel, calls it ‘Leeman Square’. 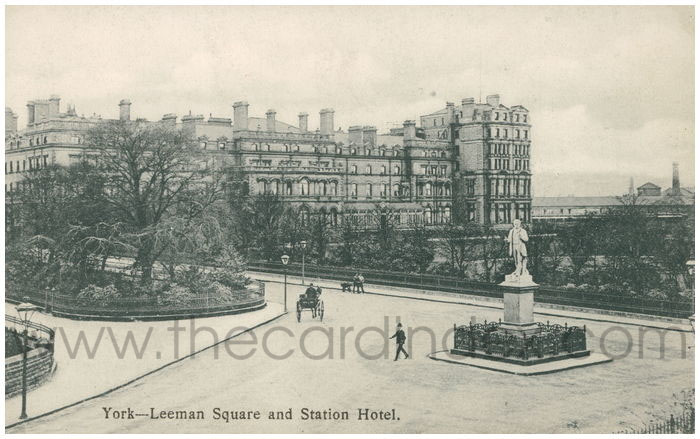 Changed quite a bit, hasn’t it. In the area where the Leeman statue stood we now have a triangular traffic island for pedestrians.

And across the road junction, in the centre of this collection of roads is a small park area, apparently called ‘Triangular Gardens’. I’ve written about it before, at some length, inspired by some old photos I have of it from 1983.

I wondered if this area was mentioned in the Hutchinson and Palliser guide to York, published in 1980, and often good for a personal opinion. It was:

‘The open space between Station Hotel, walls, and Yorkshire Museum across the river could be one of the great urban landscapes of England. Instead it is parcelled off into little parks-development plots, spiced with road signs.’

Still parcelled off, and still with a lot of road signs.

I had to descend into this area as the short section of the city walls approaching Lendal Bridge is closed for repairs. That meant coming down the steps by the archway in the walls where those cars on the right have come through. It’s not a pedestrian-friendly place, with all these bits of busy road, particularly if you come off the walls walk there and want to get to the Leeman Road bit and over Lendal Bridge. Behind the Leeman statue, the pavement turns into cobbles and then narrows down to nothing much by the time you reach the archway near Lendal Bridge. So the pedestrian stuck behind the Leeman statue, as I was, tries to cross there, with traffic coming from various directions.

I’ve just read, in C B Knight’s book about York, a detailed description of how the roads in this area developed from the Thief Lane that was here before. It was a bit confusing, so I end up looking at old maps.

Firstly, this area as it’s shown on the 1852 map, that handsome thing we’ve looked at bits of quite a few times before, available to view online at yorkmaps.net. 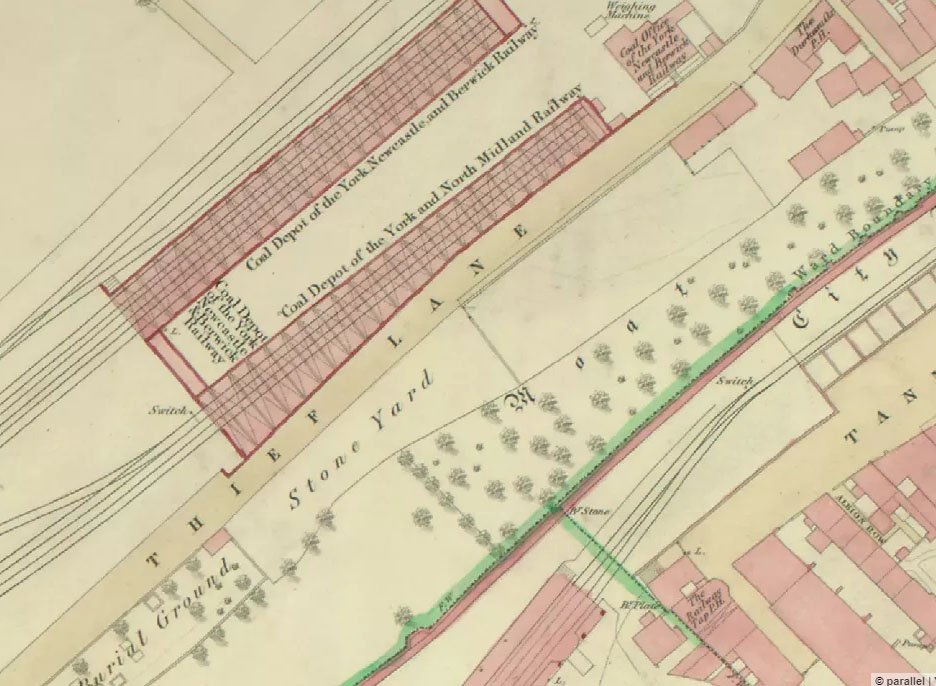 The green and pink line going diagonally across is the city walls. So I reckon my photo at the top of the page was taken roughly where that line ends at the bottom of this section of the map.

Back then, a railway coal depot occupied this area of land. Back then, the station was inside the walls (the area we’ve just walked past on the previous page). When the station we now use was built outside the walls, this area changed dramatically. By the time of the 1891 OS map, the road layout in this area was basically as it is now, various sections of road meeting, and going through arches in the city walls, with that triangular area left in the middle. 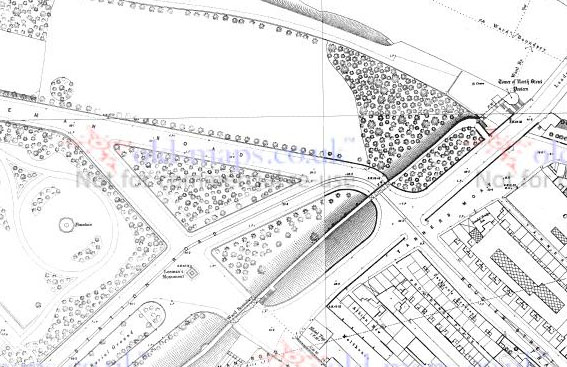 1891 map of Station Road and Leeman Road area, just outside the city walls (from old-maps.co.uk)

The modern Google map aerial view may also be of interest, for comparison.

A photo taken from the walls in this section a little further along, some years back, with the Triangular Gardens in the centre: 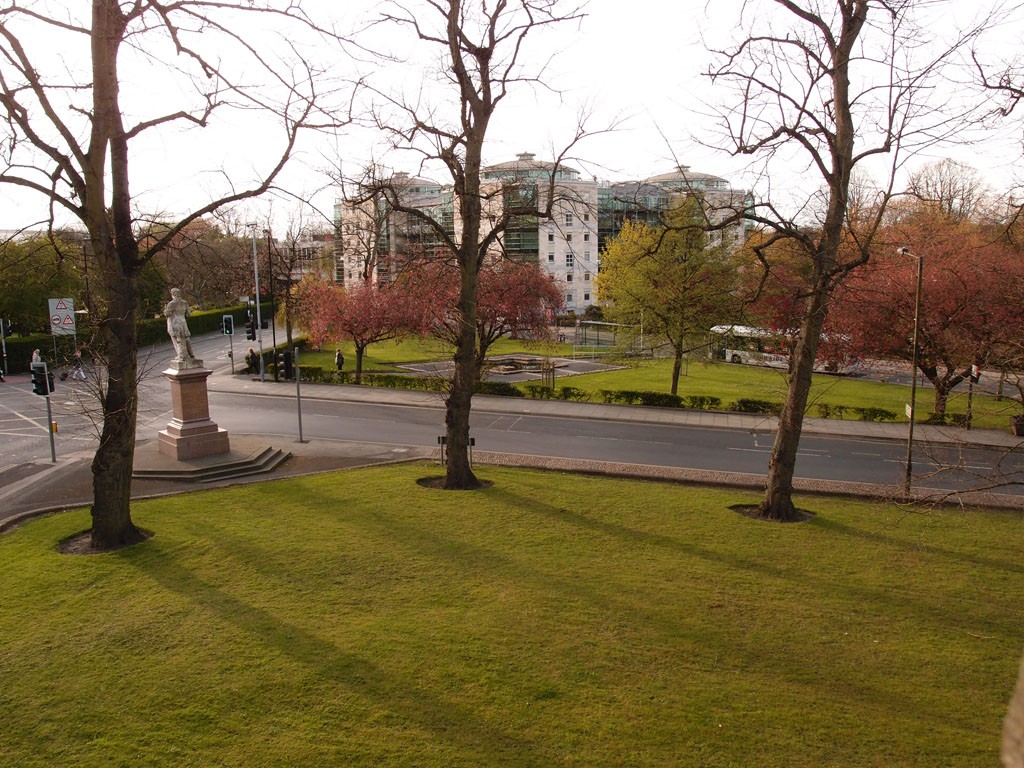 From the city walls, towards ‘Triangular Gardens’, 24 April 2016

I’m not sure if the recently approved plans to improve the area around the front of the station include this part a little further towards town.

Looking at the old maps leads to another page …

Ko-fi coffees are currently powering these pages. It seems to be working quite well, and supporting the thing I’m not officially calling a ‘May daily’ even though it is, at present. Thanks for your continued support, and kind comments.