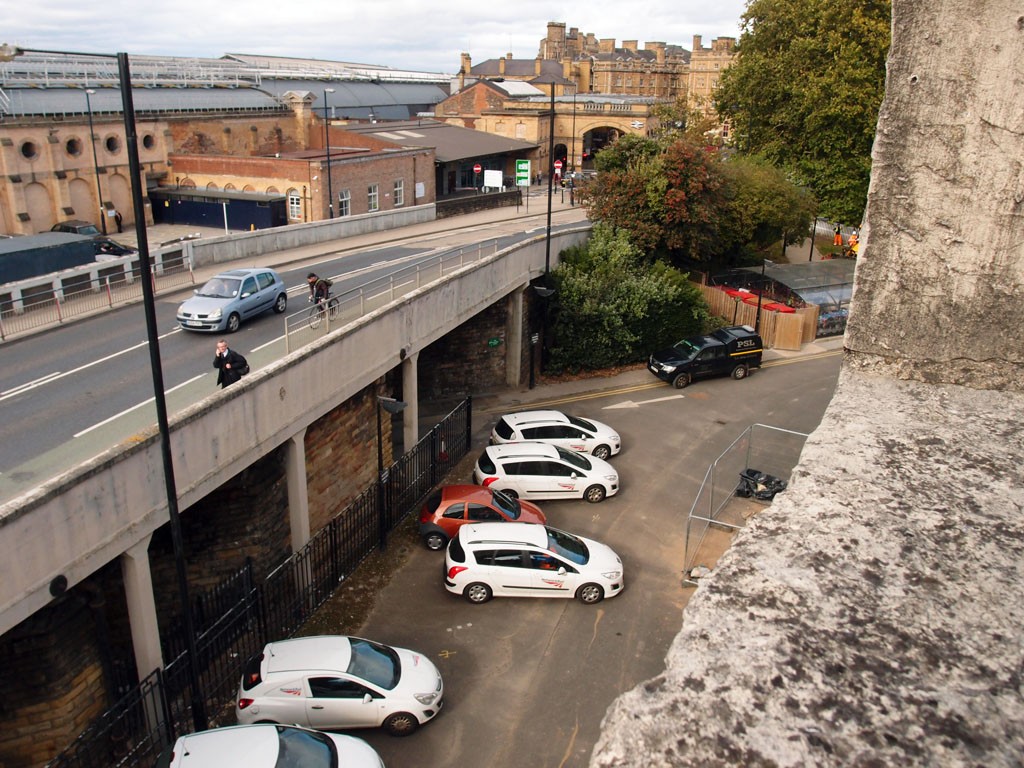 Let’s head out through the station entrance and past the taxis and the bus stops, and into the fresh air (well, kind of). Here we have the city walls, with Queen Street bridge taking us round the corner of the walls towards Micklegate Bar, and passing the Railway Institute buildings.

The planning application for the changes in this area can be found on this link:

(or go to https://planningaccess.york.gov.uk/online-applications/ and put 19/00535/FULM in the search box). There’s also an associated application: 19/00542/LBC (Listed Building Consent).

Under these plans, Queen Street Bridge would be demolished, something I covered at some length some months back, and the part of the plans I find most interesting. But the very long description of this application on the planning portal shows the extent of the planned changes:

So that’s quite complicated, isn’t it. There are many documents covering this major development. I’ve looked at only a few, and thought I’d mention a few aspects that caught my attention, in a huge amount of information on what is a major development in a historically sensitive area. I hope other websites/local media will cover this planning application more in due course, perhaps.

The view from Queen Street

The proposed removal of the redundant Queen Street Bridge will obviously involve major disruption for a long period of time, so any enhancements it offers to the local landscape and the way we travel around it need to be considerable for it to be worthwhile.

Local media coverage has tended to focus on views of and from the area immediately outside the station. I was interested in seeing representations of how it might look, and how it might work, on Queen Street, approaching the station from Blossom Street.

As I don’t have a photo I’ve turned to Google Street View for a an image of how it looks at present: 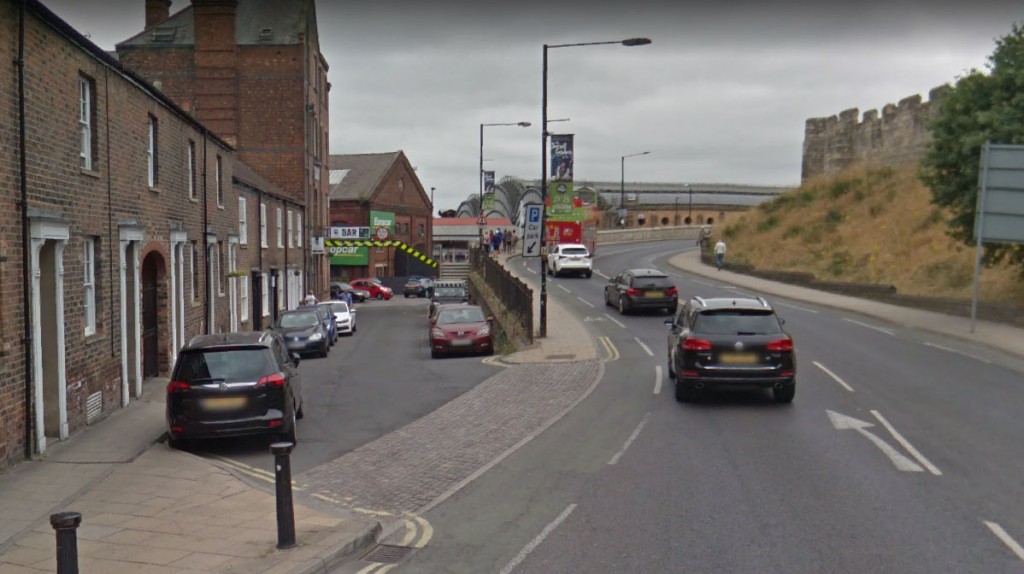 And here’s how it might look, according to an image in the Design and Access statement submitted as part of the planning application:

Proposals for Queen Street, from the Design and Access Statement (ref 19/00535/FULM)

The removal of the bridge makes way for a flatter and wider road. The pavement on the left looks very wide too, while the cycle lane looks narrow and squashed in next to the traffic, as it is at present.

Perhaps better for cars, buses, taxis etc? But it doesn’t look like an improvement for cyclists.

And of course the image above doesn’t show the inevitable forest of road signs etc that will clutter up that clean-looking space.

The removal of the bridge will give a better view of the station, and one of the Railway Institute buildings. Which leads on to another important aspect of these plans …

These plans, if approved, would mean that the RI would lose a small building they currently use as a band room, which is between the larger buildings, and is to be demolished. Comments on the planning application include quite a few objections, understandably, from members who use this facility and emphasise its importance. 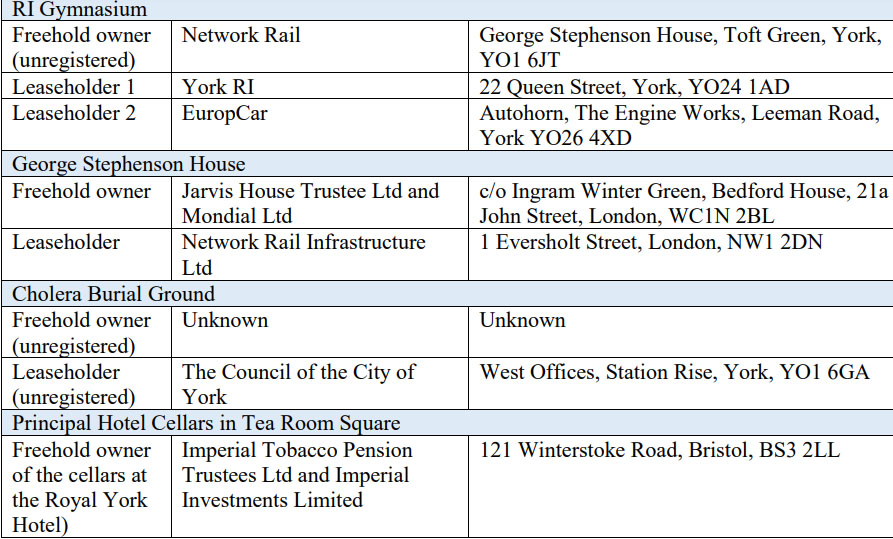 In the list of documents submitted with the planning application there’s a ‘Land Ownership Schedule’, which caught my attention.

The document gives an interesting insight into the complexities of what we tend not to think about when travelling across or spending time in this area of land around the front of York station – who owns the various bits of land. Various freehold owners and leaseholders are listed, including those you might expect, like City of York Council, and Network Rail, but there are many ‘unknowns’, and various complicated layers, including the ‘subsoil rights’.

The hotel building alongside the station appears on the list a few times, called the Principal Hotel and the Royal York Hotel, and perhaps remembered by many residents as the Station Hotel. It apparently has large cellars, stretching under the station’s Tea Room Square and it also has ‘Cellars in Footways and Highway – Station Road’. The ‘Owner of surface and subsoil’ is ‘Unknown’ for the bit under the footways and highway.

Rather standing out as a reminder of times past is the interestingly-named ‘Imperial Tobacco Pension Trustees Ltd and Imperial Investments Limited’ – ‘Freehold owner of the cellars at the Royal York Hotel.’

Tea Room Square’s ownership complexities even include an entry for who owns ‘subsoil rights below and above Principal Hotel cellars’.

The nearby cholera burial ground is in there too, its freehold ownership ‘unknown’.

Then we’re back into the complicated layers when it comes to Queen Street Bridge. The ‘Owner of bridge and the parcel of land under the bridge arches (unregistered)’ is Network Rail, and the ‘Owner of part of land beneath north footpath and substructure’ is City of York Council. 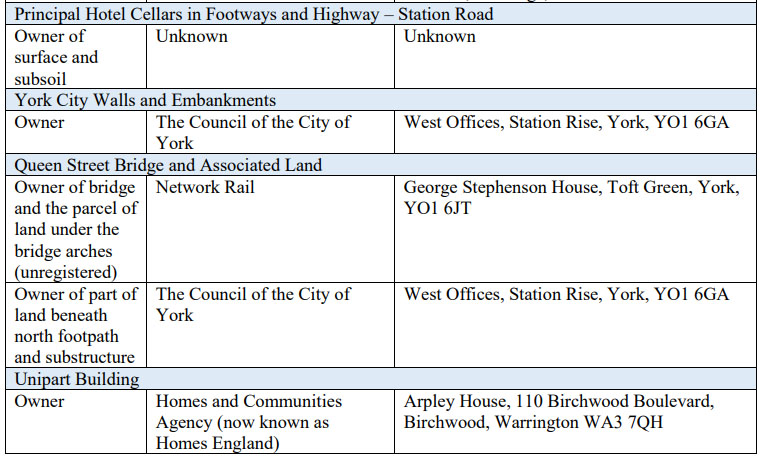 After all these subsoil layers, unknowns, and complexities it’s reassuring to note that the owner of ‘York City Walls and Embankments’ is ‘The Council of the City of York’.

The route of the railway lines

I’ve mentioned before that one of the reasons I had mixed feelings about the demolition of Queen Street bridge was because its arches, when viewed from underneath (from the level of the station’s car park), helped to highlight the original line of the railway lines through the walls to the old station (now West Offices). It was therefore pleasing to see that the Design and Access statement suggests ‘feature paving following the route of the former railway lines’. An image is included of how this might look: 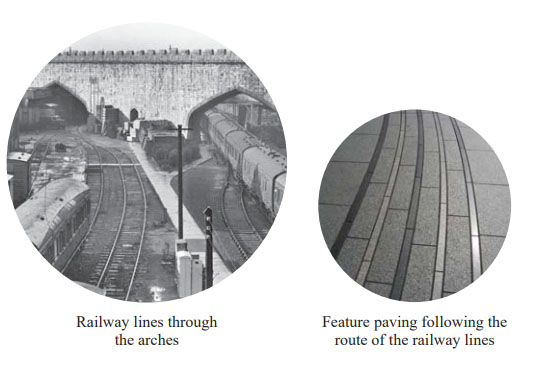 An essential detail, I reckon. Even better if these could be steel rather than shiny stone.

And a multi-storey car park …

Comments on the planning application include concerns about the proposed new car park. Historic England’s response to the plans (PDF here) highlights that they are rather surprised at the lack of detail and information on this aspect:

‘on the basis of the drawings provided we have to question whether it is desirable or appropriate to construct the multi storey car park using a faux medieval design approach.’

I’m struggling to imagine a faux medieval car park, and though I could go off to find the relevant document on the planning portal, this page is long enough already, so I won’t.

We need to rush off towards town, towards many other stories, and attempt to catch up on all the things I’ve been trying to get something written about for months.

Your virtual coffees continue to support this one-person effort to continue to compile, and maintain, a resident’s record of York and its changes. Your coffees help pay the hosting fees, and in general bring good cheer. Thank you.

Lisa @YorkStories is the creator, administrator, and writer of content on www.yorkstories.co.uk. She can be contacted on this link or via Twitter, @YorkStories
View all posts by Lisa @YorkStories →
Tagged  Queen Street
To link to this page's proper location please use the > permalink