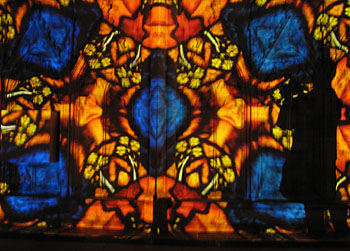 This ‘Kaleidoscopia’ by Andy McKeown was projected onto an interior wall of the nave of York Minster during Illuminating York 2012. The colours were beautiful and the unfolding of it mesmerising. I could have watched it for hours.

All the photos on this page show the ‘kaleidoscopia’ and were taken on 2 November 2012.

One or two other people commenting on the web said they found York Minster’s Illuminating York offering this year rather disappointing. These things are subjective, of course. One person’s ‘beautiful’ is another person’s ‘boring’.

Another factor causing some confusion and complaint was the relocating of the illuminated display to the interior of the building. 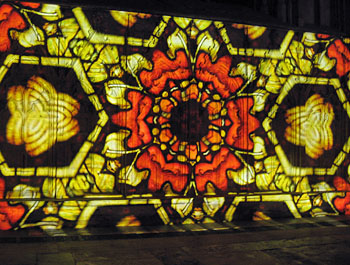 The exterior of York Minster has been lit during the Illuminating York festival in previous years. Not every year, I think, but I recall it being ‘painted’ with light a few times, in an intricate and detailed fashion. I confess I didn’t make the effort to go to see that even though it was free.

One of the previous Illuminating York events when the Minster was painted I walked along Petergate and could see the coloured light on the Minster, and large crowds were gravitating towards it, but I didn’t make the effort to have a better look. I felt it was for tourists, mainly, and it didn’t really interest me. I could admire the skill, but it did nothing to enhance my appreciation of the Minster, which I already find fascinating when lit by ordinary light. 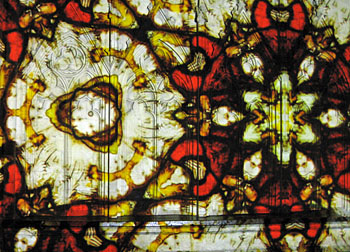 The first attempt to enhance the outside of the Minster with light I did see, by accident, while walking home from the pub with a friend. It’s ten years since that night we laughed in disbelief at the snowflakes projected onto a luridly-coloured Minster. I’ll never forget gawping in horror at the tacky multi-coloured lightshow on that beautiful west front, and the way we said to one another ‘Oh no! What have they done?’, and did that covering our faces with our hands in disbelief thing that the young people now call ‘facepalm’.

I think that was maybe just me and him. Everyone else seemed to like it.

Anyway, things have moved on somewhat since then, and moved inside too. 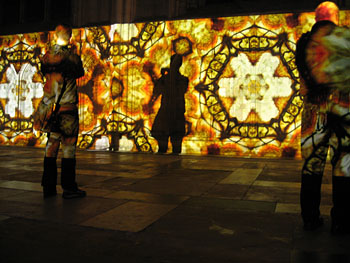 In 2012 we had to pay to go inside the Minster for its Illuminating York event. The light was concentrated onto one area of one wall of the nave. This smaller-scale projection was my kind of thing. It seemed connected to the spirit of the place in a way those exterior illuminations never did. Perhaps because it was small-scale, and detailed. Visitors walking across the front of it caught the light for a moment, some stood long enough to be part of it, colours projected onto their clothing. The circular designs unfolded and retracted like a kaleidoscope, like flowers, like the sun coming out and going back in. Parts were richly-coloured, others more subtle.

Around us the stone columns and above us the vast space of the nave, as high as our medieval ancestors could make it, as they reached towards heaven. I wonder what they would think to see us gathered here – agnostics and atheists some of us – watching 21st century technology beaming colour onto those walls they built centuries ago.