See also: reviews of Wonderland in the comments on an earlier page. 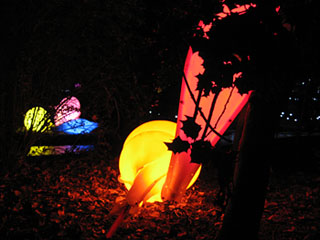 Illuminating York finished last night. Its main event was for the first time held in the gated space of the Museum Gardens, and required payment and pre-booking. I gave it a miss and attended supporting events instead, but did take a few photos of the bits visible through the railings.

Comments made on Twitter seem fairly balanced between positive and negative. Many visitors to Wonderland appeared to be very impressed, and of course these positive comments were retweeted by the festival organisers, while the negative ones weren’t. Can’t blame them for that, but a less filtered representation of public reaction appears on their own Facebook page, and in comments on the Press story.

On these pages of mine, comments from people who rather liked Wonderland.

Expectations, and bigging it up

Many people have compared Wonderland with last year’s main event, which took the form of a massive, complex and impressive light and sound extravaganza, with images projected onto the front of the Castle Museum. There have of course been similar displays as the centrepiece of the festival for some years now. Last year’s was seen as particularly stunning, and as Marc said in comments on a previous page ‘pretty much anything attempting to follow that will feel like an anticlimax.’

It has to be said though that expectations were also raised by the media coverage and press releases. Here’s a few of the comments in the run-up to the event:

The Yorkshire Post: ‘However, with miles of lighting, thousands of LEDs and banks of projectors, this year’s festival is expected to outshine last year’s’ and ‘organisers claim that the event is  bigger than ever before’.

Quoted in The Press was Councillor Sonja Crisp: ‘The scale and ambition of this year’s festival will be truly spectacular. We have never attempted anything this big before.’

The Press also quoted the organisers explaining the decision to charge an entrance fee for the first time, in order to provide ‘something on the size and scale of this’.

The event seemed smaller rather than bigger than ever before. We walked through York on two of the nights (Friday and Saturday), visited four of the &#8216supporting event’ venues and had a peer through the railings into the Museum Gardens. Wonderland looked rather quirky and charming from my ‘looking through the railings’ perspective. But if you’d expected a spectacular, and been thinking it would be as good as last year’s display, you were perhaps going to feel let-down. 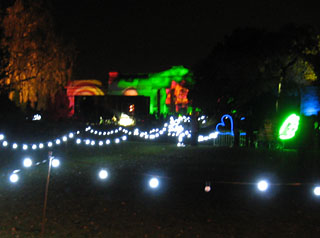 Many people did enjoy it, but those who didn’t have expressed their disappointment forcefully, often so scathingly that I’ve ended up feeling quite sorry for those on the receiving end. Particularly Vic Reeves, who, it seems, was asked to do this, rather than putting himself forward. There has been a suggestion that he wasn’t paid for his contribution, though this hasn’t been clarified yet. If he wasn’t, then the amount of flak he’s getting seems unfair. Even if he was, the vicious condemnation of his work by some has seemed unfair. But then that’s what happens when people have to hand over their hard-earned money, thinking they’re seeing the ‘biggest ever’ ’spectacular’ Illuminating York event.

I’ve read many reviews, but found one by Hellboy62 on Trip Advisor which includes one line encapsulating the disappointment, with added pathos:

“The high point was the exit, where there was a guy with a torch without batteries.”

Letters to The Press, York: Cost of illuminations

From wonder to money-making

Julian Cole, in The Press: Do we want Vic Reeves to light up York? Expressing concerns which appear to have been justified.