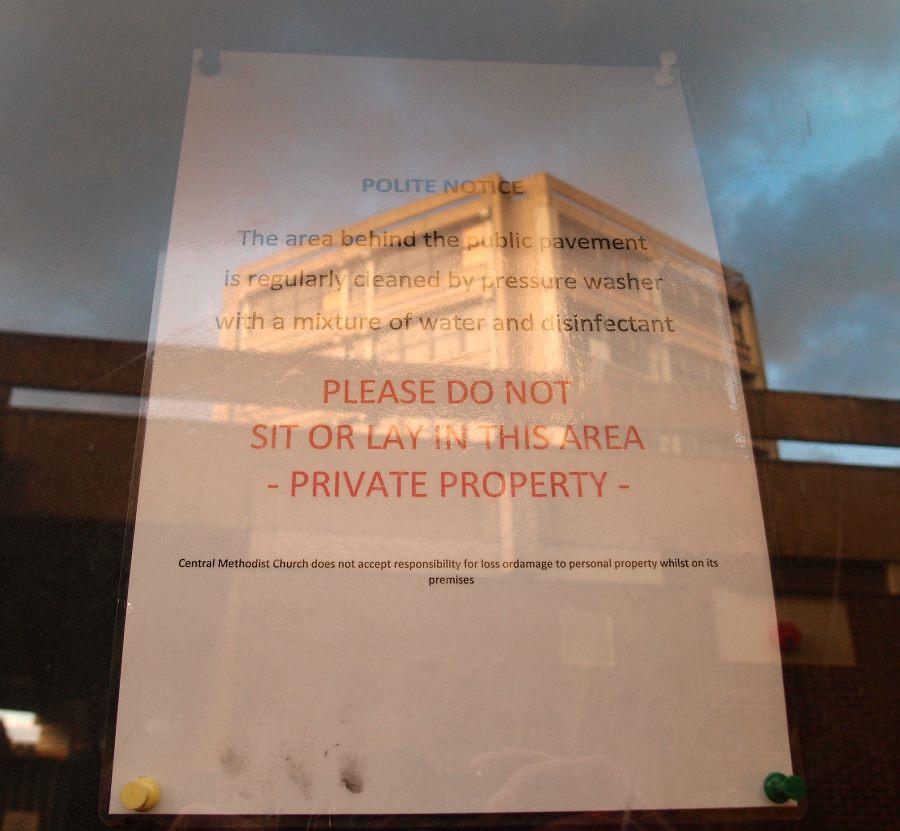 Previously we were at Carecent, behind the Central Methodist church. The glass in the noticeboard at the front reflects the building opposite, a well-known part of the York skyline. Yes, Stonebow House. Let’s nip over there now.

Oh no, many readers will be thinking, I’d really rather not …

Thing is, we were last here looking at Stonebow House when plans had been submitted for its renovation and change of use, and those plans are about to be decided upon, in a meeting this week. So I thought we could have a quick revisit, as I’ve had a look at the report prepared for the planning committee (PDF).

So here we go then, dashing across St Saviourgate to the alleyway through the middle, where the door to the Duchess used to be. 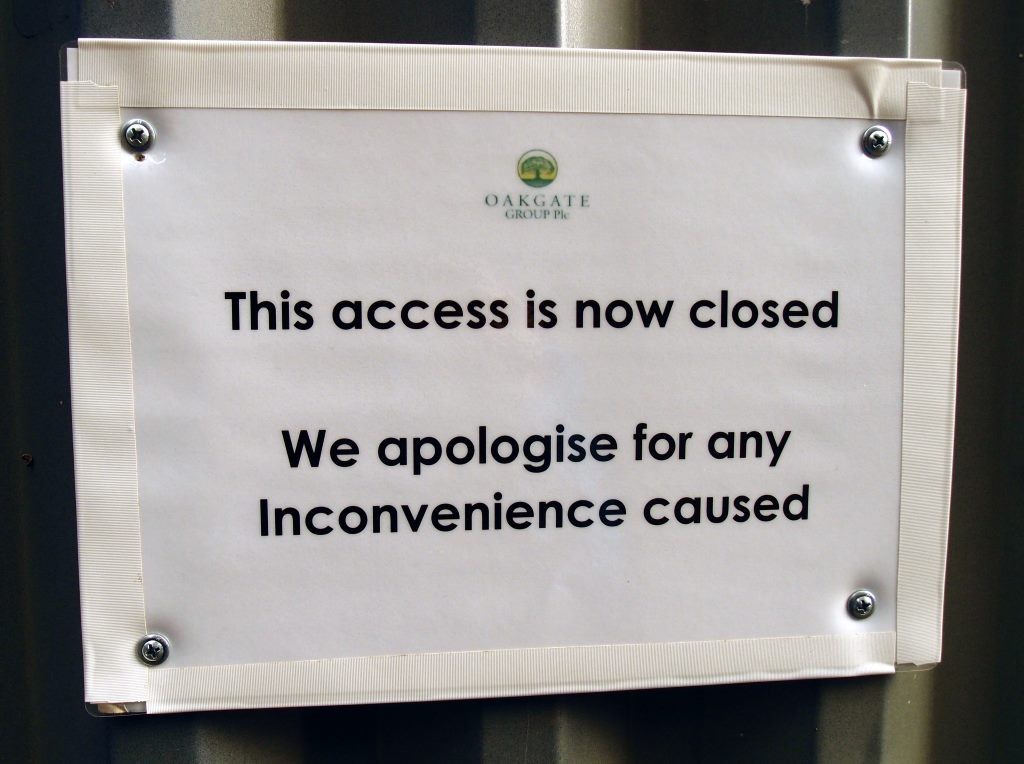 Except we can’t, because it’s already blocked off. One senses that there’s been some eagerness to shut the place down.

Never mind, let’s go round the other side and try the stairs. If they haven’t already been closed off/knocked down. And here we are … 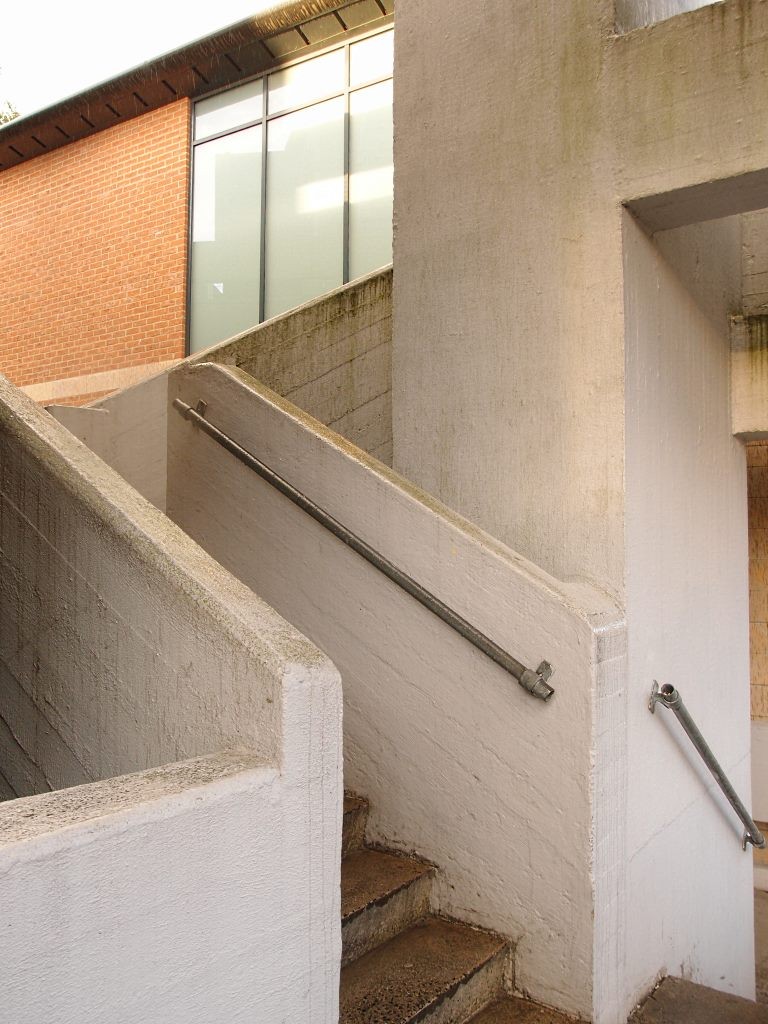 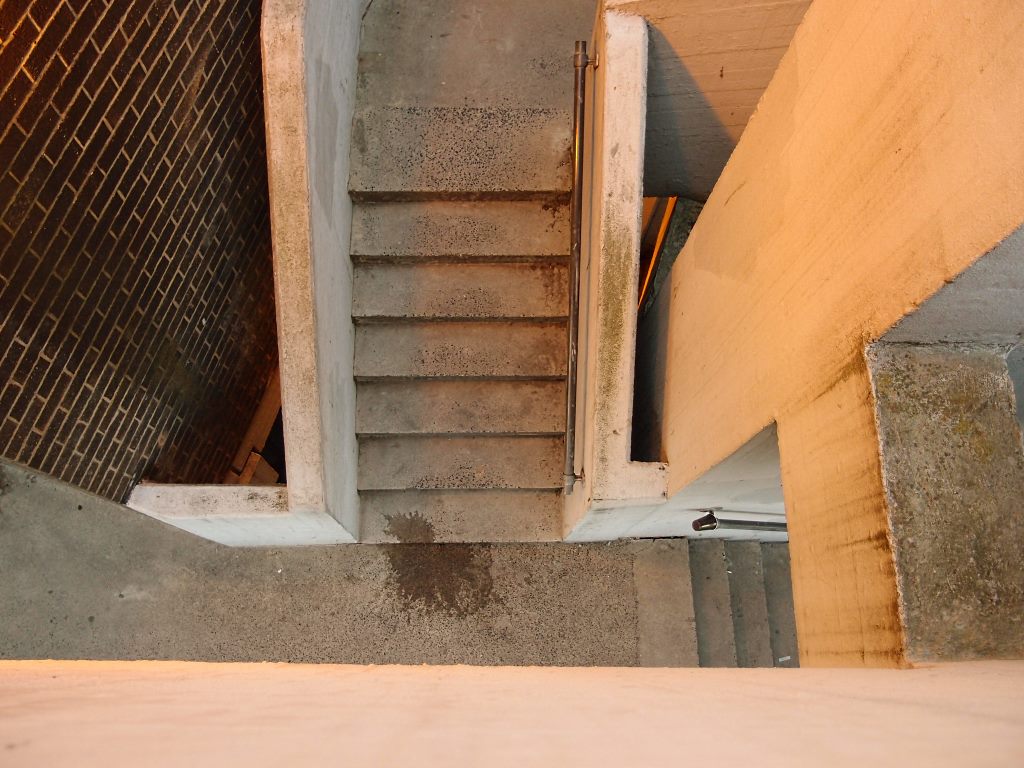 Another ‘access closed’ sign and barrier on the lower level walkway. But I’ve stuck my camera round the side of the barrier to capture this soon-to-be-removed view of the walkway here, and the empty commercial units with their mucky windows. 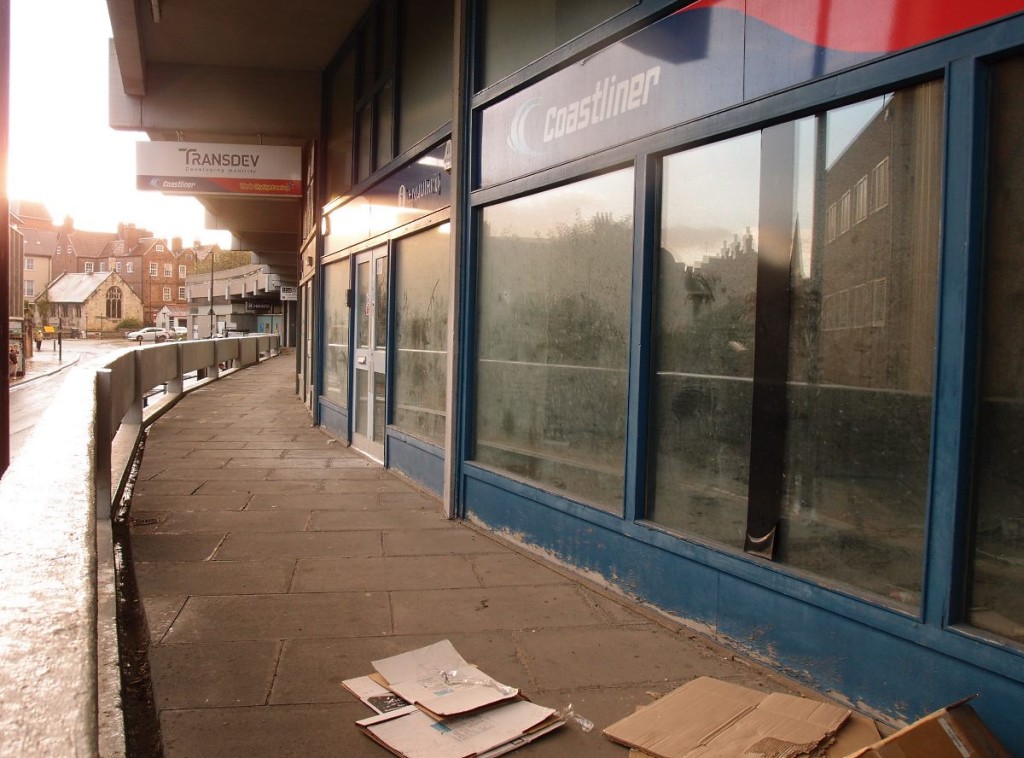 This walkway looks likely to be removed, to widen the pavement area below, or, as the committee report puts it ‘revising entrances off the street to impinge less on the pavement’, resulting in an increase in width of about 1.8 metres. This will I imagine be welcomed by the people who queue at the bus stops here, and all the pedestrians squeezing past the people queuing at the bus stops. 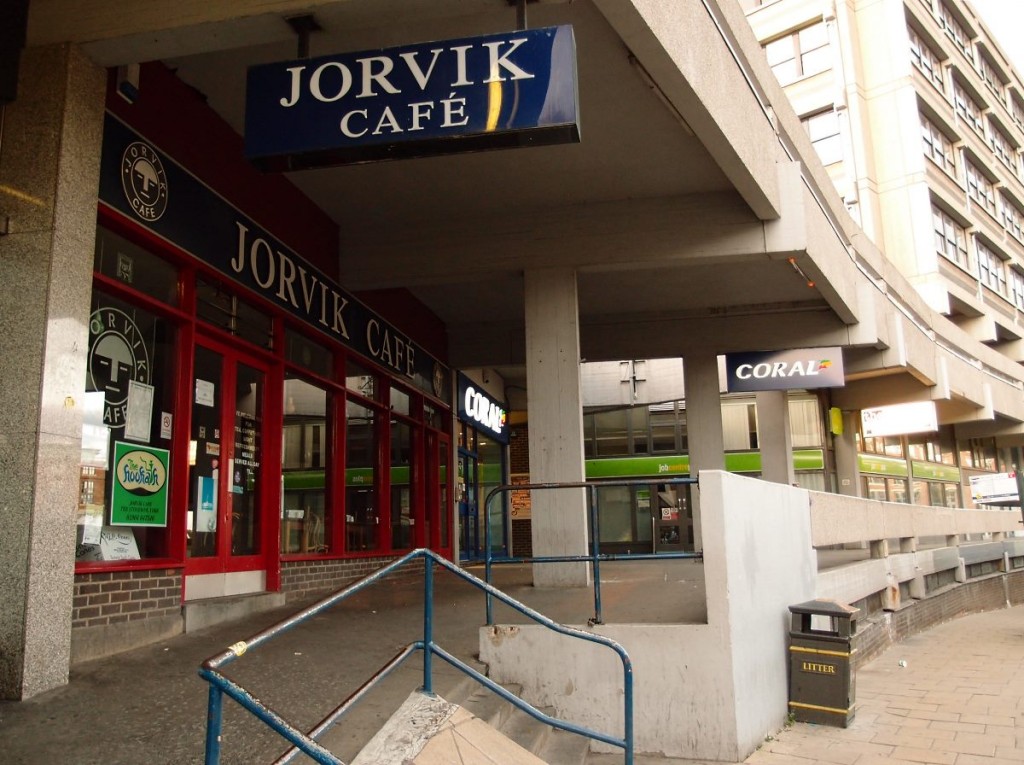 We’re also going to get some ‘public realm uplift’ around the remodeled building, with repaving in the same material as has been used at the front of the Hiscox building. Not clear whether this paving is going to be provided by the developer or paid for by council tax payers.

The committee report (PDF) really is worth a read as it summarises the various aspects of the proposed changes, the comments and concerns raised about the plans, and how they’ve been modified as a result.

It also gives a different perspective on one of the main criticisms of the building, which is the way it seems to block the view of the Central Methodist Church and St Saviour’s church:

The proportions of the tower and refinement of the architecture are a good example of its type and evidentially valued as representing our culture at a rapidly changing period of time: York is known for its layers of history and so, Stonebow House has a contribution to make. The tower itself (squat for its type- presumably tempered for a York context) is positioned with a degree of acknowledgement to its setting towards the lower end of the site. It does leave partial views of the church of St Saviour and the Central Methodist Church from Pavement above the podium. These views would not have been possible in the 19th century and earlier.
(Committee Report, 3.3)

And before we leave this angle on things, that of buildings obscuring and affecting others, let’s pop back to the other end where those soon-to-be-removed steps are. Beyond that is the ‘back end’ of the building, a service area.

This corner/back part is referred to often in the committee report and other documents as being subject to ‘antisocial behaviour’. One of the most antisocial is its use as a toilet. So the plans are designed to deal with that too, by removing the steps. Here’s a reminder of what the steps look like from the street. 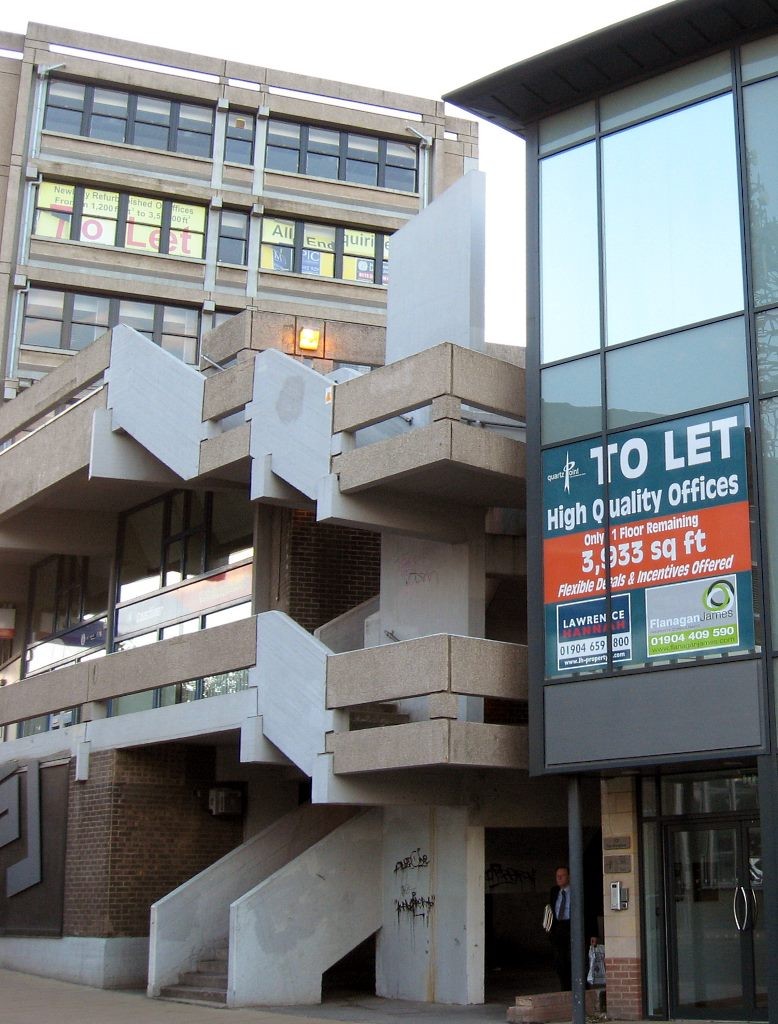 Perhaps it needs to be said that this corner has been somewhat altered by the large bulk of the office block built in recent years right up against the steps. Previously the site was occupied by a garage/car showroom, which as I recall was a rather low structure, and left this corner with more light, and feeling a lot more open, and therefore far less likely to be used for ‘antisocial activities’.

There’s clearly an enormous appetite to tame the Brutalism of Stonebow House, but let’s not forget that the 21st century tendency to build upwards as high as possible on any city centre site might also cause some blight on nearby buildings, alter the character of areas dramatically.

The steps are one of the most interesting (and useful) parts of the building, and these plans will remove them. I’ll be sad to see them go, and the access they gave us to an elevated view of the changes in the Hungate redevelopment area, just across the road, over recent years. 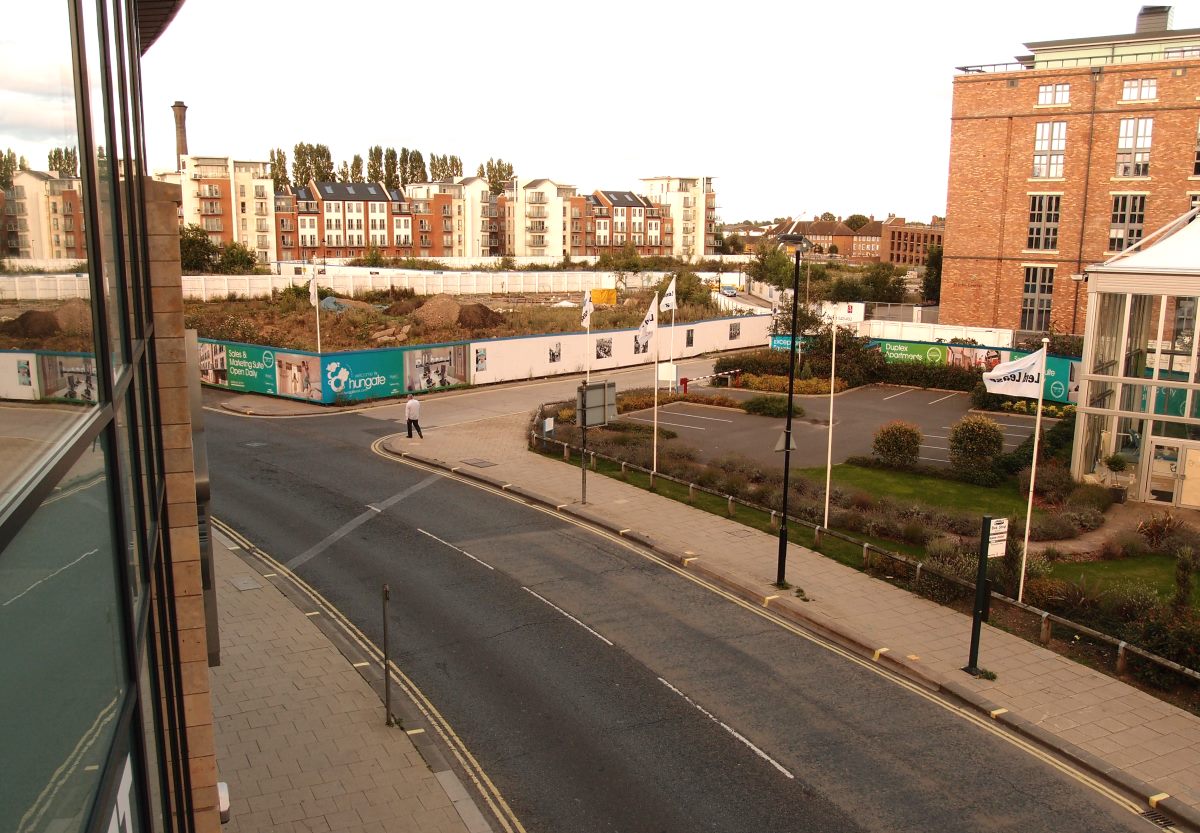 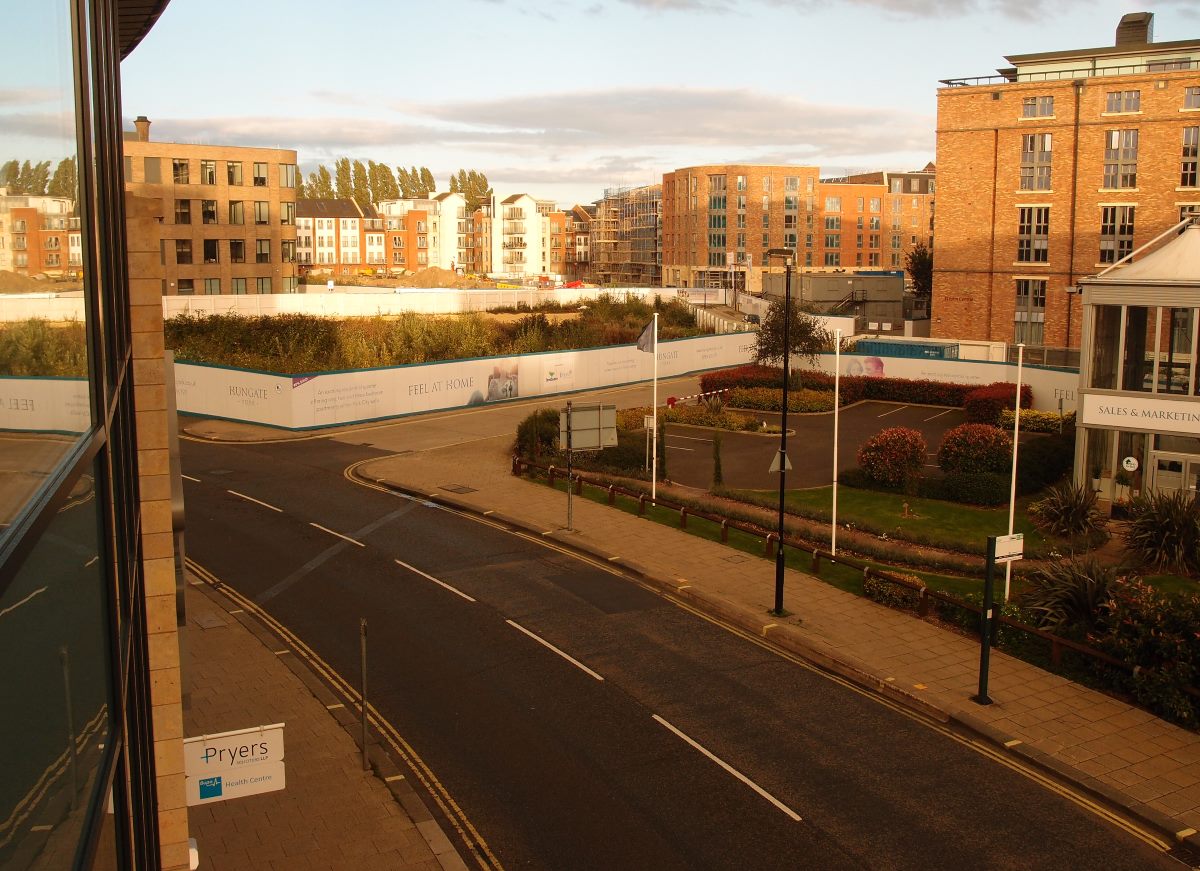 That photo above was taken a few weeks back, and perhaps when I’m next up that way the whole thing will be no longer accessible.

Anyway, thanks for accompanying me on this short wander/exploration of our Brutalist ‘eyesore’, before it’s tamed and prettified.

For anyone feeling jaded by all of that, here’s a photo taken on the same evening as that one above, on the walk away from Stonebow House. A rainbow over the Hiscox building, a 21st century office building more admired than Stonebow House ever was. 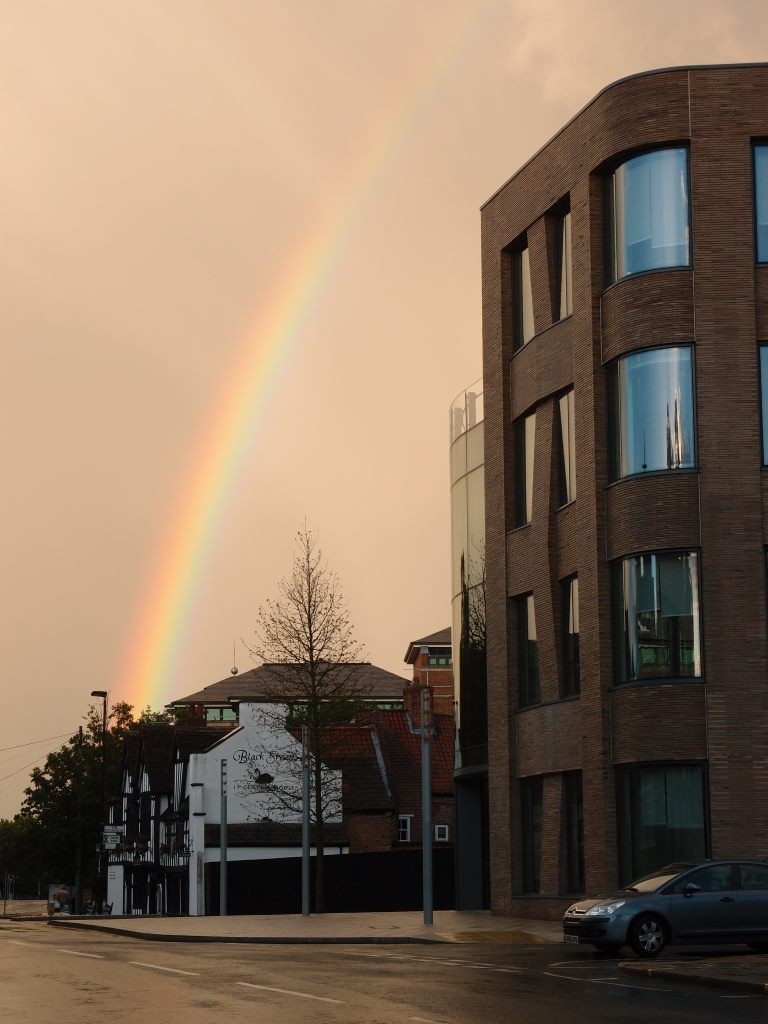 … Or alternatively, for those who, like me, have good memories of Stonebow House … a reminder that it isn’t so much what a building looks like as the good times that happen within it. 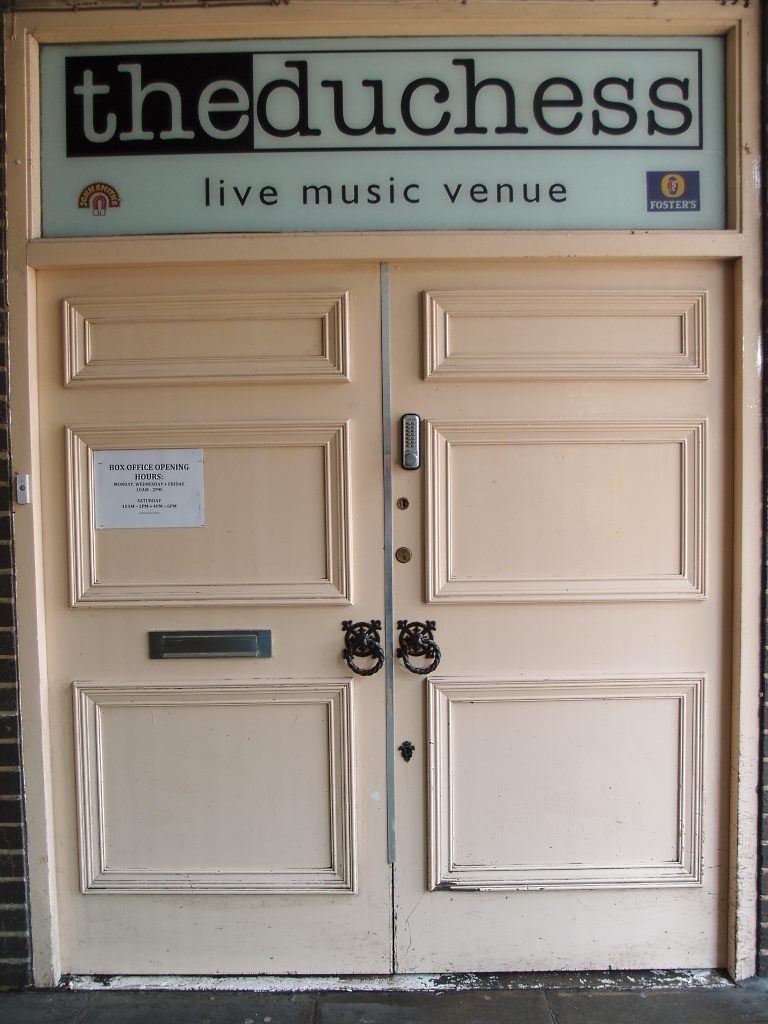 For me, for example, remembering my cousin Liam’s gig continuing for a while outside. Stonebow House hasn’t just been a place of ‘antisocial activity’ but, for the record, saw a lot of social activity too, as many of us know, and I hope will remember, when it’s another rather posher kind of place.

By Lisa @YorkStories • 5 October 2016 Buildings, Planning
Tagged  Stonebow
To link to this page's proper location please use the > permalink