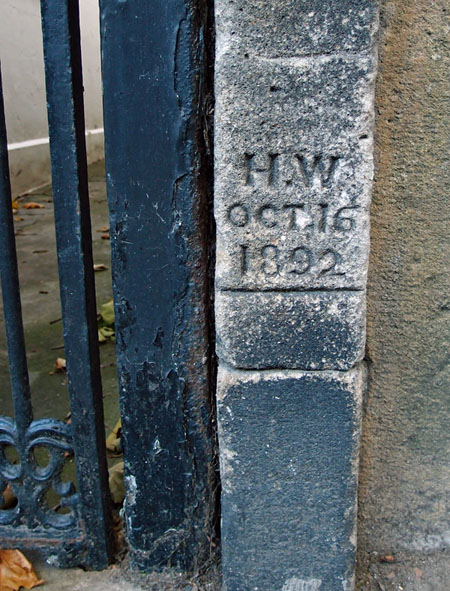 Carved in stone, near Lendal Tower

As the Ouse is rising again, it’s a good time to mention this local detail, noticed recently on the gatepost of one of the houses next to Lendal Tower, where the lane descends from Museum Street to the river, alongside Lendal Bridge. Another detail I’ve walked past hundreds of times and not noticed. Carved into the stone: ‘H.W Oct. 16 1892′ with a line underneath.

If I was passing by, a visitor to the city, I might think that someone called Hugh Williams or Hugo Watkins had just fancied inscribing his name in a gatepost. But if we have local knowledge and awareness of our city’s history the meaning of this is immediately obvious. It’s a marker of the ‘great flood’ of 1892. ‘H.W’ must be ‘high water’.

‘From the 14th to the 16th a storm of considerable strength was apparently central south of the British Isles. The rains of this period were very heavy in the eastern counties of England. In York, the greatest flood in 60 years occurred along the River Ouse; upwards of 500 houses were damaged.’

The carving into this stone is neat and professional-looking. Interesting enough in itself, but above it, on the same post, a later addition: 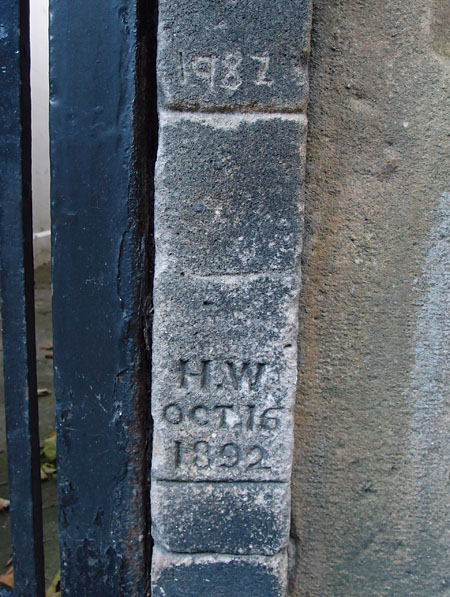 More roughly inscribed, in a more amateurish fashion, with only ‘1982’, but if we get the inscription below we understand this one too. It’s recording another ‘great flood’, 90 years later. The one where the buses couldn’t get through Rougier Street and the private road near West Offices was temporarily opened to traffic.

There are stories behind both these inscriptions, no doubt. But I don’t know them. 1982 is recent enough, so if anyone reading does know more, please add a comment.

There were other major ‘flood events’ between 1892 and 1982, not added to the post. Was it perhaps the similarity in the numbers, the same digits in a different order, that made someone want to carve a record of the flood on the gatepost?

Last autumn I remember watching from Lendal Bridge, above these houses, as the residents carried their valuables from the property, as the river did the thing it has always done, from time to time, expanding beyond where we’d like it to be. No one carved the 2012 level on the post. We have technology now to record these things. But not quite the same, is it.

The 1892 flood seems to have been the first to have been captured on camera. The city archives have a handful of images, including this rather special one: 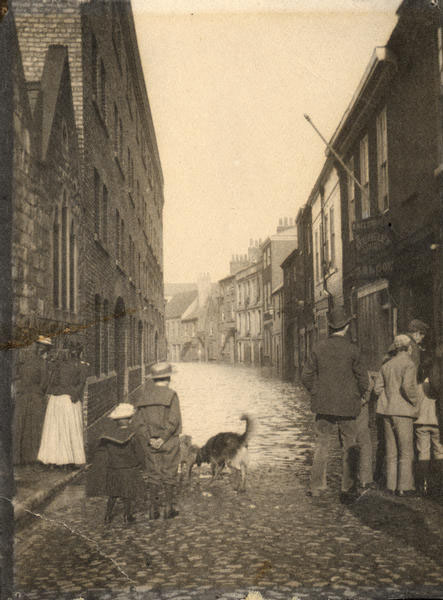 So many changes since 1892, but this could be us, last autumn. Not on North Street – now defended from floods – but on Skeldergate, a little further along. We all gathered at the edge of the water, watching.

The river has risen again today. It’s been a while since the last ‘flooding event’, but I noticed last night, walking by the river, that those waters from the higher ground had reached us, that we had a bigger and wider river than usual.

Flood warnings were issued today. Let’s hope that all that extra river passes through without causing too many problems this time.

Lisa @YorkStories is the creator, administrator, and writer of content on www.yorkstories.co.uk. She can be contacted on this link or via Twitter, @YorkStories
View all posts by Lisa @YorkStories →
Tagged  floods, Ouse
To link to this page's proper location please use the > permalink