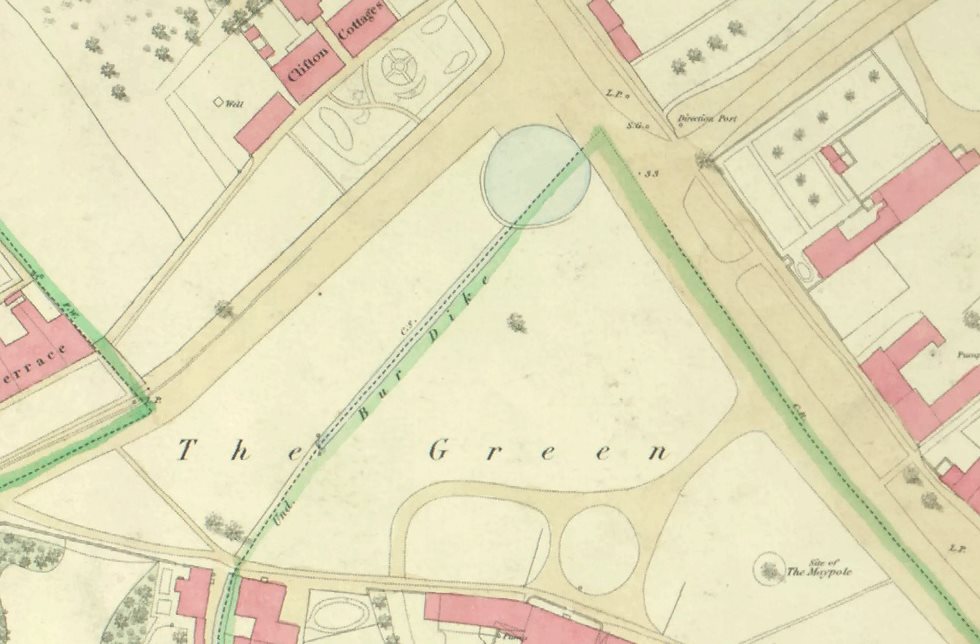 Though this side of town (away from the Foss) stayed mainly dry in the recent floods, there were sudden surprising amounts of water in a few places.

On Boxing Day, photos on Twitter alerted me to the fact that Water Lane in Clifton was in one section true to its name, and covered in water. I went up there to have a look.

A large lake had appeared at the lower point of the road, at the junction with Kingsway. 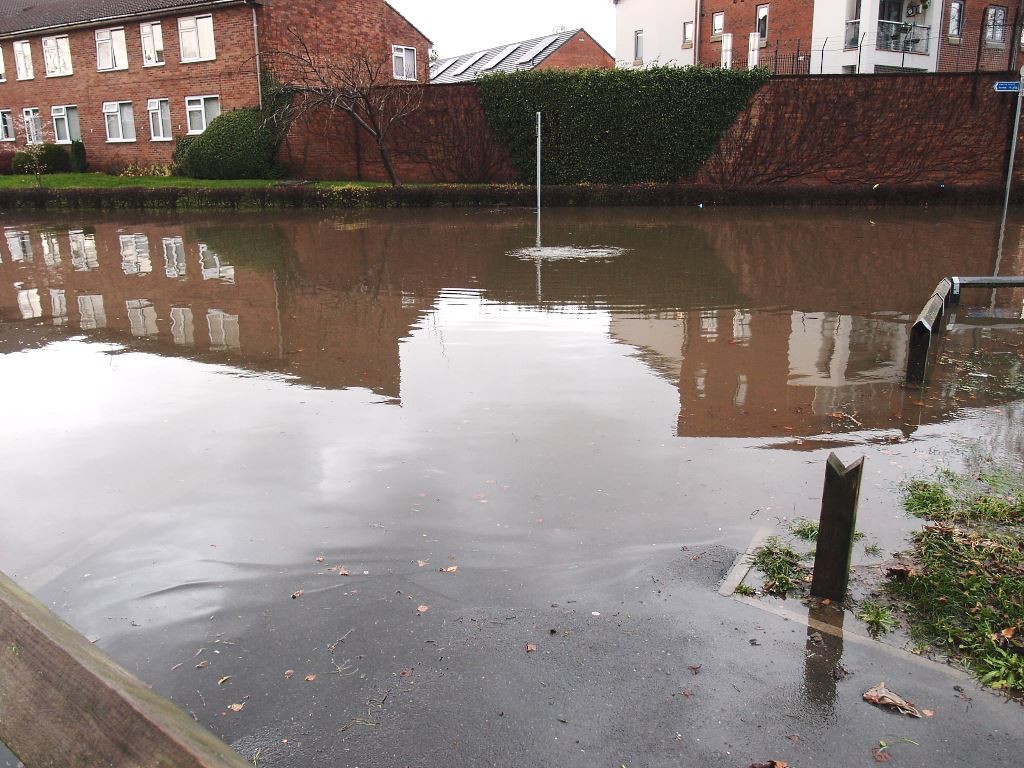 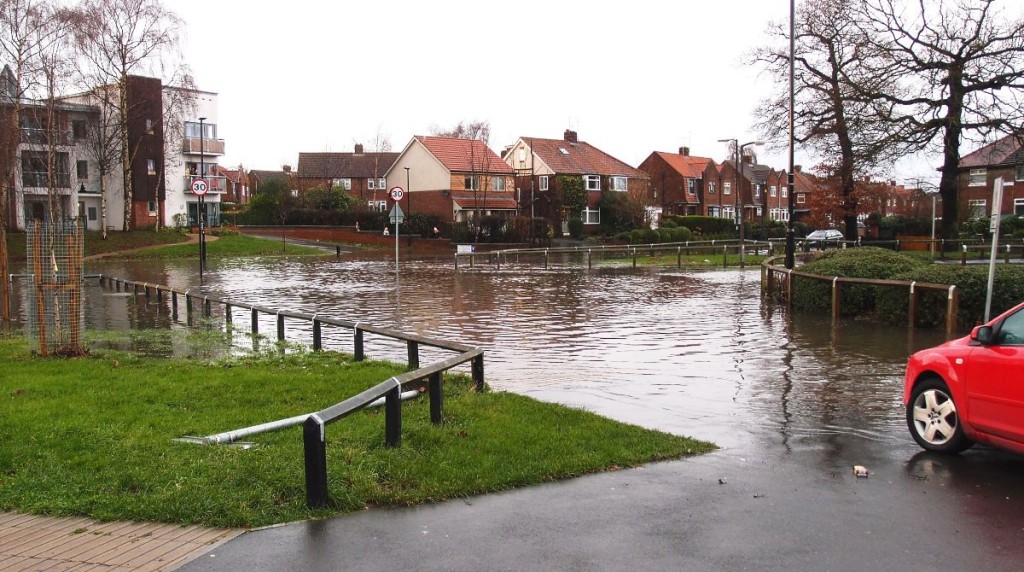 This is nowhere near the river, so clearly this isn’t the river bursting its banks kind of flooding. It might have been assumed that this was the result of heavy rain, and perhaps blocked/silted-up street drains (a fairly common problem in many suburban areas).

After standing there a while it became clear that the water’s surface was in places bubbling up, presumably from manhole covers in the road. Suggesting that this water hadn’t come down from the sky but mainly up from the ground.

I think what we were seeing here was the bubbling up of the Burdyke. (Or ‘Bur Dike’, as it’s called on the 1852 map above.)

This road is one of the old routes, and clearly has one of those typical old names, the ‘call it what it is’ type of name, like the many Church Lanes leading to churches. The map of 1852 shows the Burdyke (Bur Dike) running alongside Water Lane, which presumably often flooded back then. And on this day late in 2015 it was again. This isn’t uncommon, apparently.

It was impassable near to the junction at Clifton Green by the time I got up there, but I wanted to see what was happening at the Green, so it was necessary to backtrack (and approach it via the forbiddingly named ‘Dead Man’s Alley’).

The water covered a large area of Clifton Green, and some of the road areas alongside. 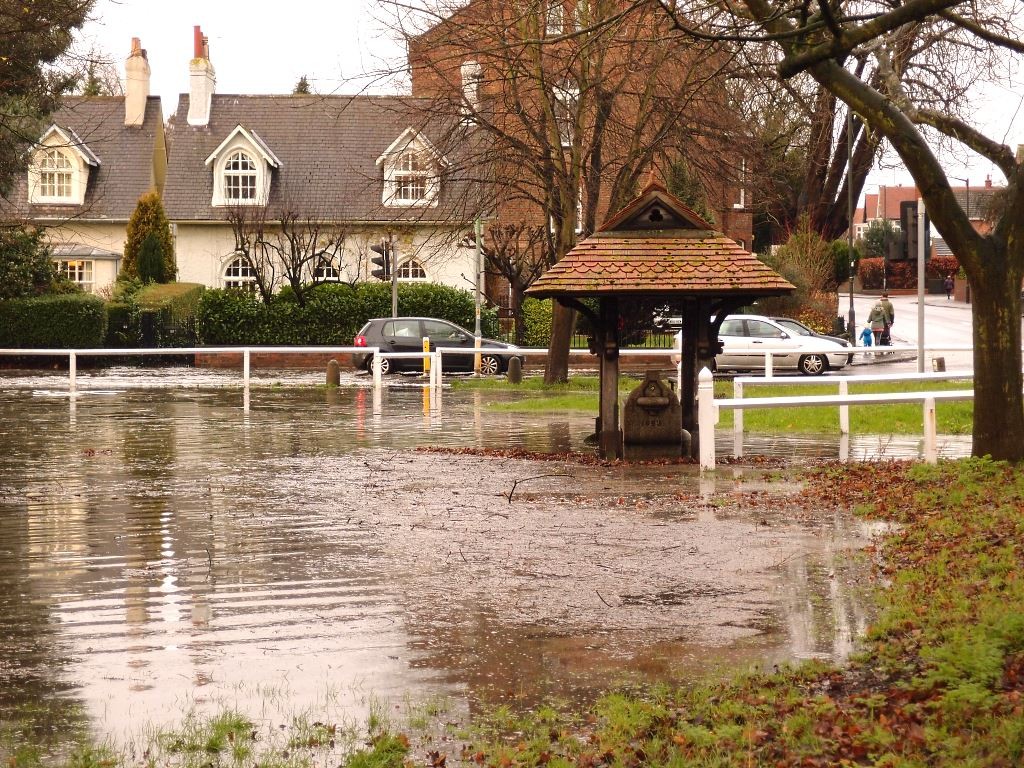 This used to happen a lot, and appears to have been much worse in the 1892 floods. 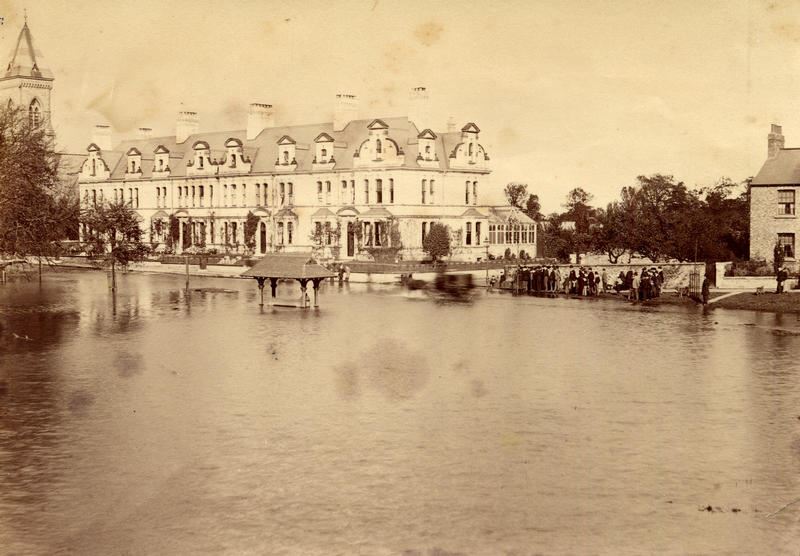 There are a couple of short stretches of the Burdyke still visible upstream at Clifton Backies. (This photo was taken today, not during the floods last week.) 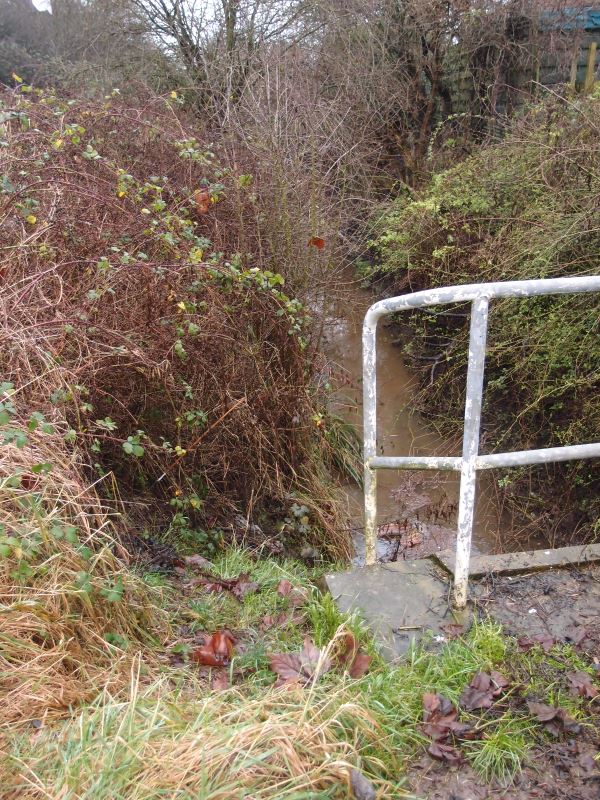 The rest of this watercourse, heading downstream, is culverted (piped in). But apparently it still follows the same course as it used to, heading towards the Ouse via Water Lane and then Clifton Green, and then under a centuries-old pathway from the Green (which is still a snicket), bending its way behind back gardens and under roads. Near the end of Westminster Road it takes a turn towards the river.

The flood alerts on Boxing Day had mentioned the Burdyke pumping station. I get the impression that the Burdyke pumping station isn’t a well-known structure. The pumps are apparently under the end of the floodbank behind St Peter’s, at the point where the path crosses from the river to the end of Westminster Road. At this point there’s a small brick shed behind the flood bank, and a concrete structure embedded into it. 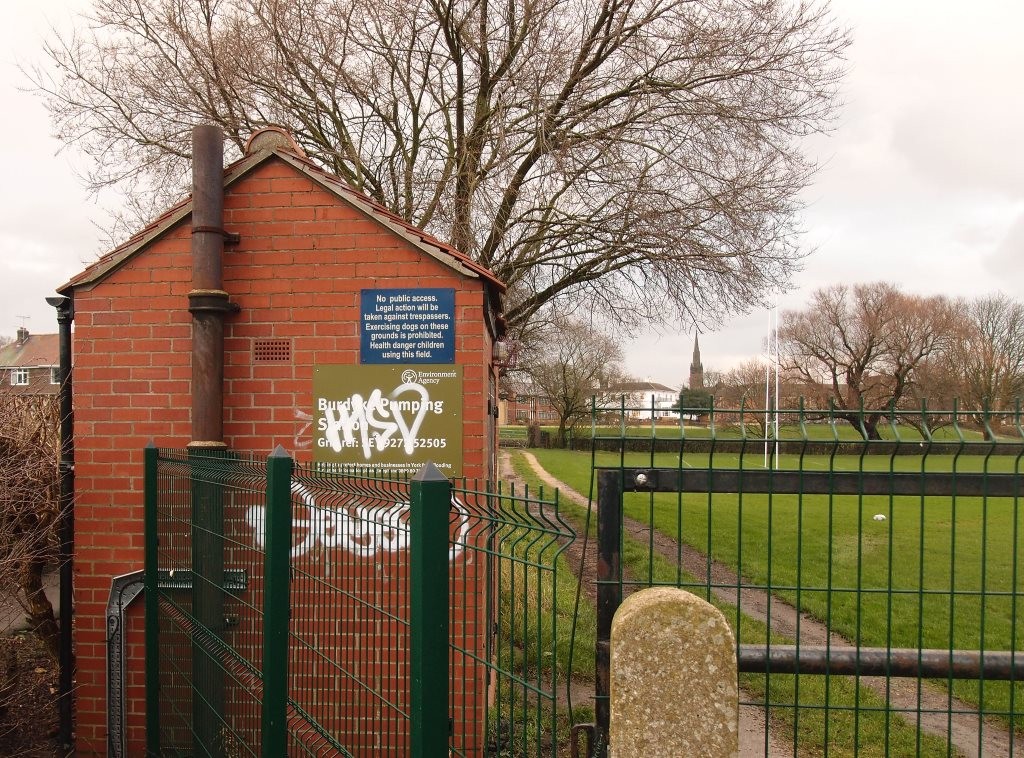 I’m sure I remember standing on the floodbank here during the floods of 2000 and hearing the noise from within, of the pumps, presumably, full-on and making quite a racket. Similarly in 2012, as mentioned on an earlier page.

On Boxing Day this year, after seeing the water on Water Lane and Clifton Green I followed part of the route of the buried Burdyke, towards the river, thinking I’d stand on the floodbank and from there get a better view on things, a perspective on how bad it was, having stood/walked there so many times before.

On the way, in this low-lying area on the old pathway/snicket by the school grounds, more evidence of what seemed to be the Burdyke bubbling up, near the end of Westminster Road. 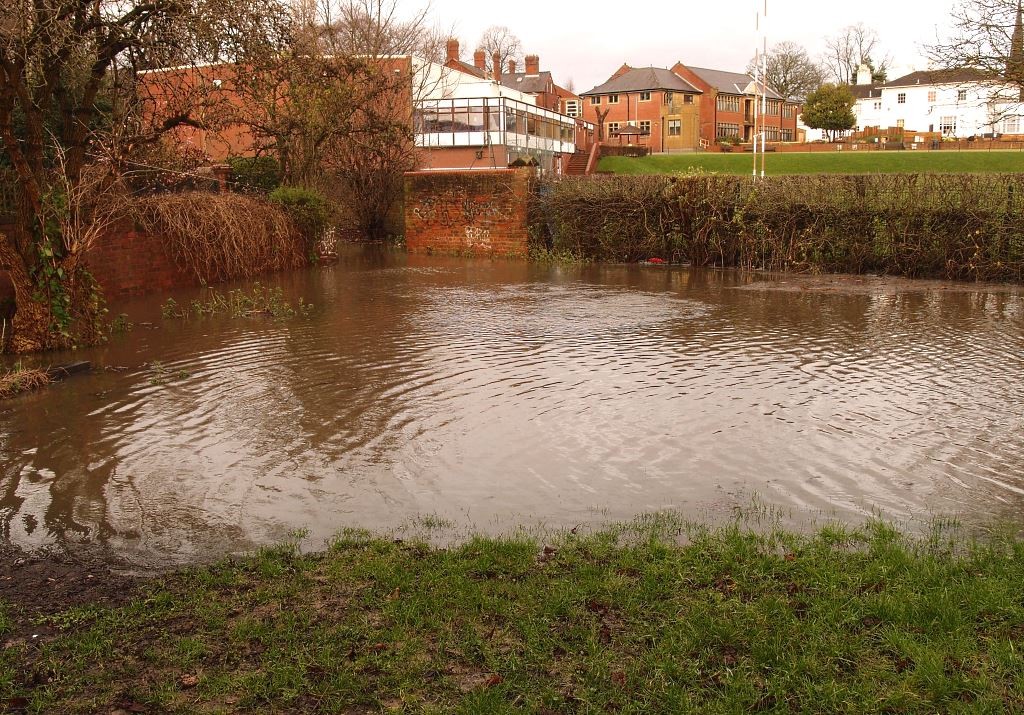 Then heading for the river, to survey the scene, the route became impassable in ordinary walking boots and would have needed wellies. I got as far as the brick building which is part of the pumping station for the Burdyke, but couldn’t get onto the floodbank beyond it.

It all seemed fairly quiet down there, with a few people on the floodbank itself, standing looking at the water. I’d thought I’d be able to hear the pumps doing their thing, but perhaps, I thought, I wasn’t close enough.

Later, reading comments on the Press website, I noticed a reader had mentioned that they thought those pumps at the Burdyke weren’t working. That they’d gone down to the riverside, (presumably via a different route or wearing wellies) and stood on the bank above the pumps, and thought that it all seemed rather quiet.

It could be that the Environment Agency have invested in extremely quiet pumps. Or that the person who commented on this online was mistaken. Or that the pumps had been turned off for some technical reason none of us understand. Or that they’d failed. In any case, as far as I’m aware the flooding of the Burdyke area doesn’t cause any flooding of homes, it just seems to produce a temporary lake for Clifton and inconvenience motorists.

The Clifton lake seemed to disappear very quickly, and by around midday the following day there wasn’t much of it left on Clifton Green. These two photos illustrate the change from one day to the next: 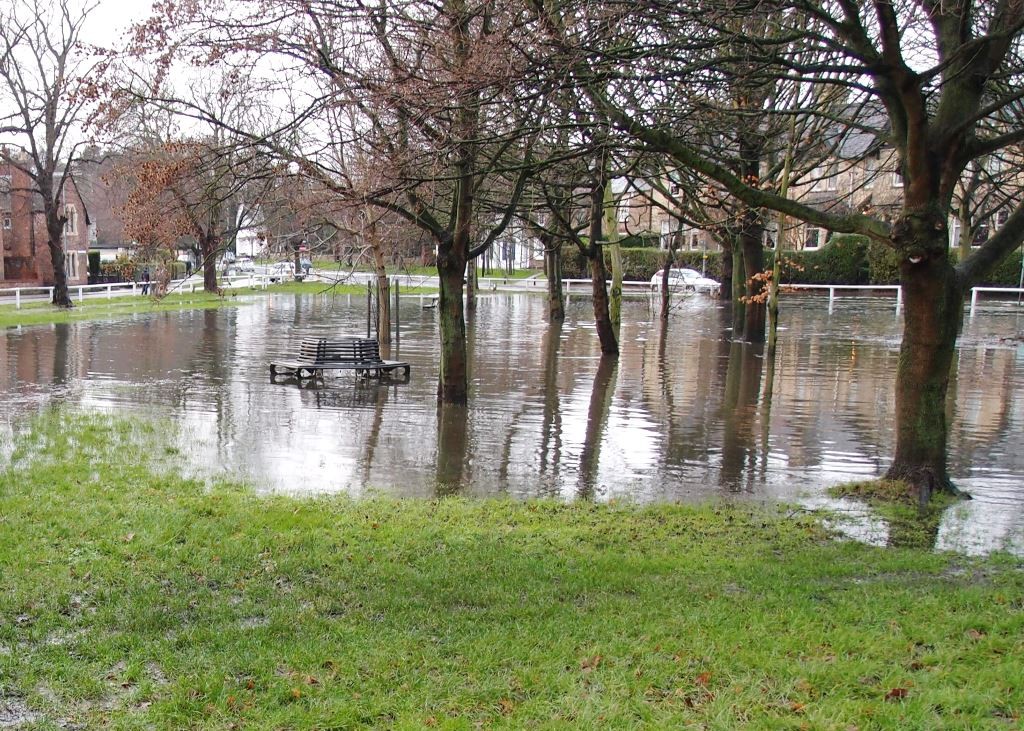 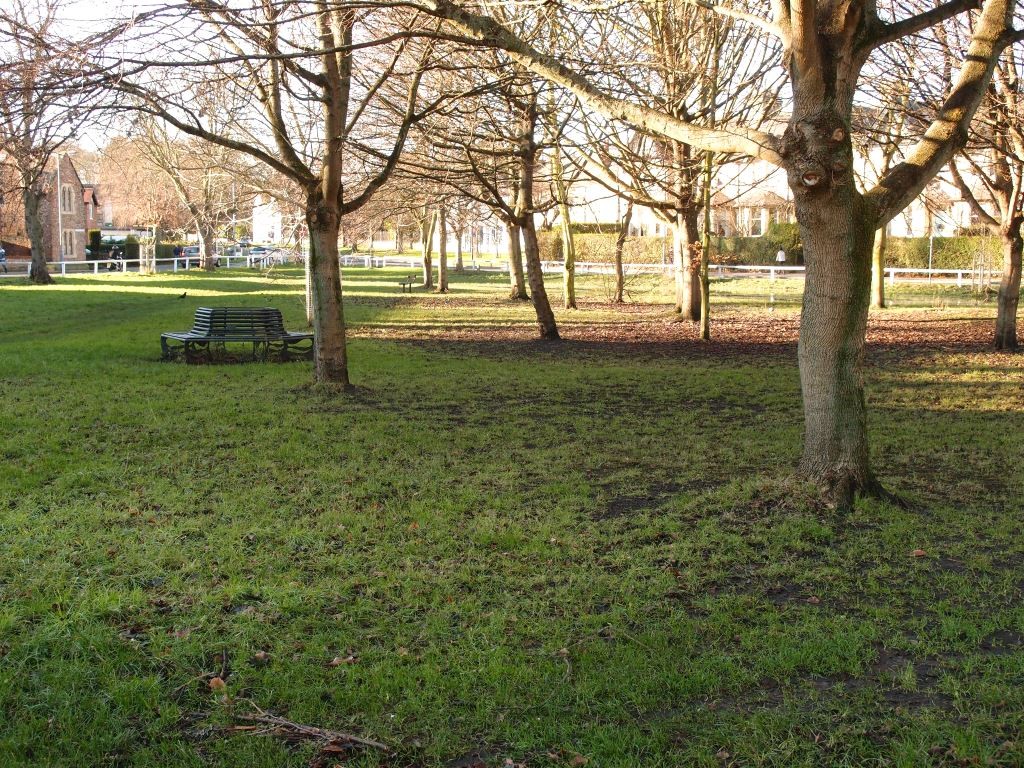 Which is quite impressive really isn’t it. There was a bit of water left on the Green the day after (see the first photo on this page), but not much. I assume this was connected to the Burdyke and its pumps? Were the pumps ‘overwhelmed’ (a word I think I’ve seen in connection with the Foss barrier pumps) and then recovered themselves and resumed pumping, and that’s why all this water disappeared again surprisingly quickly? Did the emergency services come along in the night and manually pump the floodwater away? Does anyone know?

I didn’t like to ask before now, as there have been more important things going on with the Foss at the other side of town. But it’s all linked, all these watercourses heading for the Ouse.

There may be big obvious rivers through the city, but there are also several rather important and ancient watercourses, and the Burdyke is one of them. The buried Burdyke, in times of over-capacity, seems to flood up and out to remind us of what the landscape was like in centuries past – just as the Foss did recently, reclaiming the old ‘King’s Fishpool’. We perhaps need more knowledge and understanding of our becks and dykes, the ‘ordinary watercourses’, as they’re called in the flood strategy documents. (Which contain more information on our becks and the Burdyke, should you be interested. The relevant links can be found on this page.)

I could go on, but I fear I’ve already overwhelmed readers with a flood of information. Thanks for reading. Comments and local insights (and expert insights from further afield) are welcome, as always. If any of the above is factually inaccurate, it’s not for want of trying. The information on the Burdyke and its pumping station is sparse and until recently it seemed fairly impossible to find any information on it at all.