From the archives, for a fee

[Update, July 2013 — since this page was written, I’ve been given permission to use City of York Council images on this website. Libraries and archives are now working towards more of a Creative Commons approach regarding the use of the images in the city council archives.]

Should the city council’s historic images of York be free to use online? Did you think they were? Not so. 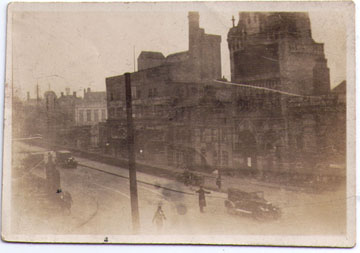 Old photos, aren’t they great? Well, this one isn’t that great, it’s faded and battered. Found in a pile of old family photos. But it prompted an interesting discussion, as old photos always do.

City of York Council’s online archive has many better photos of Tanner’s Moat. And many other photos relevant to aspects of York’s history discussed on these pages. I often link to them, because of that. If they were free to use I would include them on the page, but they’re not.

Recently I’ve seen so many old images of York from the CoYC archives (and The Press) posted on Facebook that I began to think they must have all been released into the public domain at some point without me noticing.

An employee of the council had told me last year that their images were copyright free, which is why one of them appeared on this website for a while. Until I checked, found they weren’t, and removed it again.

I wish I hadn’t checked. I wish I’d just got a load more. Everyone else has, after all.

If you want to use photos from the city council archives a fee is payable. Well, if you’re polite/stupid enough to ask …

The fee is negotiable and depends on what the photos are to be used for, but, and this is the important point, the archive is ‘mandated by Councillors to charge a fee for reproduction of CYC copyright images’.

In 2012 the standard charge was £30 per image for a world license (required for a website).

If archivists are mandated by councillors to protect the images they own it seems odd no one’s pointed this out on Facebook, in a public kind of way, where the theft is most obvious. So many council departments have a Facebook presence. It would presumably be easy to post ‘This image is copyright protected and we are mandated by councillors to charge a fee for its use’. But I haven’t seen that posted anywhere.

So as it is at present, if you do the right thing and ask the council if you can use images from their archive for free they say no, but if you just grab a copy of them and stick them up on Facebook then that’s fine and no one says anything.

We’re all aware that we’re fighting a losing battle and that once any image is online it will just be grabbed, regardless. But perhaps it would help raise awareness of copyright and intellectual property and image licensing if the larger organisations made at least some effort to point out that their images aren’t actually there for the taking.

It might be easier just to let them go, and change that mandate. Many people I’ve spoken to think that photos owned by City of York Council should be freely available for residents to use without charge, as ‘we pay our council tax’.

It couldn’t be restricted to York council tax payers, of course — on the web they’re open to everyone. Also, their online archive is complicated, as it includes images from regional newspapers and many other copyright holders, not just City of York Council owned images.

But perhaps many of the images owned by CoYC should be in the public domain. As I can see many already are, unofficially. And maybe there’s nothing wrong with that.

The council’s collection of images includes some conventionally attractive and desirable photos of York. I can see why they would want to hang on to their rights to these, and sell them. On the other hand the archive also includes many photos rather dull and obscure and of very limited interest.

I noticed images posted to Facebook of the construction of streets in Chapelfields, in Acomb, York. The only people who would be interested in those are people who grew up there, or who remembered them being built, or people in years to come tracing their own histories. The images have no commercial value and the city council would never make any money from them.

Similarly, years ago during family history research I found a brilliant image in Hull council’s online archive. Brilliant only to me and to a handful of other people in the entire world — the local authority happened to have captured some ordinary terraced houses where my ancestors lived, before those houses were demolished. The local authority images are probably the only record.

Being stupidly polite — a habit I might give up online — I asked about permission to include the photo on a website about my Hull ancestors. They said no. Because they had to protect their images against misuse.

The image in question was a photo of an ordinary terraced house in Hull. Very little chance anyone but me would want it. I was also adding my own ‘value’ to their image by adding to its history, linking to it the names of some of the brief lives lived there, which I happened to know about.

That was around six years ago, but I haven’t forgotten it, and was reminded of it when seeing those photos of the Chapelfields estate, owned by our own local authority.

They also have many images of the Groves area of York, home to so many families who lived in the terraced streets since demolished, where the blocks of flats are. If I worked in the archives I’d feel mean having to say in response to an enquiry to put one of these on a family history website or on Facebook ‘We are mandated by councillors to charge a fee’. For a photo of a street of terraced houses? You’re kidding me …

How ‘Britain from Above’ handles it 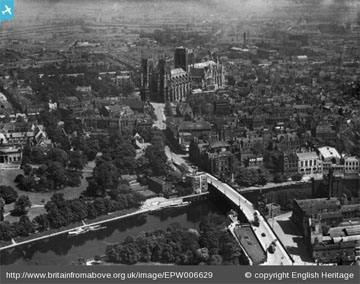 Perhaps the council has to accept that it can’t control what happens to its images online, and change that apparently ineffective mandate. It could retain a link of ownership by adding a mark of some kind — the city arms logo seems appropriate — in the top corner of the photos. Rather like has been used in the fantastic collection of aerial images on britainfromabove.org.uk.

I emailed them too to ask about permission. They have since added to their terms of use to make it clear that images can be used for free in personal websites and blogs, with the appropriate link, and with their logo left intact.

If they can do that, why can’t the city council do something similar? It seems they need to change their mandate, as it’s clearly not enforceable online.

If they want to keep the mandate to charge then they have to make more effort to enforce it fairly and consistently, which would probably require an extra team of archivists just to police Facebook, where scores of photos from their archive are posted every week.

I wonder what others think. Your thoughts welcome below.

By Lisa @YorkStories • 17 June 2013 Opinions, thoughts, Web/website matters To link to this page's proper location please use the > permalink.