Where Scott’s was: Petergate 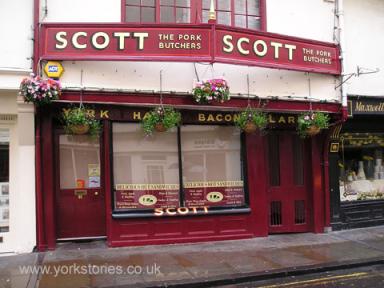 Before leaving the subject of long-established local businesses, here’s a photo of Scott’s butchers on Petergate, taken in June 2007. It closed in 2008 after 130 years of trading. 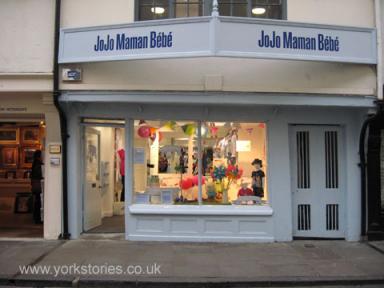 Here’s the shop in April this year. Now a branch of JoJo Maman BéBé. Photo taken because the contrast between how it was and how it is seemed so striking, and somehow representative of bigger changes.

The ‘Lard doorway’, as I called it, was my favourite part of the Scott’s frontage. Through the pale blue tasteful paint if you’re close enough you can still see the outline of LARD above the gateway to the side of the shop, a ghost of the former business. 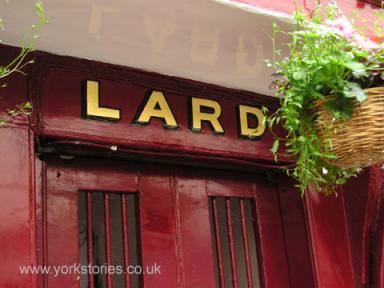 The old shopfront was loud and proud in proclaiming its business name and its lard, bold gold lettering with a shadow in black, on confident red. We are Scott’s, and we sell LARD. (The placing of the word above that side gateway/door made it look like this was a special separate entrance for the purchase of lard.)

It looked very traditional, smart. And also, continuing the theme of the previous two pages, rather ‘manly’. Whereas its current incarnation is about as feminine as you could get. Soft colours and a gentle soothing name, tasteful and nice.

Scott’s didn’t close because of lack of business. The reasons were explained in a story in The Press, see the link below. Access for delivery vehicles seemed to be a contributing factor. Something I imagine will only become more difficult with increasing restrictions, eg the forthcoming closure of Lendal Bridge. Maybe shops will have to resort to having deliveries dropped by helicopter from the sky.

By Lisa @YorkStories • 14 June 2013 Shops, businesses
Tagged  shops
To link to this page's proper location please use the > permalink