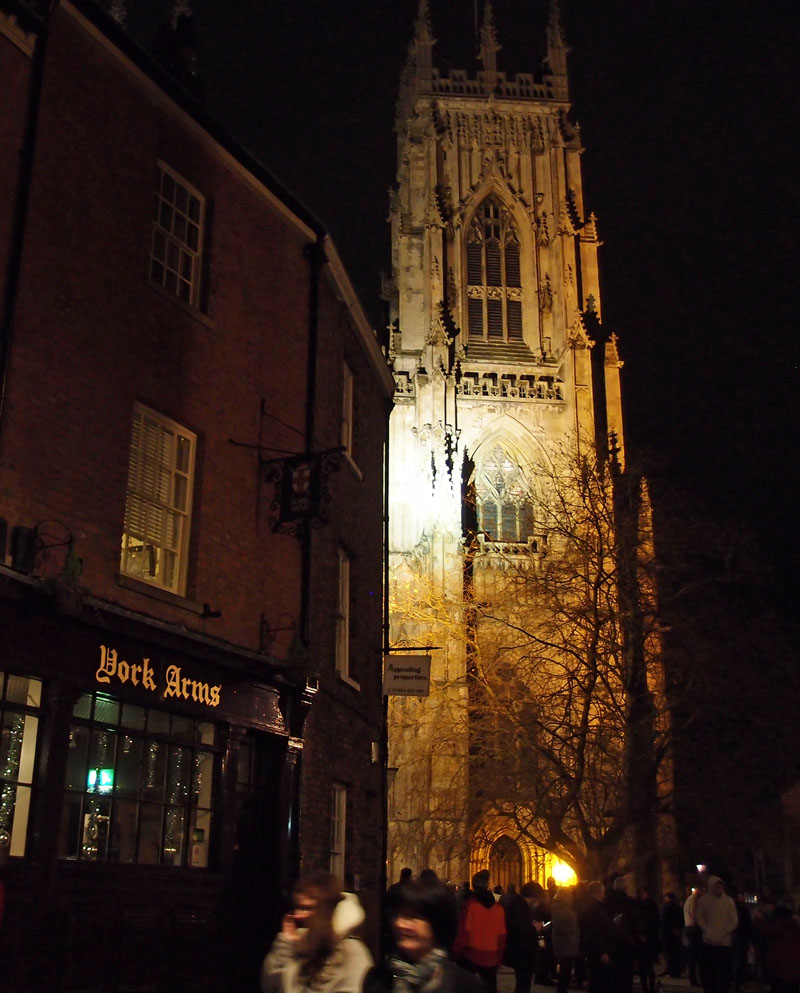 It’s now a few days into this new year of 2017, which was welcomed in by the Minster bells, though it had looked unlikely that it would be. I don’t want to write about the ongoing difficulties (I attempted to do so, back in October), but I do want to write a bit about bells and their ringing, here at York Minster and elsewhere, with some historical notes and queries.

Firstly, I’d like to say how much I appreciated hearing the Minster bells at this particular time in this particular year, as it marked 30 years since I first stood here by the Minster at midnight on New Year’s Eve and heard them ring as one year turned to another.

Or rather, back in 1986, as it turned into 1987, I was in one of the doorways of the York Arms, also pictured in that photo above. After a recent excavation of my pile of old diaries I’ve managed to relocate the ancient yellowing handwritten document, a diary page written in early January 1987 describing events as I remembered them: that I was in the York Arms, wasn’t expecting to hear Minster bells, was more concerned with looking for a friend who had disappeared from the busy pub. That I went to the door to look for them outside, and then experienced that magnificent massive sound so close, suddenly ringing out, welcoming 1987.

The pavements around weren’t filled with people back then. Barely anyone there, as I recall.

This New Year, after dashing up Bootham in the last half hour of the old year, we greeted midnight in the middle of a huge crowd of thousands at the end of High Petergate/Duncombe Place/Deangate. It was virtually impossible to hear the bells over the crowd noise and loud voices of people around us. Moving through the throng to the end of Precentor’s Court made the bells audible at last, hurrah.

The reason I’m mentioning and comparing the ringing in of 1987 and 2017 is because of recent confirmation that it was at that New Year, 30 years ago, that the tradition of ringing in the New Year at the Minster restarted. There had been a gap of 50 years in that particular traditional New Year celebration, apparently because of alleged vandalism, bottles being thrown by revellers at the Minster’s west front. 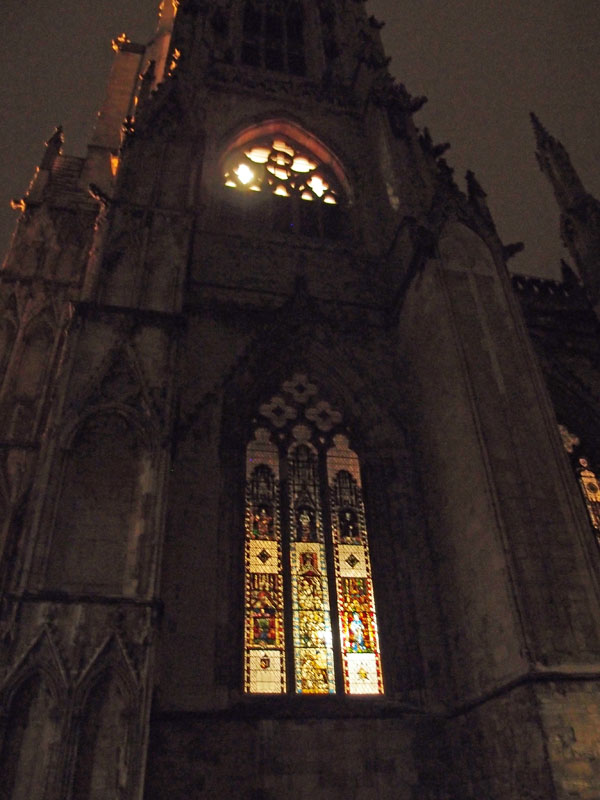 I was a bit unsure about this ‘for 600 years’ thing, because I kept thinking about the war. Not that I was around then, but my understanding was that during World War Two, or at least for much of it, church bells were silent, and were only to ring in the event of an invasion. I kept hoping that if that were the case someone would point out the error in these headlines. But it just kept being repeated over and over.

So perhaps York Minster had special permission, perhaps all cathedrals did, perhaps all through the dark days of World War Two its bells rang out jollily on Christmas Day?

I went in search of facts. A BBC History page notes that on Christmas Day in 1940 (‘the first war-time Christmas of World War Two’):

church services happened as normal (bomb-damage permitting) but bells were not allowed to be rung, as this signified an invasion

Far more interesting though, and a good example of the wonders of the internet and how we can set out on a boring fact-checking thing and find a gem – I also discovered the Hansard transcript of a debate in the Lords on 31 March 1943: RINGING OF CHURCH BELLS.

Which begins: ‘THE LORD ARCHBISHOP OF YORK moved to resolve, That the ban on the ringing of church bells should be now lifted or modified.’

Yes, coincidentally, our very own Archbishop of York. Who, at the time, was Cyril Garbett. He continued:

There are, of course, some people who hate bells and they will regard the silence of the bells as one of the only alleviating compensations of the war. But the great majority of people deplore the silence of the bells. We who are members of the Church of England regret most deeply that our bells a re not allowed to be used in the tradition al way to summon people to worship. It is, however, not only members of the Church of England. There are large numbers of people who are not greatly interested in Church matters who miss the bells, and that is specially so in the country districts. Psychologically I am quite certain this silence of the bells has a very bad effect on the people.’

It’s a wonderful speech, for the insight it gives into life at that particular time, during World War Two. Noting how certain regulations have been relaxed already, he notes, poetically:

‘Even sign posts are beginning, it is true somewhat shyly and coyly, to point timid fingers to towns which no one could mistake.’

But back to the bells and their ringing, throughout the land. Lord Mottistone, in response, notes that ‘the ringing of them adds to the joy and happiness of our lives’.

Very much of its time, this debate, and in some ways so quaint and distant, as Lord Quickswood talks of the servant’s bell, which apparently could be rung expressively to denote ‘the rebuke for neglect or delay’ on domestic matters. Other observations perhaps still ring true today, like his point that it is ‘not the great danger, it is not the fear of something very terrible, that demoralizes people; it is the constant vexation of petty restrictions.’

It’s really worth reading the whole thing, with its often rather splendid language, phrases like ‘all my large-scale peregrinations’.

But to go back to the matter in hand — evidence suggests that ‘Bells fall silent at York Minster for first time in over 600 years on Christmas day’ is perhaps not a factually correct headline. If it is, then I’d appreciate sources, further information, etc. If it isn’t, then perhaps it adds to the whole bigger debate about whether media sources do fact-checking anymore. Just a small thing, on the grand scale of things, but I noticed it, and wondered. And in wondering, I read about shy signposts and the like, so time not entirely wasted.

Back to the present time 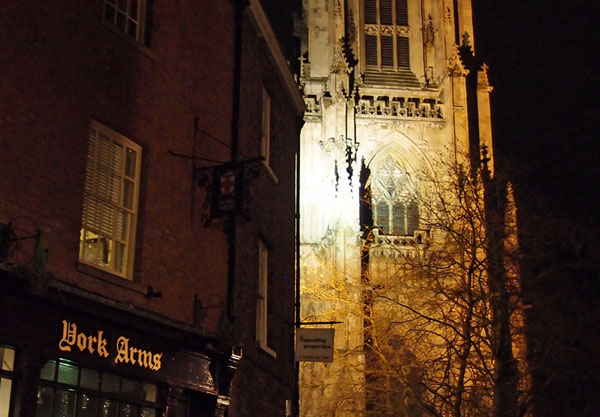 And from one Archbishop of York to another, and back to the 21st century. I really didn’t expect to hear the Minster bells to mark this new year, mainly because of comments made by John Sentamu, Archbishop of York, in an interview just before Christmas:

“And also people need to remember, the tower doesn’t belong to the bellringers, it belongs to York Minster …

And the other thing I would say, bells are ringing, not for people’s enjoyment, they’re being rung for the glory of God, they’re singing out, the glory to God in the highest, that’s what it is all about, and people must never forget God when they talk about ringing bells. It is God first, your neighbour second, alright?

Archbishop of York, John Sentamu, in an interview on Radio York, 22 Dec 2016

I heard this live when it was aired and was so struck by it that I went back to the recording and transcribed this part of it.

Archbishop Sentamu made a confident statement about what the bells are ‘for’. But clearly they have a long and complex tradition far deeper and wider than that. We were going to use them as a rather primitive alert system, in a wartime situation, and church leaders were perfectly happy with that, at least for a time. And when the bells rang out at the end of the Second World War, to celebrate the end of that particular armed conflict, it was thought culturally significant enough to record, as previously noted here on these pages.

Perhaps recent events regarding the bellringing at York Minster have made many of us think more, in more depth and detail, about how and when those bells normally ring. There’s interesting information on the website of the York Minster Society of Change Ringers, with a page on the northwest tower and on the southwest tower, and how the bells are rung in different ways. 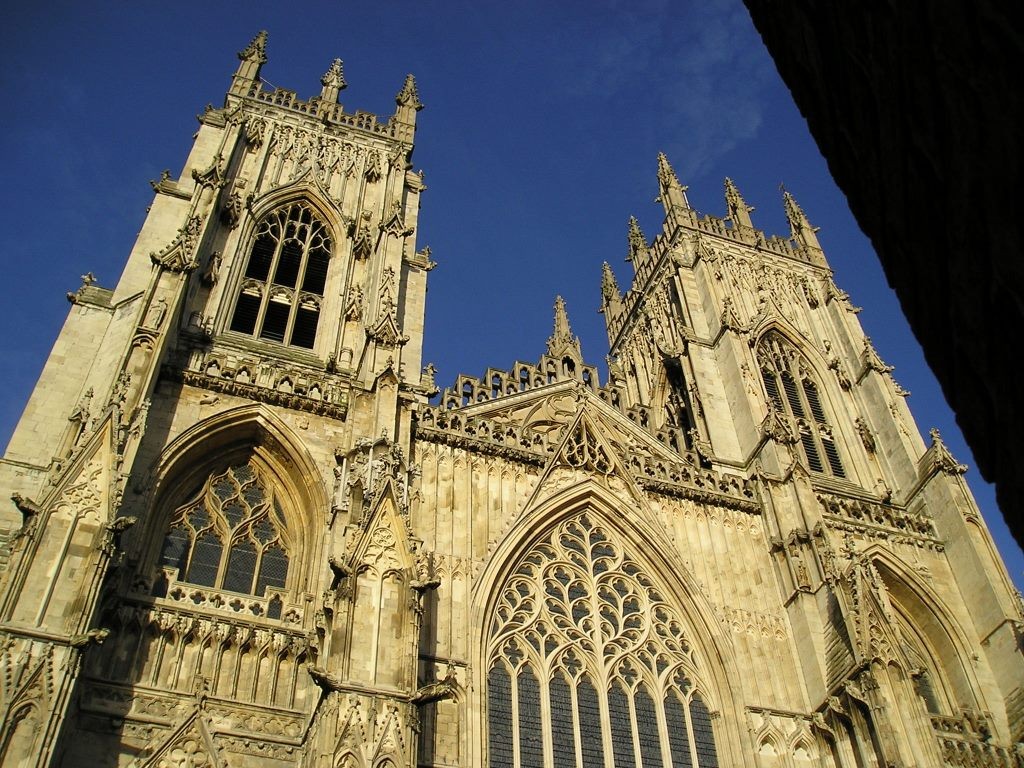 Also interesting to read that there’s a project to get the bells of St Helen’s church in St Helen’s Square ringing again, as featured in a recent piece in the York Press.

If you have historical information/clarification, thoughts on bellringing in general, memories etc, comments are welcome. I don’t want anything personal/abusive about any of the parties involved in the bellringing dispute at the Minster and these will be removed. Thanks for your interest and your understanding.

By Lisa @YorkStories • 5 January 2017 Histories, Opinions, thoughts
Tagged  Minster
To link to this page's proper location please use the > permalink