Minster bells, and a man on a motorbike playing bagpipes

In the excellent displays at the Yorkshire Air Museum at Elvington I read a description of York on the night of VE day, as remembered by Philip Moyes. York Minster was lit up for the first time since 1939. A city centre dance hall opened its windows so people outside could hear the band, and they were dancing in the streets.

The following morning, ‘the slopes around the ancient city wall were strewn with sleeping Canadians’ and the only thing still moving was a motorcycle. ‘One Canadian was driving it and another was sitting backwards on it playing the bagpipes.’

Old Minster bells, on mid-20th century 78, on portable record player, via video camera, via internet, to you & me 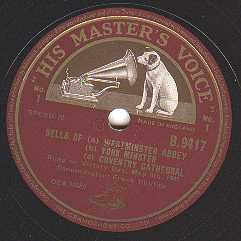 Ah, isn’t the internet wonderful sometimes. I was searching for some York-related thing on YouTube, and stumbled upon a recording of cathedral bells ringing on ‘Victory day’ at the end of the war.

Not just any old cathedral bells, but our own Minster ones, included on this short recording. The Minster bells come after those of Westminster Abbey, and are followed by those of Coventry Cathedral. You’ll hear them announced by one of those wonderful BBC voices of the time. It’s all rather crackly and ‘lo-fi’, but it’s all the more charming for that. Do read the bit of info on the page about how you come to be watching an old 78 going round on a turntable. All the combined factors added to the sounds of the Minster bells made me cry. But then I am a soppy old fool.

A bit of research revealed an interesting web page on old documentary 78s which includes this picture of the label of the ‘Victory Day bells’ recording (see last entry on page), as well as many other documentary 78s, putting them in context.