Wharram and the Wolds /2

This ruined church remains as a reminder of the lost village. 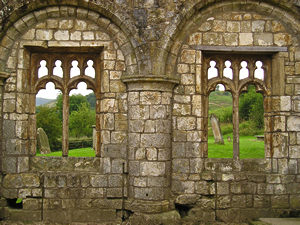 Archaeologists’ excavations revealed how the church changed shape and size over the centuries, at one stage reflecting the need of the community for a larger place of worship, then shrinking again. Now mainly open to the elements, its remaining stonework also shows the changes and developments over the years, and how materials were reused or altered. 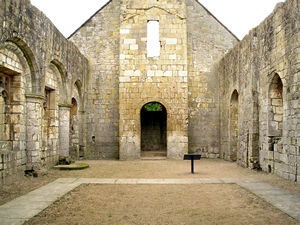 Even though the weather was cloudy at the point when these photographs were taken, the light still pours in to the interior of the church, as there’s no roof to keep it out. I found it, in many ways, far more beautiful than the usual church interior, as the stonework could be seen more easily, and it seemed more ‘godly’ because of the simplicity of stone and sky. It felt more spiritually significant than other churches with the more usual roof. Perhaps all churches should be open to the sky. (Though this of course wouldn’t suit the congregation or the furnishings.) 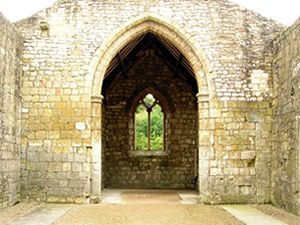 I’m not a practising Christian but I love churches, and the way they are dotted around the landscape, even in the tiniest villages. Ruined churches – when preserved and cared for, are perhaps even more meaningful. A constant, through all the changes in the landscape, that we strive to hang on to, even when they’re officially ‘redundant’. In this church, as I read the information board about the changes over the centuries, the way the church grew, then shrunk, I could picture the flow of people through this building over the centuries, as populations rose and fell. 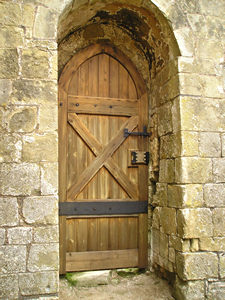 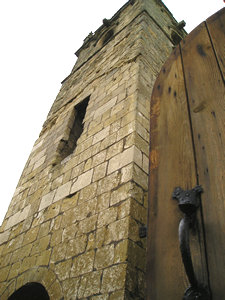 My attention was drawn to these extremely handsome wooden doors, which had obviously been recently made, and from the smell, perhaps also recently treated with woodstain. It seemed odd to have a pair of wooden doors in a building with no roof and no glass in the windows, but they certainly enhanced the old church, being so beautifully made.

Above, right: one of the doors is shown next to the partly tumbled-down tower of the church. They were so solid and heavy, but I was determined to capture the image of the handsome door next to the tower, and finally achieved this by propping it open with my foot and balancing precariously on one leg. Not a position generally conducive to taking an unblurred photograph, but thankfully it worked. 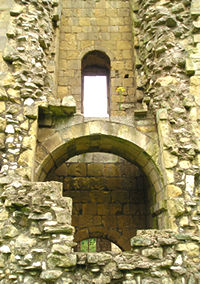 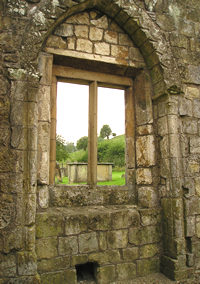 Left: the exterior of the church tower. The Pevsner guide tells me that by 1949 the church had stopped being used for services, and that a storm in 1959 caused the collapse of this tower.

Right: detail from the interior, of one of the (now unglazed) windows. 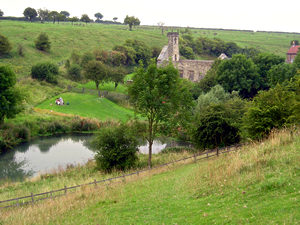 We leave the old village via the path taking us past the mill pond. This view, looking back, shows St Martin’s church in the distance. The rest of our walk, described on the following page, takes us along the edge of the beautiful Deep Dale, by arable fields, and back to Wharram-le-Street on a narrow Wolds road.