Wharram and the Wolds /3

3 – Wandering on the Wolds

It was evening by the time we’d looked around Wharram Percy and St Martin’s Church. The remainder of the walk followed a route high in the Wolds, across fields and along a narrow road. 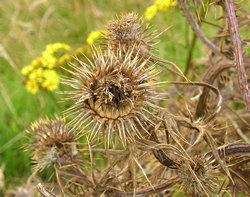 Though
cultivated plants in gardens are generally still full of flower in August,
the wilder landscape showed many signs of the approaching autumn. The wildflowers
and grasses throughout our walk were noticeably full of seedheads, and the
general impression was of green turning to autumn’s shades of brown and
gold. 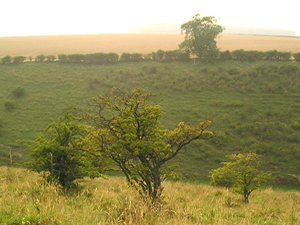 This
part of the walk took us along the top of Deep Dale, where the sun was setting
over the fields on the other side of the valley. The sun was rather hazy,
again giving an impression of autumn. Hawthorn trees were full of berries
already red, and a flock of birds flew ahead of us, from tree to tree. Apart
from the birds it was still and silent. 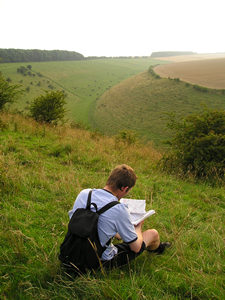 6.30
– the dale in the evening sunlight. There were cattle grazing at the bottom
of the valley, and evidence of human habitation in the ploughed fields on
the other side of the dale, but otherwise it felt like we were in the remotest
place, or in another age – perhaps the time of the medieval villagers of
Wharram Percy. 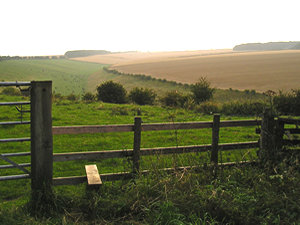 The route of the walk took us away from Deep Dale where it bends to the
right. We took a left, over a stile into a field. This photo shows the view
looking west, back to Deep Dale. It’s not often that I’ve been out walking
in the countryside so late in the day, but our late start on this walk meant
we saw this area in the evening sun, which seemed to highlight the contours
of the land.

Perhaps because of the effect of the light, or perhaps because
we’d seen the remains of Wharram Percy, all the history in this landscape
seemed more obvious – and more meaningful – than usual. 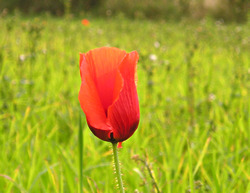 At
the edges of the field, a few poppies were bright against the green grass,
and even more brilliant with the low sun behind them. 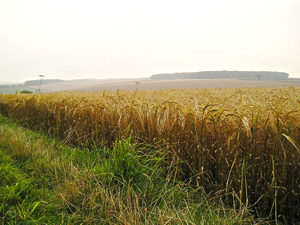 Looking
back still, towards the west, as we followed the path along the edge of
the field. The field was full of mature crops, presumably waiting for harvest.
Elsewhere the harvesters were busy in the fields we had passed, but we were
glad that this field hadn’t yet been cleared, as the golden corn reflected
the late sun.

All through this walk I’d been conscious of how many farmers were working
hard on the land, bringing in crops that would feed us. Though it’s easy
to forget the food producers when we’re grabbing our products off the shelves
at Tesco. 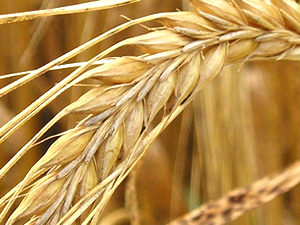 It’s
rather beautiful, in close-up, isn’t it? A whole field of this was waving
around, giving a general impression of abundance, and I realised how much
we take all this for granted. I also realised that I’m not very clued-up
about cereal crops. I thought this was wheat, but think that it’s probably
barley. I found a couple of interesting websites full of information on
agriculture, helpful for townies like me – details at the foot of the page.

The
path left the field and skirted a piece of woodland, within which, the OS
map told us, are air shafts. We thought we discovered one, near the edge of the wood, as an area was fenced off as dangerous. It was all rather overgrown, so it wasn’t possible to see anything interesting, but we were looking for these features because they are apparently air shafts for the Burdale Tunnel, which emerges some way further along to the south. The tunnel – now abandoned – carried the railway line, part of which we walked on page 1.

The Pevsner guide brought the existence of the Burdale Tunnel to my attention. It says that the tunnel, just over a mile in length, was constructed in 1847-53, and is ‘a remarkable piece of Victorian civil engineering’. Though remarkable, it is no longer visible, and has gone the way of so many other feats of Victorian railway engineering. 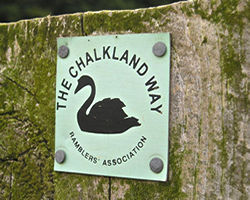 As
we left the field and wooded area this waymarker was noted on the fence
post. I realised that this is yet another long distance walk that I hadn’t
been aware of. A quick Google brought me to The
Chalkland Way home page, which explains that this route is a 40-mile
circular walk across the Wolds. I was glad we weren’t doing all 40 miles
of it, but were hoping to be back at the car in less than 2. (I realise I’m starting to sound a bit grumpy, but we’ve been out here for hours, I’m a bit tired, and it feels like the next part of the walk will be a bit dull.) 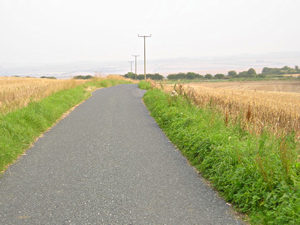 Most
of the rest of the route was along this narrow road across the top of the
Wolds. The view is probably an uplifting one usually, but the light was
rather poor and hazy by this stage, so the distant vistas were lost to us.
All we could see was a road stretching on apparently forever, with flat
fields on either side, and the occasional telegraph pole. This is the view
looking back along the road, but the view in front was exactly the same. 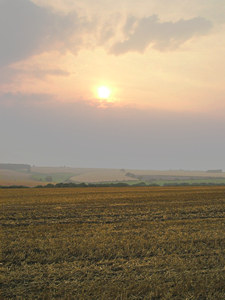 It
could have seemed rather dull after the interesting landscape at Wharram
Percy. But the sunset over the fields enlivened the view. The road ahead
seemed endless – we could see it stretching on over the brow of the next
hill some distance away, and I began to wonder what it would have been like
for the travellers of old.

The crops here had been harvested, and only the stubble of stalks remained. Between them wandered large flocks of birds – young or female pheasants we thought – and on hearing our approach they squawked and grumbled and dashed off away from us, across the sunset fields.

After their sudden noise, everything would fall silent again, with only the sounds of our footsteps on the road. 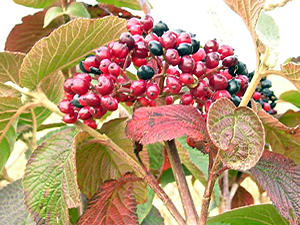 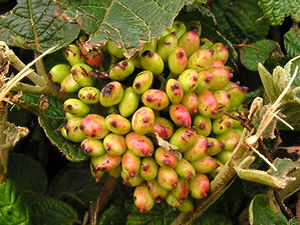 At last, as the road bent round to the right, our path took us straight ahead
into a field, on the other side of which was the road where we started our
walk, at Wharram-le-Street. As we crossed the field at the edge I noticed
the hedgerow, and particularly this rather beautiful berried shrub, which
was the only bright thing in the rather dull dusk-darkened landscape. I
think it’s a viburnum. Its berries end up very red, after turning an interesting
range of intermediate shades. Beautiful thing.