During the Second World War, Yorkshire was home to around 40 airfields, many in the flat areas of the Vale of York. More than 18,000 airmen died flying from the Yorkshire airfields, some lost on training flights, because of weather conditions or aircraft malfunction. The memorials here are just two of many. Both these aircraft were on training flights, and both crashed within a week of one another, in February 1944. 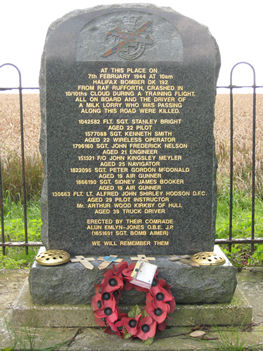 There’s something particularly moving about finding a memorial, by chance, in a place you wouldn’t expect. We were out in the car heading for a village off the A166. We missed the turning and had to turn round in a layby. At the edge of the layby, in front of a cornfield, was this memorial, erected by Alun Emlyn-Jones, remembering his comrades.

The inscription states that the memorial marks the location where, on 7 February 1944, at 10am, Halifax bomber DK192 from RAF Rufforth crashed in 10/10ths cloud during a training flight, killing all the crew. The driver of a milk lorry, Mr Arthur Wood Kirkby, who was passing on the road, was also killed. 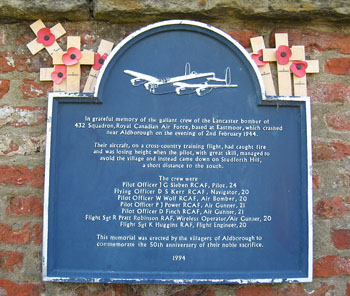 The villagers of Aldborough erected this memorial in 1994, to mark the 50th anniversary of another Second World War crash, which occurred on 2 February 1944.

The Lancaster bomber, of 432 Squadron, Royal Canadian Air Force, was another bomber on a training flight. Five of the crew were from the Canadian forces, two from the RAF. Flight Sgt Kenneth Huggins was a Yorkshireman, from Bradford.

The inscription records that the plane had caught fire, and was losing height, but the pilot ‘with great skill, managed to avoid the village and instead came down on Studforth Hill, a short distance to the south.’

It is clear, as you read these details, why the memorial was erected not just ‘in memory of’, but ‘in grateful memory of’.

Click on the photo for a larger view showing the names of the crew.

www.yorkshire-aircraft.co.uk – containing information regarding the many aircraft accidents in Yorkshire.

Chocolate and Chicory: York and beyond, by bicycle. My book includes further information on the airfields around York, and mapped cycle routes from York visiting some of them. Chocolate and Chicory is an exploration of the local landscape, its stories and histories, via themed journeys along the cycle tracks outside the city walls and the country lanes beyond the ring road. Can also be enjoyed from the comfort of your sofa. Read more …