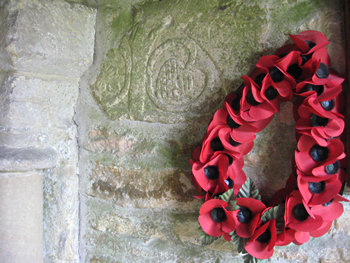 In the porch of the church at Scawton, near Helmsley, a sign explains that the plaque now displayed here was originally attached to a tree some distance from the church, the site of the crash, ‘until the tree fell’, when it was relocated to the church porch, where it now lives, among a carefully arranged display of wreaths and crosses, resting against ancient stone. 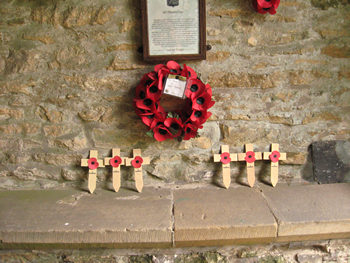 Five Free French airmen, based at Elvington airfield, died on their return from their 38th mission. A build-up of aircraft needing to land meant they flew north to await their turn. With the aircraft’s instruments damaged, and with zero visibility, they crashed near Scawton, the plane scattering debris across fields before coming to rest. Only two of the crew escaped the crash – the others are remembered here in the small porch of a quiet rural church in Yorkshire.

For more details, and names, see the Airfield Archaeology page on this memorial. 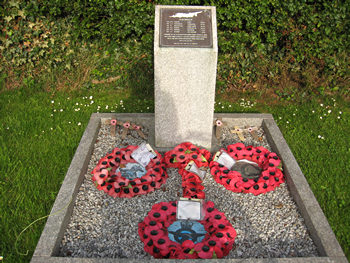 Closer to home – another memorial, in Newton on Ouse, a village outside York. It remembers six crew, Canadian and British, based at the nearby Linton on Ouse airfield, who crashed while attempting to return to Linton airfield, at 4am on 9 June 1944.

For more background on the crash, and the setting up of this village memorial, see the very informative Newton on Ouse history site: Air Force memorial.

See also: the memorials placed at crash sites on Garrowby Hill and at Aldborough.