‘One whose quiet voice has still a message for this weary world’. 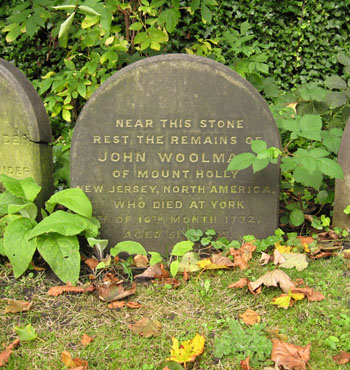 This gravestone, in the Quaker burial ground in Bishophill, stands out from the others around it in the amount of information it carries, though it’s the same small, rather humble, curved-top stone.

NEAR THIS STONE
REST THE REMAINS OF
JOHN WOOLMAN
OF MOUNT HOLLY
NEW JERSEY, NORTH AMERICA,
WHO DIED AT YORK
7TH OF 10TH MONTH 1772
AGED 51 YEARS

This city has many famous graves. One of the favourites is the grave of Dick Turpin. I’ve never understood why. Around his legend there’s a load of old guff about riding from London to York in about 10 minutes, on some poor old horse. Or it might be someone else’s legend. I don’t care. Anyone can drive a horse till it’s nearly dead. Many did, famous or not. More respect to John Woolman. He walked here. 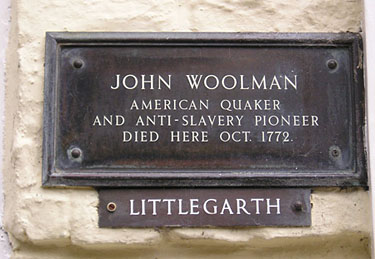 John Woolman died of smallpox, at the home of Thomas Priestman, a Quaker tanner. The house, Almery Garth, on the corner of Marygate and Marygate Lane, is marked with a plaque.

He wanted to visit Quakers in the north of England, particularly in Yorkshire, and had set sail on a Quaker-owned ship on 1 May 1772. One American Quaker wrote ahead to a Friend in England, of Woolman: ‘He is a Friend in good Esteem among us, of blameless Life, a good understanding, and deep in spiritual Experience, tho’ singular in his Dress & deportment.’ (Eccentric, I think he means.)

I’m not an expert on 18th century norms and values, but it seems that John Woolman was ahead of the prevailing ‘wisdom’ of his time – as eccentric/‘singular’ people often are. He is celebrated for his opposition to the slave trade. Less often mentioned is his awareness of the suffering of animals. His journey from London to York was undertaken on foot because he was distressed by the way horses were driven too hard.

Reading accounts of his life I was struck by how ‘modern’ and relevant many of his beliefs were. I guess we’d say now that he lived by his principles, in living a simple life and rejecting certain goods (such as dyed clothes) because of associations with the slave trade. This kind of principled existence is difficult to accomplish now, in an age more accepting of variation and the ‘unconventional’ singular soul. Must have been even more difficult then. Respect to John Woolman, who in his adult years tried to live his life without doing harm to man or beast.

The quote at the top of the page is from Amelia Mott Gummere’s preface to an edition of Woolman’s works, published in America in 1922.

It includes a nice local detail. The owner of Almery Garth – Malcolm Spence, great-great grandson of Thomas Priestman – still had in the house documents written by John Woolman, kept there since 1772. In the early 20th century Malcolm Spence took photographs of them for the editor of the book, and later shipped all the documents over, just before he died.

The title of this page is from the same book, p138, a comment attributed to John Woolman as he headed towards York. It may be that he didn’t actually say it, but I’m overlooking that. It is home to his mortal remains, as he didn’t make it back home to America.

If you use material from this page, credit www.yorkstories.co.uk and link to this page. I’m sad that I have to say this, but I do. This carefully compiled research is offered on the web for free because I want people who don’t know about John Woolman to know about him, and his connection to York. Please respect other people’s work online, credit it and link to it. That’s how the web used to be, and how it should be. Thank you.

By Lisa @YorkStories • 22 December 2012 Histories, Memorials To link to this page's proper location please use the > permalink.