Thoughts on, views from, the green belt

The Local Plan … concreting over the green belt, erecting hundreds of wind farms as far as the eye can see and putting travellers’ sites in all the remaining bits.

I’m still trying to work it out and find my way through the information/misinformation.

The Local Plan is massive and complex, and just thinking about it may bring on fatigue and a sense of quiet desperation, so let’s calm and reinvigorate ourselves before contemplating it by focussing our eyes on something green. And brown. A bit of open land, green field/green belt between Rufforth and Knapton. Pictured in springtime a few years ago.

An earlier page discussed ‘brownfield’ land, and how the word makes it sound all dead and rubbish. Whereas ‘green belt’ is an appealing and emotive term, evoking a sense of the last vestiges of ye olde countryside preserved. Our modern-day walls maybe, protecting us not from enemy invaders as our old stone defences did but from ‘urban sprawl’, from being joined to Leeds, or worse, Copmanthorpe.

For some months now I’ve been thinking about the ‘green belt’, trying to think of it in terms of specific bits of land, instead of in that rather vague way I’ve always thought of it before.

I thought of the open land to the right of Wigginton Road as you approach the city. I don’t value it for any picturesque qualities it has in itself, but because it creates a gap, which means that just for a moment, as you’re travelling along Wigginton Road, you see the Minster rising up on the horizon from behind the roadside hedge and framed by far-off trees. Like our medieval ancestors might have seen it. But I think the land there is part of Bootham Stray, so is presumably protected from development anyway.

I don’t have a photo of that view, so here’s a similar view from Bad Bargain Lane (the far-flung track-like part of it). 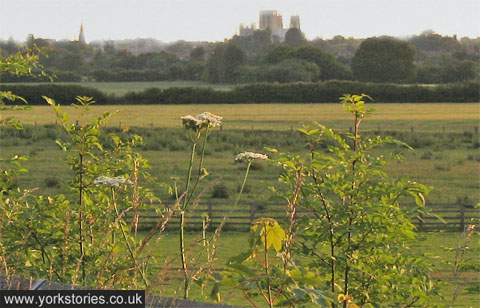 There’s pressure to find space for housing, and the Local Plan suggests some green belt areas which may be used. And of course, that isn’t popular. It’s not the whole green belt most campaigners are worried about, it’s particular bits of it. Maybe the bit their homes overlook or the bit they walk their dogs on at the moment or where they go to get some greenery and quiet. Understandable that residents would be upset at the thought of losing a place they value or a view they value.

But then all our homes spoiled someone else’s view, ‘concreted over’ a place previous citizens enjoyed as a green place. And surely no one who bought a 20th century built house on the edge of York expected that they would have a view of green fields forever, and that this was their entitlement? That somehow their street or area was the last phase in the city’s expansion?

Another view from the track leading to Bad Bargain Lane, on an evening in April, some years ago. (Can be enlarged.) Perhaps this idyllic scene has already been built on since. I must cycle out there sometime to have a look.

Those campaigning to protect the green belt often state that we should ‘build on the brownfield sites instead’. What they mean, I think, is ‘build it all somewhere else and not near me’.

Though the larger sites (Nestlé South, British Sugar, Terry’s, York Central) still haven’t been built on, there’s been so much new housing development in recent years on the smaller ‘brownfield’ sites that it’s hard to keep up. Off the top of my head, just near my part of town: on Heworth Green; near Haxby Road school; on Shipton St School; on the Groves WMC site; on the Abbots Mews hotel site; on Clifton Garage site.

Then there are the massive blocks built as student housing on Lawrence Street, off Walmgate, on Carmelite Street. The flats on the Hungate site. And so on.

All that building affects those nearby, and many of us living near these sites have lost our views, our open spaces, have seen towering tall things changing the horizon. But it’s what happens. Always has, always will. 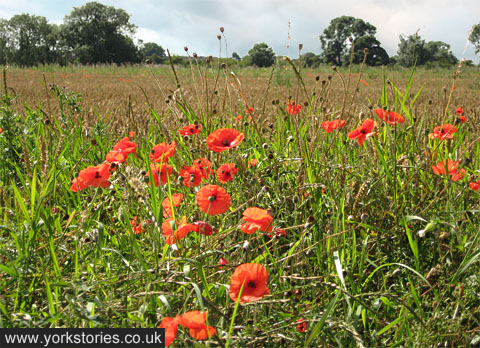 Looking back, rather than forwards, I’m sure the cowkeepers of Clifton weren’t happy when the fields around here were covered with terraced housing in the late 19th century. But I’m rather glad that happened as otherwise I wouldn’t be sitting here in one of them typing this, and would have nowhere to plug in the laptop. If you’re in a late 20th century home at the edge of the built-up area then your house spoiled someone else’s ‘green belt’/green field view within living memory.

Those brownfield developments, as I’m sure we’ve all noticed, are often apartments, tall blocks, making the most of the available land in prime locations by building as tall as possible. They’re a far cry from those 1920s and 1930s semis out in Acomb and Burnholme and well, everywhere, with gardens front and back. Looks like we might need some more open land to build some new houses like that? Do the people who already live in nice houses out in Skelton etc not think other people deserve a house with a bit of space around it?

So many small apartments have been built in the last decade or so that I think planners must have forecasted that the majority of the population would be divorced, or young and childless, or a student. Some couples, despite the austerity and misery, have managed to stay together, and some even managed to make children, and they perhaps don’t all want to cram into small city centre apartments.

Just a few thoughts from a non-expert, just observing it all and trying to make sense of it. Comments welcome below. Facts are particularly welcome. I’m finding it difficult to split fact from fiction and spin and propaganda, and I’m sure I’m not alone. 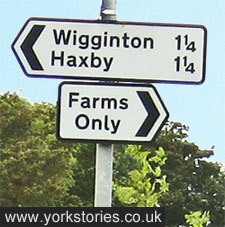 I’ll leave you with this roadsign on a narrow lane near York, where an even narrower lane apparently leads to ‘Farms only’. It isn’t only housing development threatening the green belt. If we believe the more inflammatory comments made recently on the Local Plan, this could soon read ‘Wind Farms Only’.

Local Plan consultation, on the City of York Council website

Lisa @YorkStories is the creator, administrator, and writer of content on www.yorkstories.co.uk. She can be contacted on this link or via Twitter, @YorkStories
View all posts by Lisa @YorkStories →
Tagged  brownfield, green belt, Local Plan
To link to this page's proper location please use the > permalink