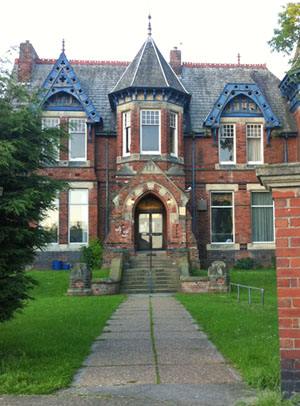 So, the demolition of Burnholme was approved yesterday at the Area Planning Sub-Committee.

I’m calling it Burnholme as that’s what it was called when it was built. Burnholme is now an area, a housing estate, on the grounds of this house. This building is now known as Burnholme Social Club, used to be Burnholme WMC, but it wasn’t built as a club: it was built as a house. And we, in the 21st century, should have had the wit and expertise to turn it back into residential accommodation.

But the plans were submitted to demolish it and the Planning Sub-Committee approved them. Some councillors present (or was it just one) spoke up for the building, thank you Cllr Brian Watson.

I’m not massively familiar with the complexities of the vast machine that is City of York Council: I just do my best to understand what’s going on and to connect on things that matter.

And this did matter, and many people think so, but the caring happened way too late in the day.

Not for the first time.

If it had happened earlier, would it have made any difference? Comments I’ve seen online and received privately suggest not.

I’m wondering how things can be improved in the future, because it’s really quite depressing to see such a short-sighted — and to many of us indefensible — decision made.

When I saw that the frontage of the Banana Warehouse was to be retained in the recently submitted plans for redevelopment in Piccadilly I thought this was maybe a sign that the ‘Local List’ had some weight at last. But clearly not. I also thought that in a city now so ‘gentrified’ a fancy old building like Burnholme would be valued — it could be turned into a desirable residence. But apparently not.

When passing the building years back, when this website started, I was surprised that its remaining grounds hadn’t yet been built on, that it had survived as it is. I can’t have been the only one. Perhaps it should have been realised earlier that this building was under threat and had no protection, and that someone would want it for housing.

Maybe the remaining land around it could have been developed with new housing, with this building refurbished? Apparently not.

After a quiet spell caused by the economic situation, this ‘building on the brownfield’ has taken off again with renewed momentum here in York. This seems to be the only option as there’s been so much opposition to building on the green belt. Which, in many areas, is nondescript land most of us couldn’t even identify, let alone sing the praises of. Those defending it say ‘once it’s built on it’s lost forever’ — which isn’t true. Lost in what way? Nature reclaims things if allowed to do so. (Go to Wharram and other deserted sites. Or look at our more recent brownfield sites.) But as clever as she is she can’t rebuild a Victorian fantasy villa. The craftsmen and builders of the time did that. And no one will do so again. And this is a particularly impressive example of their work. And this is what’s going to be lost forever.

The current ‘build build build and sod the consequences’ attitude doesn’t look like ‘progress’ and ‘growth’ to me: it reminds me of what I’ve seen and read of the post-WW2 period, when York destroyed many buildings we would now fight to save. It’s not progress at all, this decision. It’s like the 60s, and not in good way.

We can’t blame the club and its members. I don’t really want to ‘blame’ anyone. It just looks like a massive cock-up all round.

Lisa @YorkStories is the creator, administrator, and writer of content on www.yorkstories.co.uk. She can be contacted on this link or via Twitter, @YorkStories
View all posts by Lisa @YorkStories →
Tagged  Burnholme WMC, demolition
To link to this page's proper location please use the > permalink