Knapton and the Local Plan

21 June. The summer solstice. Standing by a field gate, at around 9pm. 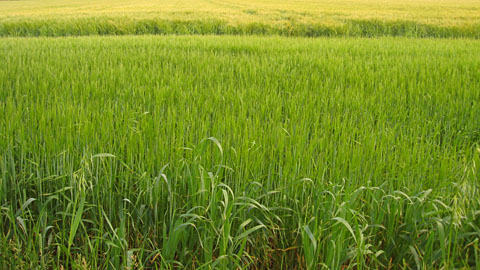 Just one field. One bit of one field. Greenfield/green belt land. At Knapton.

I’d been out on my bike up Acomb way and it being the longest day, with some daylight left, I thought I’d visit Knapton, a place I knew well in the 1970s and early 80s. I’ve cycled through here only a couple of times since, during the day, rushing, on my way to somewhere. Which is an entirely different thing to approaching slowly and stopping and having a proper look. I thought I’d do that, partly for nostalgic reasons, partly because the Local Plan has focussed my attention here.

I thought it would be ruined, so many places are if you go back after thirty-odd years with childhood memories in your mind. But from Acomb it’s just the same. You turn off Beckfield Lane, go up Knapton Lane, nice houses, tree-lined verges — an extension of Acomb’s apparently ever-increasing girth — and then the houses stop, and there’s open land. Just a field, either side of the road, separated from the road by a path and a bit of verge and a low hedge. On the left there’s a tree in the hedge, by a gate. Where I took the photo above.

It was possibly because it was evening, and quiet, with no one else around, but it’s a rare thing to feel such a sudden change of atmosphere, quite a profound change. When discussing it with a friend later I wondered if it could be something measurable like a drop in the temperature as soon as you’re away from buildings. All I know is that I felt, within a few metres of the end of the Knapton Lane houses, like I was in a completely different environment.

I’ve just been reminded that it’s called Ten Thorn Lane on the maps. But for us it was all just Knapton Lane: it went to Knapton.

Perhaps at one time it had ten thorny shrubs. Maybe the hedges at the edges of the fields here were first marked out by ten hawthorn saplings, long long ago, before anyone can remember.

I remember that we used to come up here for walks and look in the hedges for birds’ nests. Or came up here to cycle round on our bikes, somewhere quiet, safe, but away from our suburban streets. Also I think we were brought here when very young by our parents, when they fancied a stroll and wanted to see a field rather than someone else’s house across the road.

Maybe all those things made me stop at the field gate and think what a special place it is. Maybe other people wouldn’t have any of that, and would just see it as a boring field.

And it is just one field, before the houses begin again, of Knapton itself.
But before them, not far from the field gate, this sign. 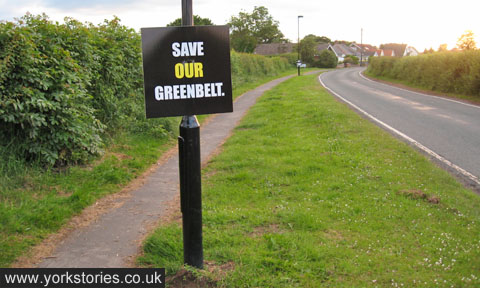 And a little further along, this sign. The photo isn’t that clear – it says ‘SAY NO TO TRAVELLERS SITE AT KNAPTON’ and ‘please contact the York Council Planning Office’. 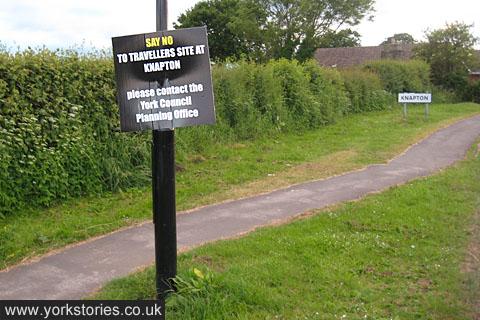 After passing a few bungalows, there’s a junction. Old Knapton is here. A tiny place.

We’re turning left and going down the marvellously named ‘Bland Lane’. This could be named after someone with the name Bland, or it could be a good example of ‘say it as you see it’. There’s nothing much of obvious interest on Bland Lane, and as I recall there never was. After a while you reach the Wetherby Road.

At the junction, more signs. 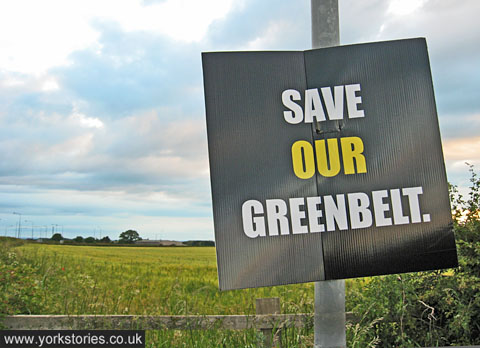 It’s only another field, between here and the outer ring road (A1237). On this field a showpeople’s site could be built. It’s in the Local Plan as a possibility. There’s more information in the links at the bottom of the page.

There were two roads we used to cycle along from that small crossroads at Knapton village. They both ended at Wetherby Road. The other has been truncated by the ring road cutting across it, so I didn’t bother exploring that one, but headed back to the main street of Knapton as the sun was sinking low.

This is really the only ‘facility’ tiny Knapton has. The Red Lion pub. 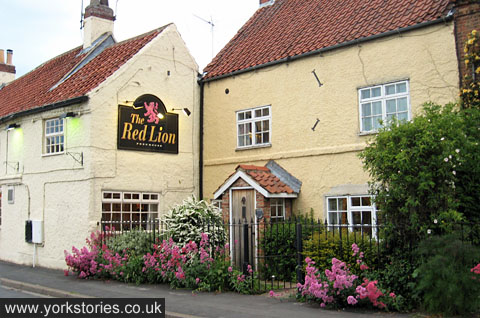 Nice to see it’s still a pub. Alongside it an attractive house with flowers spilling out from the railings. And opposite and adjacent some more nice old properties, including one with an atmospherically overshadowed entrance, obscured by greenery. And a few newer ones built around the back since I was last up here. 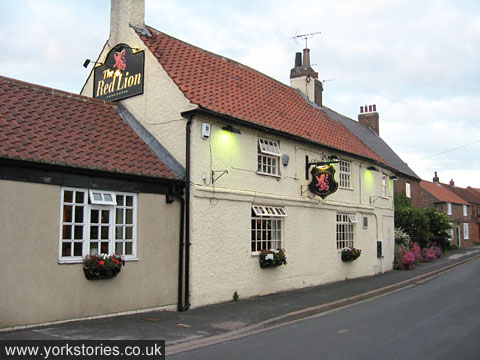 Off the main street, from the crossroads we just passed, is ‘Back Lane’, which, as its name suggests, just runs round in a small semi-circle behind the Red Lion and a few other properties before ending up again on this short main street.

And it is very short, and suddenly you’re at the end of the buildings, and there’s a brick-built pinfold, which I don’t recall ever noticing before. Perhaps it was covered in ivy back then. Or perhaps I was too young to recognise a pinfold or care about it if I did.

And then it’s not long before you meet the ring road. I’ve approached this bit from the other side but it still disorientates me. You need to cycle along it for a few metres before you meet the other bit of what used to be the road to Poppleton. Me and my mum, me and my sister, used to leave Beckfield Lane up Knapton Lane and cycle to Poppleton on minor country roads. The reason I mention that is because I want to stress how much Knapton has had to accommodate change already. The outer ring road skirts it so closely it’s remarkable it has managed to still seem rural — at least on the summer evening when I passed by.

Across the ring road it’s a different thing altogether. The cut-off section of road between the outer ring road and the A59 — what used to be the continuation of the road from Knapton — is strangely grim and depressing and not as I remember it at all. It’s not a through route anymore, it’s a bit of road with a small industrial estate or ‘business park’ on it. It’s as if it’s not the same road. I just wanted to get out of there as soon as I could.

I emerged near what used to be Challis’s, and is still a garden centre, with a Park & Ride site forming opposite, and Poppleton across the way. I turned right and cycled home, thinking about how tiny Knapton is. How it’s survived the ring road being built so close, how it needs looking after and protecting. That the place has managed to stay special, and I don’t know how it’s managed that, but it has.

I’m not sure if it can also cope with a concreted yard filling a large part of the green area separating it from the ring road.

Political and personal agendas obscure the facts in this debate and in all of them, and it can be time-consuming trying to get to the reliable and objective information. I’ve made an effort to read up on Knapton, and on the Local Plan background documents regarding these controversial sites, and on the gypsy, traveller and showpeople’s communities and traditions. The links below are to documents and websites I found most interesting and illuminating. Please feel free to add further suggestions via the comments.

Google Map to accompany this page

On the Local Plan:

Not an alluring title, but everyone should read it. It’s more interesting than it sounds. The main CoYC document relating not just to the proposed site at Knapton but to other proposed sites. It explained some aspects I was totally ignorant about. It certainly demolishes the notion which seems to be circulating that the local authority is just randomly shoving in travellers’ pitches.

More on gypsy and traveller communities and showmen: