Audrey was born and brought up in York. Her dad was a mechanic at Forsselius’s garage, and later had his own garage at Clifton. 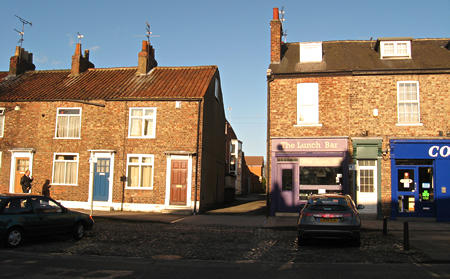 Photo: Once the entrance to Barker’s Yard and Kitch’s garage, Clifton

“In later years dad branched out for himself into his own garage where many customers came to him. Especially taxi drivers.

I think most people knew dad – ‘Kitch’ as he was affectionately known. He had worked for all his working life at Forsselius in Blossom street (we lived over the one with the tower and clock) then after the war he went on his own and went into the Clifton garage, a wooden structure I think that had belonged to Mr. Flower a taxi cab owner. Attached was Horsleys the joiner, another wooden building. Years later the garage caught fire and it was rebuilt in brick. It would hold 2 cars at one time. Dad stayed there until he retired.

It was up Barkers Yard, just near the road crossing and the wet fish shop.

The local policemen would warm themselves at his stove. Taxi drivers came as he charged less and was willing to go out if they broke down. He bought an old Terrys van and drove that round for his supplies etc. My mum would go off for spare parts for him to the bigger garages and walk down Clifton with them under her arm.

They were living up the little dead end street Skelton Street which has I believe been demolished. There was a little shop selling small food and sweets etc on the right hand corner of Skelton Street. Most people had lived there for years. They were all moved when the street was demolished I believe.

My mother was a well known figure around the Green, she and dad went into The Grey Mare for a late night drink when dad left work after his long day. They would stand together near the area at the back side of the serving area. He wouldn’t sit down in the little cubicle area as he didn’t want to dirty the seat.

He worked long hours and many York taxi drivers will remember his kindness in turning out to repair vehicles in the middle of the night!”

I asked Audrey where her dad’s nickname came from. It wasn’t a shortening of his surname. During his schooldays, and in his first job, his friends used to call him ‘young Kitch’ – a reference to Lord Kitchener. Kitchener was Secretary of State for War, and is best known in connection with the iconic ‘Your Country Needs You’ recruitment poster. ‘Young Kitch’ was around 12 years of age at the start of the First World War. Too young to sign up, but his nickname suggests he was a keen young recruiter and would have signed up immediately had he been old enough.