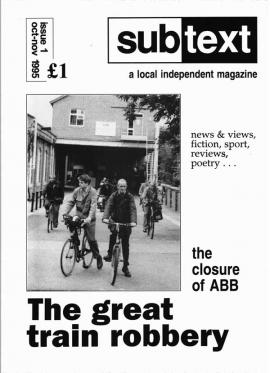 Subtext, a York-based magazine, appeared in the mid-1990s, at the tail-end of a Tory government. The National Lottery had been running for about a year. York’s ABB carriage works was about to close. Protests were taking place over the proposed redevelopment of the old hospital sites at Naburn and Clifton. The Bonding Warehouse was still a popular venue, rather than a boarded-up empty building. The internet was a mysterious and generally unknown thing. York City FC had just been to Old Trafford and celebrated a 3-0 victory over Manchester United in the Coca-Cola Cup.

Subtext was ‘a local independent magazine’, edited by the ‘Media Mogirls’, published bi-monthly for just over a year – seven issues in total. It sold for £1 a copy and was available from a number of local stockists, and by postal subscription.

Its pages covered a wide range of subjects, including articles on politics, gardening, football, music, history, opinion pieces, creative writing. Poetry was a regular feature, in the ’subversive’ section. 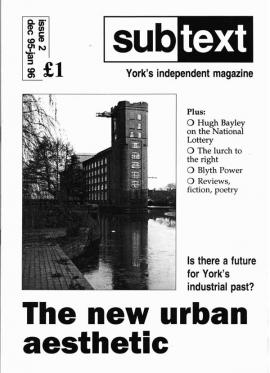 The rather hesitant subtitle of ‘a local independent magazine’ was replaced by the more confident ‘York’s independent magazine’ on the front of the second issue. Issue 2 included an article on arts funding and the National Lottery, by Hugh Bayley, who was pictured reading a copy of issue 1. Adam Menuge’s article, featured on the cover, was ahead of its time in appreciating York’s industrial heritage. 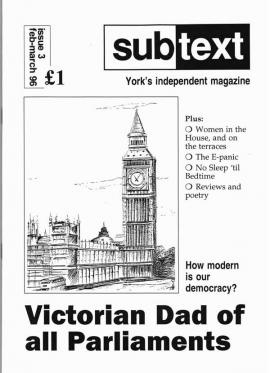 Advances in desktop publishing technology meant it was much easier to produce page layouts and advertising leaflets on a computer screen, which were then printed out as camera-ready copy. It was easier, but still expensive, and not immediately accessible. Buying the necessary laser printer meant a trip to Leeds to find a particular model of an HP Laserjet, which cost £600.

Copies of the first Subtext were produced on a hired photocopier, and every copy was folded and stapled together individually. Later issues were produced more conventionally, by local printers. 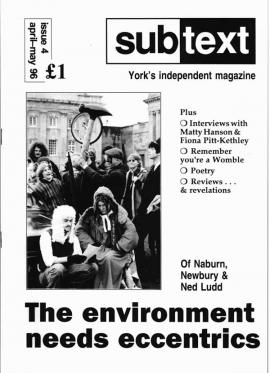 Several editions of Subtext highlighted local environmental protests, particularly those at the Clifton and Naburn Hospital sites. (One is now Clifton Park, the other the Designer Outlet.)

Issue 4 featured recent protests in its cover photo, included updates on Naburn and the out-of-town shopping debate, and reported on a ‘trial’ of the car, presented by the New Luddites, which had taken place at Clifford’s Tower. The ‘Acomb Womble’ reported on litter-picking efforts also intended to support the local environment. 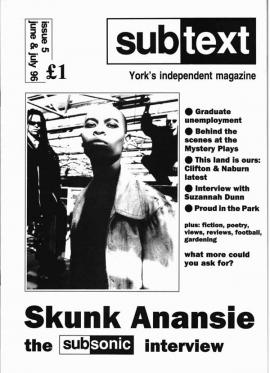 The magazine’s music section – ’subsonic’ – included news of local bands and gigs, and interviews by Virginia Fox, who brought to its pages more widely recognised names: Chumbawumba, Kula Shaker, Credit to the Nation, and Skunk Anansie, pictured on the cover of issue 5.

Films were reviewed by James Drew, and book reviews featured in the ’sublibrarian’ section. The magazine also included interviews with Suzannah Dunn and Fiona Pitt-Kethley, by David Kendall, another regular contributor.

Proud in the Park celebrated its third year in 1996. Dhara Thompson’s article in issue 5 highlighted that year’s Rowntree Park event, and mentioned a ‘raunchy tombola’, ‘fairground rides … and a gay socialist transvestite poet … all in the same place. Could York have ever seen anything like it?’ 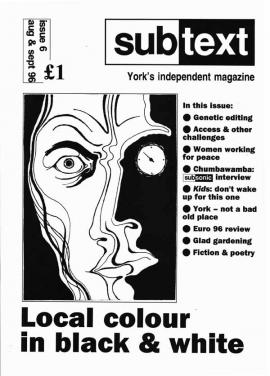 In issue 6 Lin Wilson wrote about the ethics of genetic research. Patrick Nuttgens contributed his thoughts on living with disability and the challenges of accessing York’s historic buildings.

‘Leaks from the think-tank’ appeared in this issue and others: ‘an occasional column about a hidden agenda, somewhere’ by regular contributor Roy Stevens.

The cover illustration was by Tony Bage, who supplied many illustrations for Subtext. Phil Singleton took most of the photos featured in the magazine.

None of the contributors were paid. Neither were the editors. 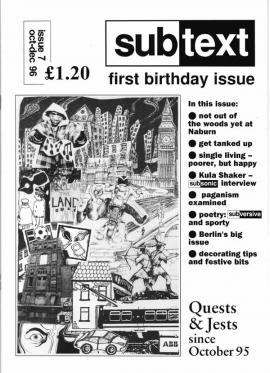 The magazine, like so many, didn’t last. Circumstances changed, people moved on, an illness intervened, and the money ran out.

It wasn’t financially viable, despite the support of paying subscribers. Such ventures, however well-meant, however well-supported by a small number of people, rarely continue for long. The fact that they don’t continue is sometimes seen as a failure. But better to have seven issues of a magazine than none at all. Particularly when those pages capture a time and the talents of that time, and the happenings of that time, as Subtext magazine did, thanks to its many contributors.

A few days ago, fighting my way down a tourist-filled Petergate on my way to Barnitts, I remembered something written back in 1996 for Subtext magazine, when the effects of tourism were just beginning to be felt, and someone called ‘Old Yorkie Lisa’ was trying to adjust to this change of focus.

If you contributed to Subtext, or remember it, it would be good to hear from you.