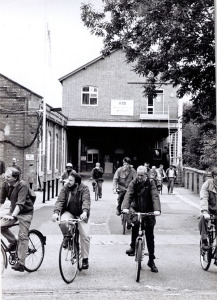 Almost 20 years after it happened, a reminder of what the closure of York’s carriageworks meant. Below is a selection of snippets, news reports, reaction and background, recorded from the radio in May 1995 when the closure was announced. Many voices. Please do have a listen, particularly if you don’t know about this important aspect of York’s history. If you haven’t time to listen to them all (though all are quite short), maybe listen to the first and the last.

‘ABB’s Holgate Road factory is the biggest train builder in Britain and one of the most modern in the world’.

The Managing Editor of the Evening Press talks to Barry Parker, Radio York, about the closure, the newspaper’s campaign, and its supplement celebrating the carriageworks (2 mins 35 secs):

Mabel, a caller to Jonathan Cowap’s programme, Radio York, morning of 12 May 1995. Mabel and Jonathan discuss the impact of the closure, and their sadness
(56 secs):

Pat, a caller to Jonathan Cowap’s programme, 12 May 1995. Pat lives near the carriageworks, her call conveys the way this factory was at the heart of the community
(2 mins 36 secs):

The piece that sticks in my mind the most is this from Mike Briscoe, north of England transport correspondent, on BBC Radio 5 Live, a few days after the closure announcement. I thought it was such a brilliant and poignant piece I spent a long time typing up his words at the time. Now retrieved and turned into a PDF, so you can read it as well. But I recommend a listen. He conveyed so well, in measured words beautifully delivered, the feelings many of us had at that time. He highlighted the ‘hiatus’ that had led to the closure.

Transcript of the above (PDF)

I have a full C90 audio cassette from which these extracts were taken. I recorded it on one of those bulky radio cassette recorders, in a flat on Bootham where I was living at the time. The cassette is one of many I made a digital copy of earlier this year. I haven’t asked for permission from the BBC to include these extracts but I trust no one objects.