I keep tweeting about film clips discovered online, but as not everyone is on Twitter, time to mention a couple of favourites, in addition to those previously highlighted, like the brilliant film of bikers riding through York and its suburbs, in the 1960s.

Fast-forwarding to present day York, for a faster journey, by Brodie Craven. Many hours condensed into around four and a half minutes. Watch this with the accompanying soundtrack. It’s stunning. ‘The idea was to tour as many of the sights of the City of York (UK) in the 16 hours between sunrise and sunset.’ 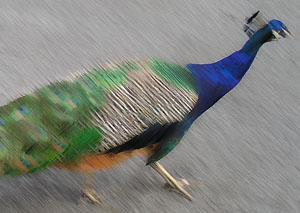 And back to the 1960s again, from the wonderful Yorkshire Film Archive comes York the Eternal City (1960). No sound, but a nice personal representation of ‘ordinary’ York, by amateur filmmaker Fred Brackenbury.

The film includes the peacocks which were such a familiar sight in the Museum Gardens, and shows King’s Square, and York Market in Parliament Street, with shoppers looking for bargains. There’s also a lovely shot of a barge being unloaded, reminding us that the Ouse was used for transporting goods until fairly recently.

At 7 mins 34 seconds is a view since lost – the tower of St Maurice’s church on Monkgate looming behind the city walls. The church was demolished in 1966.

And there’s even some footage of a ‘religious play’, performed on a waggon, near the west end of the Minster (near the end, 14 mins 45 secs).

The peacocks may have gone, as have one or two churches, but the waggon plays remain.