This is how Councillor P B Curran described York in 1971:

… Empty and derelict property, scattered like running sores all over the city, acres of sterilised valuable land crying out for development, solid jams of traffic locked right in the very historic core. Members of the council making pathetic excuses to explain it all away.

It doesn’t sound good, does it. While I was playing with empty cardboard boxes and counting the candles we had for the power cuts – or whatever it was that we small children did in the early 70s for entertainment – the powers that be were debating the construction of a new, big, inner ring road – a ‘tarmac necklace’ as it was dubbed at the time. This was seen as a solution to some of the city’s traffic problems. In preparation for it, areas were cleared, including the land we now use as Union Terrace and Marygate car parks.

The new road would link them, taking out a fair number of houses and a hefty section of green space.

It was seen as the best solution to the growing traffic problems. York was besieged – not for the first time in its history – but this time by a constant onslaught of cars and lorries and vans.

The plan was for the massive road to cut through the car park on Marygate and head up towards Bootham, taking out the left hand side of the street called St Mary’s on the way. 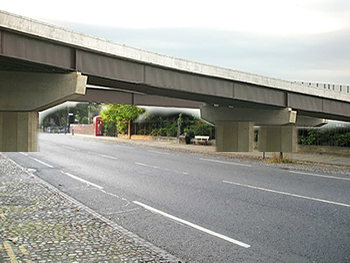 A cack-handed ‘artists impression’ of the horrors we escaped. Technically I think this part of the road was going to cross Bootham at ground level, not on a big flyover, but having already gone to all the trouble of messing around in Photoshop, I wasn’t going to start all over again …

It would then pass over Bootham (as in this ‘artist’s impression’), through what must have been seen as a handy ‘gap’ – Bootham Park Hospital grounds and Bootham School playing fields – where it would be ‘screened by trees’ (making it almost invisible, obviously). A horrible vision, isn’t it. 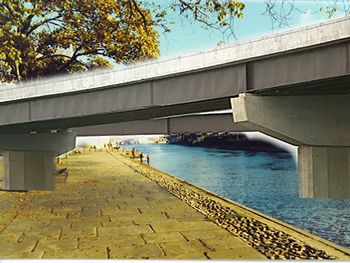 Back at Marygate, the ring road was to be carried on a bridge just alongside the present Scarborough Bridge, but a bit higher, thereby replacing the beautiful river view from Scarborough Bridge towards Lendal Bridge with, err, concrete (as in my ‘artists impression’). Then the road would swing round behind the station (see map, below).

As it continued on its concrete way, St Paul’s Church on Holgate would be demolished, and there would be a couple of hefty great roundabouts, one in the middle of the Mount.

This wasn’t just an idea, it was going to happen. Most of the debate seemed to be about which historic buildings could be done away with and which views could be ruined without people feeling too bad about it. Vast amounts were spent on consultations, compulsory purchase orders were sent out to householders and businesses whose properties were in the way, and an inner ring road plan was approved by councillors.

Pesky intellectuals save the day

Douglas Craig – better known in recent years as a Chairman of York City Football Club – was one of the councillors in favour of the ring road scheme. Thirty years later he cemented his popularity by putting the football ground up for sale. But back in the 1970s he was Chairman of the City Council’s traffic committee, and is often quoted as the wrangles over the ring road continued.

He had sympathy for those whose property was in the direct line of the proposed road. But he didn’t have much time for the growing group of protestors against it, who were, he thought, ‘mainly led by people from or on the fringe of the university who are usually described, loosely but never in my opinion accurately, as intellectuals.’ (Yorkshire Evening Press, 26 Oct 1971) (Dear Dougie, how I miss your bonhomie.)

The ring road plan was shelved indefinitely after a public enquiry, following an outcry from citizens and many conservation groups, and skilful campaigning by the pressure group York 2000 (many of whom were perhaps those pesky ‘intellectuals’).

Still, the debating and wrangling about the proposed road went on for years, as my pile of newspaper cuttings attests.