The inner ring road plan seems to have come from sheer desperation at the amount of traffic in the historic core of York, a problem which didn’t go away. The issue dragged on for years, tediously. Councillors debated whether to protect the proposed line of the ring road. It was protected for some time, leading to planning ‘blight’ and uncertainty.

It got more complicated still when changes in local authority structuring meant the county council were also involved. The Yorkshire Evening Press reported a meeting in August 1975: ‘Then came an emotional speech from Coun. Mrs Betty Doig who, thumping the wooden benches to emphasise her point, slated the county council for “mishandling and mismanaging” the situation. She declared herself absolutely and thoroughly sick of it.’ (YEP 5 Aug 1975)

I appreciate how the lady felt, and I’ve only read a few of the reports of the apparently endless council meetings.

Eventually, of course, we realised that concrete ring roads close to historic city centres weren’t that great, and that an outer ring road at a decent distance from the city walls might be preferable.

It seems important to pause, remember the 70s, and to thank those who worked so hard to fight the ring road plans. Some of them being those pesky intellectuals mentioned earlier. I often remember their efforts, when walking along Bootham past Bootham Park Hospital grounds, the lawns and the lines of the houses and the railway and the fine old trees that wouldn’t be there if the ring road plans had succeeded. 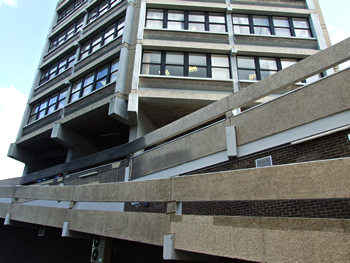 People complain about Stonebow House, as a mid-20th century blot on the landscape.

Perhaps instead we should look at it and feel relieved that York was relatively unscathed by the madly exuberant post-war modernising, and that the city has, if you like, only a concrete earring or two, rather than a whole concrete and tarmac necklace.