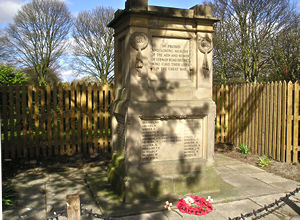 I’d not noticed before that there’s a First World War memorial here, on Salisbury Road, on the approach to Clifton Bridge. The inscription says: "In proud and loving memory of the men and women of Leeman Road district who gave their lives in the great war." 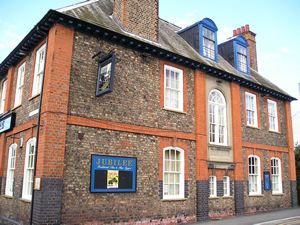 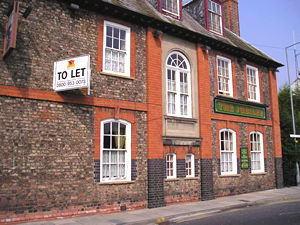 When I visited in April 2006 I was pleased to see the Jubilee pub in use, and looking smartened up – that blue paintwork is nice against the red brick (above left). On a previous brief wander this way, in August 2004, when I took the photo above right, the pub was To Let, and looking a bit scruffy. 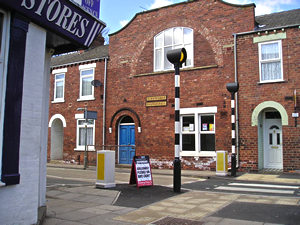 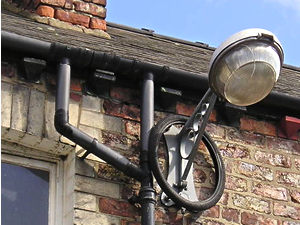 There’s a handy bench next to the shop here on Salisbury Terrace, so I sat about admiring the view and waiting for my companion to emerge from the shop with chocolate supplies. Opposite the shop, in the middle of the terrace of houses, is the rather sweet St Barnabas Church Hall building (above left). I also noticed, to my right, that someone had shown considerable skill in throwing an old bike tyre over the top of a light at gutter level on a nearby house (above right). 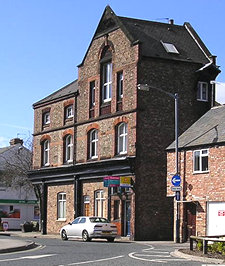 Leeman Apartments – originally a building owned by the Co-operative Society, before its conversion into flats. The old inscription says "Branch No. 3 opened by C. Longstaff, April 17th 1907." I know someone who used to live here, and though I’m no architect, when I visited (years ago – 1990s I guess) it seemed like a very successful conversion to me – a good example of the reuse of an older building. 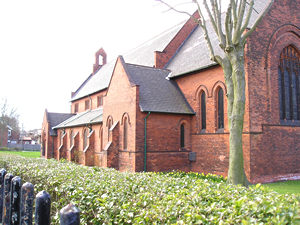 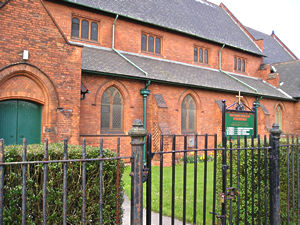 Above – St Barnabas Church, Jubilee Terrace. A modern red-brick church, built 1902-4 (architects Hornsey and Monkman). It is in a nice setting, and was at the edge of the built-up area with the grassed area next the river alongside it. Part of the grassed area has recently been used for the site of the new St Barnabas School (see below). 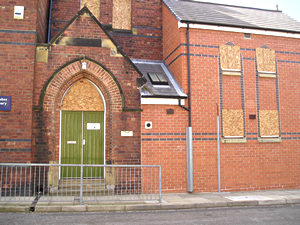 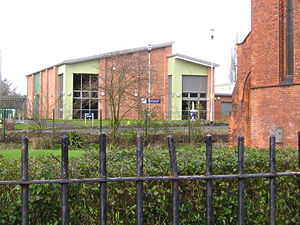 The demolition of old buildings and the erection of new ones is always controversial. People miss the old buildings and someone is always affected by the building of new ones. The old St Barnabas school (above left) has been reprieved from demolition – for more see the page on St Barnabas School. The construction of its modern replacement (above right) caused concern locally, as it obviously necessitated taking some of the riverside land previously used as public green space.

Observing, from my wandering

I enjoyed my wander through these streets and came away from it with the sense that this is a cohesive community clustered around some important local landmark buildings. I hadn’t really appreciated them until I went to look at the old St Barnabas School. Accompanying the school is the church of St Barnabas, and its church hall, the three of them fairly close together, with the terraced houses between, in lots of intersecting streets. At the back of the houses is a large green space by the river, and in the area backing onto the Clifton Bridge road there’s a play area which was busy with young people when I visited.

There’s also, of course, the pub, and the shop – still on the corner, like they used to be before we invented warehouse-like ones out on the ring road.

Alongside the older Victorian terraced housing is a newer small estate, which I didn’t photograph, but which looked really well laid-out – houses with gardens, nicely planted with trees and shrubs and with some variation in levels, certainly nicer than a lot of modern developments around these parts.