From pubco to Tesco? The Punch Bowl 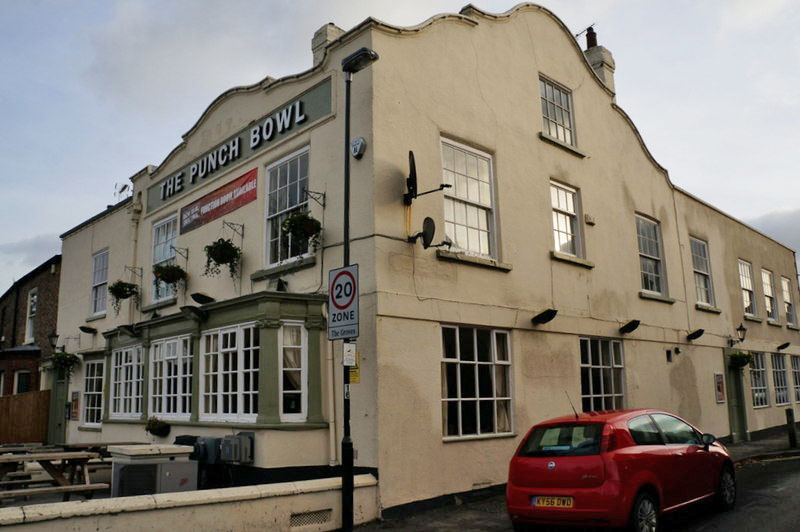 Recent stories in the Press highlight concerns that the Punch Bowl pub at the end of Lowther Street may become another Tesco ‘Express’ store. When I first read about this it sounded daft and unlikely, for several reasons. But it seems it has been seen as a genuine possibility, as speakers at a recent council meeting raised the issue and asked for the council’s assistance in protecting the pub.

There are three speakers, who each speak for 3 minutes, and it’s really worth 9 minutes of your time. The first speaker is a customer, Paul Gillier. He’s followed by Paul Crossman, landlord of The Swan pub in Clementhorpe, and Nick Love from York CAMRA, who both speak on the background and wider context. The issue affects many pubs, not just this one. (I’m hearing a lot of references to the ‘pubco’ – pub companies owning a lot of pubs and perhaps wanting to sell these assets.)

The relevant documents are on the council’s website on this link (item 10), with the specific ‘Article 4′ related document on this link (PDF).

I walk past this pub often, either heading down Clarence St past the front of it, or down Lowther Street which goes down the side of it. Here’s the Google Street View, from the perspective of a driver turning into this end of Lowther St. (If the Street View doesn’t show, try the ‘Larger map’ link, it should show up then.)

This is a very busy junction, at certain times of the day. I know this because I often come home this way and know how long it takes to cross the road. It’s also one of those rather stressful junctions for everyone waiting at it, as four roads meet here, which makes it more complicated. Clarence Street here meets Wigginton Road forking to the left and Haxby Road to the right, and also to the right Lowther Street, all controlled by traffic lights.

Lowther Street is very narrow at this end. It’s perhaps not obvious from this photo just how narrow this part of the road is. As a pedestrian I’ve often been aware of it. This view above makes it clear why that is, because the house on the other side of the street appears to have a strange boundary which overlaps onto the normal pavement width. If you’re walking along here and someone else is walking along here towards you, one person has to step into the road. A narrow road, further narrowed by a car parking space.

How would that work, I wonder, if there was a massive increase in pedestrians coming and going, as there would be if a Tesco Express opened here. Imagine it at rush hour. And the delivery vehicles, coming via Lowther St? Imagine that.

Well, I can’t imagine it actually. It’s a ludicrous idea. I can’t believe it’s being put forward as a possibility.

I can’t find any record of a planning application associated with this, and I can’t see that there will ever be one, because I can see no way it would ever be passed on planning grounds, just based on its location and the access difficulties, for a start.

As in other cases, these situations where valued buildings and community assets are under threat at least make us take proper notice of things we otherwise tend to take for granted. So I’d like to note a couple of things of value about this pub. I’ve noticed them before, and it’s nice to have this opportunity to mention them.

I’d like to draw everyone’s attention to the fact that the Punch Bowl is actually a very attractive building. It looks good on that corner, doesn’t it. I thought it was perhaps an early 20th century build, but have just found one reference to a Punch Bowl Hotel on Lowther St, from 1899 apparently, so maybe it’s older than I thought. It seems to be on the 1909 map (via www.old-maps.co.uk). I haven’t time to research this but perhaps a reader has more information. Or perhaps Hugh Murray’s Directory of York Pubs has more information.

The pub doesn’t seem to be on any list of local heritage assets either, or in the recently published ‘Character Area’ documents for the city, as far as I’m aware. Which seems very odd, considering that it’s quite a landmark on that corner. Again, if you know differently, please add a comment.

The Groves area behind it has lost two of its pubs in the last decade or so, on Penley’s Grove St running parallel to Lowther St. Both were modern buildings, presumably dating from the 50s or later when the flats were built, and weren’t architecturally attractive, though they did have community value as meeting places. (One, formerly The Reindeer, retains ‘community value’, as it was converted to a Londis store.)

The two remaining pubs, this one and the Castle Howard Ox a stone’s throw away, are both hanging on in there on the boundary of this busy residential area. When I say ‘hanging on in there’ it makes it sound like they’re struggling and dying. Not at all, is my impression. Both the Punch Bowl and the Castle Howard Ox seem popular and always seem to have customers, in the evenings and the afternoon.

What’s nice about the Punch Bowl is that it has a beer garden at the front, overlooking the busy junction. Not everyone’s idea of a beer garden, I guess, if you prefer peaceful and more garden-like beer gardens, but it seems very popular. And it adds something to this place, at the edge of the Groves, to have people visible, socialising, people-watching/traffic-watching. It adds something to the ‘ambience’ of the area too for the bored people sitting in traffic on the commute to and from work, as they have something more interesting to look at than yet another rather soulless mini-supermarket.

I also remember passing one summer evening and hearing loud live music emanating from upstairs. A local band rehearsing, presumably. The immediate neighbours might not have been so keen, but I was cheered up by it, and pleased to see (or rather, hear) that the pub was a proper community hub, with other things going on. We need these places to give heart to our communities.

Not the right place

So, I hope everyone who has any power over this will prevent any attempt by Tesco or indeed anyone else to turn this site into a supermarket, as it’s clearly a ridiculous idea.

I’m not a person who hates mini-supermarkets. I shop in them all the time. They’re obviously successful, but that success makes the area they’re in much busier, and that isn’t always an enhancement in already busy areas congested with traffic and with nowhere to park.

It’s clear though that Tesco are keen to get into the Clifton/Groves area. If this threat comes to nothing and you’re a fan of Tesco it looks like you’ll only need to cross that junction and head up the side of the hospital, over the railway line bridge, towards Burton Stone Lane … which is where we’re going next.