‘As usual this meeting of council is being filmed for live broadcast via the internet so that more people can get a chance to see the meeting live and feel involved in their local democracy.’

— said Lord Mayor Cllr Gillies at the start of last night’s council meeting. Certainly seems to be effective, judging by reaction on Twitter. We were feeling very involved indeed.

If you’d like to watch the meeting from the start, the first part is on this link. It’s split into sections, with others available on this link.

As someone once said, ‘everything is political’. Anyone who cares about the city, its present state and future plans, has to engage to some extent in Guildhall goings-on. It’s much easier to do that these days, as technology takes us into the heart of it all. Last night’s meeting of the council engaged many more people, and in the end it all went rather beautifully, in that it seemed to properly represent the finer and nobler parts of that thing we call democracy.

I just wanted to mention a couple of parts of what was a long and eventful meeting. Four speakers who spoke passionately. These excerpts have been carefully cued to start at the appropriate places – I hope it works. Please do have a watch/listen. 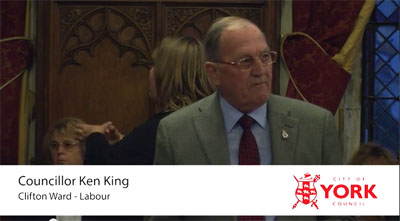 At the start of proceedings two councillors in my own ward of Clifton made speeches widely reported in the media today. I’ve been waiting for the video to be uploaded, as I think this is one of those times when we need to see and hear them speak, not just read their words, to get the proper picture. They’re introduced by Lord Mayor Ian Gillies.

They’re followed by council leader James Alexander, who during other parts of this long meeting came across very well — he’s an excellent speaker on things he really cares about — but here … well, judge for yourself.

I don’t communicate much with my local councillors, and it’s a while since I’ve had any contact with Cllrs Scott and King. It was good to see them speak so honestly. Like many Labour voters in this city I had serious concerns about the current administration here in York and felt I couldn’t vote Labour in the council elections next year. But I can now vote for Cllrs Scott and King, as they clearly care about Clifton and its people, and that’s what matters.

[Update … December 2014 … not so sure now about voting … back to being a floating voter, floating between Labour or Independent Labour or Green. Still thinking about it.]

More on this from the Press 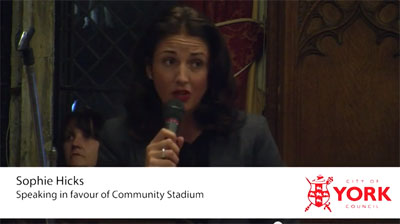 This was the main reason I tuned in to the webcast. That community stadium issue, with its long history, stretching back so many years.

I don’t want the football club to leave Clifton, to leave Bootham Crescent, but I know that it has to, and I know, because I was involved in the protests over a decade ago, how hard won it was, keeping hold of Bootham Crescent for this long. As emphasised here by Sophie Hicks.

She’s followed by Frank Ormston, who talks about the club’s history, to remind those listening why it deserves support in the crucial vote for funding for its future.

(If the image link doesn’t take you to the right bit of the proceedings, try this link, and go to 37 mins 31 secs.)

The vote last night was important to many people packed into the public gallery and watching on a screen in a nearby room, as well as to many of us watching the webcast and discussing it on Twitter.

Here for key vote on funding for #yorkstadium. Interest massive for #ycfcfans, this is the overflow room at Guildhall pic.twitter.com/seyK61txtJ

See The Press for more on the vote on the community stadium plans.

Also of interest, and featuring in this unusually eventful meeting, the future of the Burton Stone Community Centre, which may feature in a future page, and that very big issue of the Local Plan, and specifically how many houses and where we’re going to put them. More on those stories later perhaps.

City of York council meetings can be viewed live on www.york.gov.uk/webcasts or on the council’s YouTube channel later.

I wonder what other York residents feel when watching these full council meetings in the Guildhall. I find them always interesting, and in parts very moving. Inspiring even, in the ‘public participation’ section. Watching all those different people, often nervous, passionate, standing up to speak, in that ancient place, so much a part of York’s long history. So many people packed in, all ages, backgrounds.

The party-political bickering can be a bit tedious, and I rarely manage to watch a meeting all the way through, but overall I think it’s an excellent thing that technology enables so many of us to watch the workings of our local democracy.

Comments welcome, but anything personally abusive or vindictive or sweary will be removed, because this is my site, and we don’t like that kind of thing here. It’s not Twitter ;)

By Lisa @YorkStories • 10 October 2014 Council
Tagged  Guildhall, YCFC
To link to this page's proper location please use the > permalink