Oh Saint John Lewis, come and save us

Where to begin …
What a strange six months it has been, for anyone who cares about York and observes its endless changes. 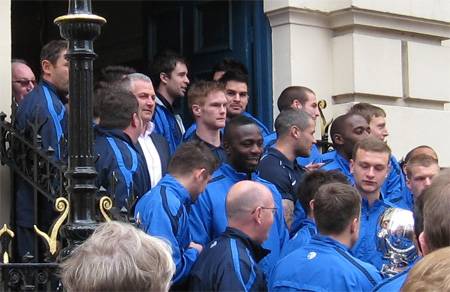 Let’s begin with this photo of our football team standing on the steps of York’s Mansion House, on Tuesday, with the FA Trophy, won last Saturday at Wembley. Hurrah.

It’s been an important week in the history of the football club. Not just the FA Trophy win, and another trip to Wembley on 20 May for the play-off final. The approval of the planning application to build a new stadium out at Monks Cross came on Thursday, after a long-winded process, much controversy, and a very long meeting to decide the issue.

The stadium will house not only the football club, but York City Knights rugby club. Stadiums don’t come cheap, of course, and so the development also includes an ‘enabling’ retail ‘offer’ – including a massive John Lewis store and a massive M&S store – all to be built out at the Monks Cross retail park near the ring road.

I’m not a fan of shopping in characterless places like Monks Cross, or indeed of shopping in general. I’m not a sports fan either. Therefore, basically, neutral. I’d prefer things to stay as they are. But it seems they can’t. So, a few thoughts on the recent decision, and the campaigning of the last six months or so, which I’ve been following with interest.

Back in November I went to a meeting held by the ‘Campaign for York’ group. Perhaps, as I have a website called York Stories, and have been going on about York for years via its pages, you’d expect me to go as a supporter of this campaign to ‘protect York city centre’. But I didn’t. The campaign leaflet made me angry. I went to the meeting to hear the arguments, not as a supporter.

It’s a long while since I’ve been to a campaign group meeting. This one wasn’t like any I’d been to before. Normally, in my experience, they’re in small rooms – community centres, church halls etc. This was in the Tempest Anderson Hall alongside the Yorkshire Museum – and with its access through that rather grand frontage. My immediate and abiding impression was that this was the ‘York Establishment’ speaking. I don’t know the kind of people who could hire Tempest Anderson Hall at short notice, or indeed with a lot of notice. At that point, the pro-stadium camp seemed the underdog.

Like many people, I was alienated by the name of the ‘anti’ group. It’s always dangerous to claim to be speaking for everyone. I didn’t feel they were speaking for me, or on behalf of ‘York’.

Sadly, from that meeting and continuing, it looked mainly like a 21st century version of the trade guilds of old – the same kind of protectionist basis. It looked only as if they wanted to safeguard their own interests and were fearful of ‘incomers’ taking their trade and upsetting the balance. Understandable, of course, but not particularly inspiring for many of us York residents, and not representative of the wider York I know. The wider York I know extends well beyond the city walls and includes people who have little stake in the increasingly gentrified city centre – particularly that historic core so much changed, so clearly for tourists.

The Campaign for York’s assertion that the city centre would ‘die’ because of the proposed developments out at Monks Cross appeared, and still appears, rather baffling. I wondered, were they looking properly at the thing they were so assiduously defending? Was their city centre the same one I was seeing? Comparisons were made to other cities that had suffered after large shopping centres were built on their outskirts. The comparisons were to places like Sheffield and Castleford. Don’t want to be rude, but – well, you know. I was offended on historic York’s behalf that a couple of big glitzy palaces to consumerism stuck out near the ring road were seen to be somehow about to pull the life out of our centuries-old multi-layered beautiful history-soaked city.

The tedious propaganda wasn’t all on one side, of course. I was somewhat surprised that there wasn’t a massive public outcry/outburst of laughter at the leaflet distributed by Oakgate and partners, in support of the stadium development. It proclaimed: ‘John Lewis coming to York – CAN IT BE TRUE? – IT’S UP TO YOU!’ When I looked out of the window my neighbours weren’t dancing in the streets, but clearly should have been.

I got a kind of dull ache in my soul. Point 1 – it’s a shop. It’s not the Second Coming. Point 2 – it wasn’t up to ‘you’/us at all. It was probably already a done deal, as so much work had been invested already in the scheme, and in any case, it’s decided according to planning guidelines (though these are, it seems, bent to fit in the most surprising fashion when required), not because Mrs Smith from Acomb sent in a tear-off slip.

Basically, it’s been a depressing thing to observe. There’s been much scaremongering on both sides. It seems to me that the only sane voices have been from the Green Party, and those who are broadly sympathetic to them, and from some members of the general public who have commented on the York Press website. These voices were usually lost in the middle of an increasingly vociferous debate mainly consisting of a few people expressing the same entrenched opposing views.

On balance, it seems that approving the plans was inevitable and necessary. That doesn’t mean it’s good, in the longer term. Putting this massive development out at Monks Cross seems a bit short-sighted, and in a few decades we might want to move the stadium back into the city centre. I don’t know if the concerns regarding yet more traffic on an already congested ring road have been addressed.

York has always been a bit behind the times, slow and cautious. This is a good thing, sometimes, and I guess that’s why we never got that hideous new inner ring road proposed in the 1970s. We seem to wait to see what other cities do. Other cities have put sports stadiums outside town, so now we’re going to. Though, if we were really cool and modern and inspiring and brave we would have found a way to locate it at York Central. Instead sports fans have been offered a rather uninspiring construct in the middle of an equally uninspiring retail park.

I’m not a football fan, but my partner is a York City fan. We live close to Bootham Crescent. I know what our football club has endured in the last ten years or so. The least impressive human traits, circa 2001, demonstrated by a few individuals, followed by massive solidarity demonstrated by thousands. 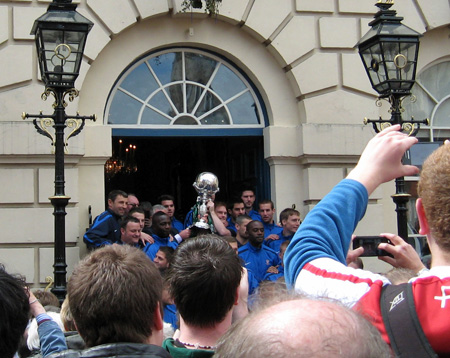 Some of those opposed to the stadium development see it as an unfair ‘bailing out’ of a business in difficulties. A rather bizarre stance. The football club isn’t just another business. It represents the city, and must mean something to a lot of people, judging by the coachloads of people following it to Wembley. Many York residents support the club in a less proactive fashion, wishing it well in the play-offs and other important games, and enjoying the reflected glory of any impressive results.

And perhaps, like me, many of us had a period of being a fan, in the past. I was at Old Trafford when plucky little York won 3-0 against Manchester United, and will also never forget standing on the Bootham Crescent terracing with Eric Cantona on the pitch only a matter of metres away, with York fans singing rude songs at him. And the thousands of people heading down Bootham, and the massive Manchester United team coach turning into Bootham Crescent. I don’t recall any other York-based ‘business’ providing such excitement and so many memorable moments.

So, if it is the case, as we were assured it is, that the club could not survive unless it was given a new home, then the approval of the planning application is a good thing. Because I can’t imagine a city like York without a football team. There are only a few things which provoke pride in one’s town or city. It changes always, of course. I used to feel pride when a train I was on said ‘BREL YORK’ on the carriages. We could also be proud that we manufactured famous chocolate and confectionery. We’ve lost a lot of those things that meant ‘York’ to the vast majority of us who live and work beyond the somewhat gentrified walled city. So if we have to accept a less than ideal plan, funded by rich developers, which means we still have a football team, then so be it.

And for the record, I doubt I’ll ever shop at John Lewis or the big new M&S. I’ll carry on visiting the city centre shops, maybe occasionally visiting the Designer Outlet – that other massive retail development which could have ‘killed’ the city centre, but didn’t.

But I’ll spend most of today listening to BBC Radio York, hoping for the right result at Wembley, where many of my nearest and dearest will be watching our team try to get back into the football league.

Links
Impressive coverage of Thursday’s meeting on the York Press website: Stadium and new shops get go ahead – with over 300 comments …

What do the York City community need in a stadium? – James Waterson in When Saturday Comes

Lisa @YorkStories is the creator, administrator, and writer of content on www.yorkstories.co.uk. She can be contacted on this link or via Twitter, @YorkStories
View all posts by Lisa @YorkStories →
Tagged  Bootham Crescent, YCFC
To link to this page's proper location please use the > permalink