Asylum Lane and the ‘Cathedral Boys’ 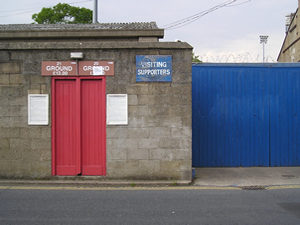 A tweet this week alerted us to an important anniversary. York City Association Football Club played their first game at Bootham Crescent on 31st August 1932.

An old film previously mentioned on these pages (see links below) shows the team in training at Bootham Crescent in 1938, when the ground was quite new. The lovely posh voiceover wishes the team good luck, and calls them the ‘Cathedral Boys’. This didn’t catch on, it seems, and York City are now generally known as ‘The Minstermen’ – the Cathedral Boys grown up.

Maps from 1931 show the land now occupied by the football ground marked as a cricket ground, with a bowling green in the top (north-west) corner. The road running to the south is marked as Asylum Lane. The cricket ground seems to extend into the area of the street, leaving only a narrow roadway. 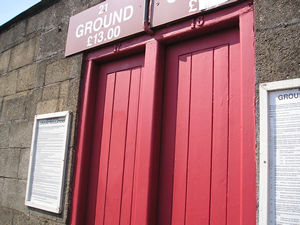 In 1932, after the opening of the football ground, discussions took place with Barker’s Charity, who owned the land, regarding the widening of the road. Agreement wasn’t reached until a year or two later, when the council minutes mention ‘removal of the bill posting boarding to the new street line’. The same one as it has now, presumably. Back then the posters perhaps advertised Capstan cigarettes, now they advertise McDonalds.

The ground became known as Bootham Crescent, though technically its entrance isn’t on that street. ‘Asylum Lane’ perhaps didn’t catch on, unsurprisingly.

York City Council’s Streets and Buildings Committee discussed the possible renaming of Asylum Lane in a meeting on 15 January 1935. The full committee of 12 February 1935 decided to rename it Grosvenor Road. Presumably in association with the nearby Grosvenor Terrace, the road running alongside the railway line where ‘Asylum Lane’ met the footbridge. 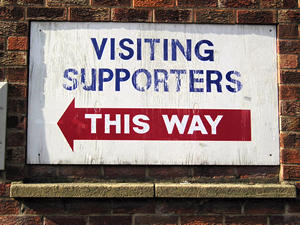 Those Cathedral Boys of Asylum Lane, the Minstermen of Bootham Crescent, will be moving soon to a new ground at Monks Cross. Photos published earlier this year in support of the move showed how tired and dilapidated the old ground is looking in the areas beyond the clearly well-kept pitch and surrounding stands.

Another mention in the council minutes of old suggests that some of these problems in the ‘behind the scenes’ areas are not new:

RESOLVED – That notice be given to the York City Association Football Club, Ltd, to abate the nuisance arising on their premises at Bootham Crescent from defective sanitary arrangements.
– Unhealthy Areas Sub-Committee, 1 May 1934

Perhaps even the most impressive sanitary arrangements would have struggled in those days – an FA Cup game in March 1938 saw 28,123 people watch York City play Huddersfield Town at Bootham Crescent.

Film clip on britishpathe.com: the team in training at Bootham Crescent, in 1938. The film also captures, in the background, the lost street of Pickering Terrace.

Asylum Lane was so called because it leads to the back of Bootham Park Hospital, the original city asylum, which opened in 1777. The name applied to the whole length of the lane, from Burton Stone Lane to Wigginton Road. It was cut in half by the opening of the railway line to Scarborough in the 1840s.

Thanks to @VitalYorkCity and @Grovesred for tweets alerting us to Bootham Crescent’s 80th birthday.

By Lisa @YorkStories • 2 September 2012 Histories
Tagged  Bootham Crescent, YCFC
To link to this page's proper location please use the > permalink