A bandstand and squirrels, Museum Gardens, 1978 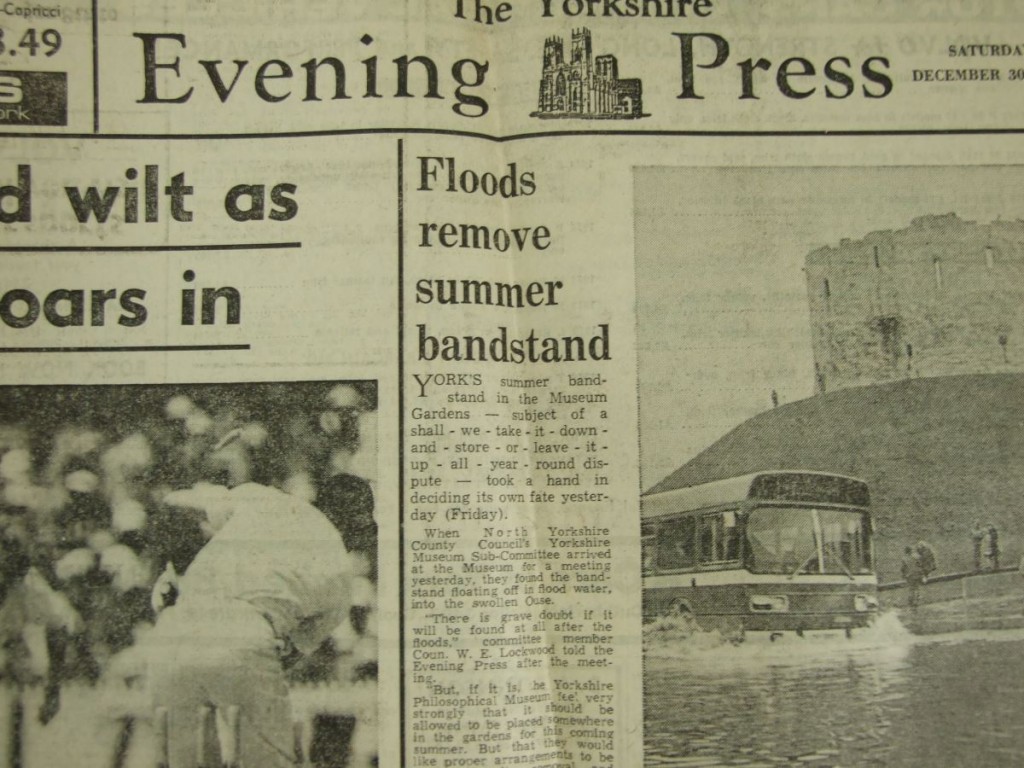 It may be time to leave the subject of the floods, for a while. But before we do, I can’t leave the 1970s newspaper without mentioning a couple of other things reported in that edition of the Yorkshire Evening Press of 30 December 1978.

Bandstand ‘took a hand in deciding its own fate’

I’m sure we all remember the bandstand dispute of 1978 …

Under the headline ‘Floods remove summer bandstand’ the YEP reported:

When North Yorkshire County Council’s Yorkshire Museum Sub-Committee arrived at the Museum for a meeting yesterday, they found the bandstand floating off in flood water, into the swollen Ouse.

“There is grave doubt if it will be found at all after the floods,” committee member Coun. W. E. Lockwood told the Evening Press after the meeting.

“But, if it is, the Yorkshire Philosophical Museum feel very strongly that it should be allowed to be placed somewhere in the gardens for this coming summer. But that they would like proper arrangements to be made for its removal and proper storage each year at the end of the season.”

Several paragraphs follow, detailing the dispute. The Sub-Committee were considering the conflicting views. ‘Now, they will wait to see whether the bone of contention surfaces again after the floods.’ The Hospitium in the Museum Gardens was under four feet of water, and ‘the bandstand was seen banging against the windows before it went over the railings.’

Not lost in the flood were about a dozen grey squirrels which have recently taken up residence in the Museum Gardens. These, the Sub-Committee heard from the Curator, Mr. Michael Clegg, “have rapidly become star attractions to the public.”

Mrs Mary Pierce, a museum cleaner, had struck up a rapport with the squirrels. There had been educational benefits, as Mrs Pierce had ‘laid on a squirrel performance’.

The paper reported that ‘the peacocks, including the two 1978 hatchlings, now have competition.’ And members were told that the squirrels will not damage the Museum’s trees. But there were concerns that if they get too tame they may damage some of York’s tourists, by leaping onto the shoulders of visitors, expecting a fuss, whereupon nervous visitors might shake them off, and the squirrels might ‘get nervous themselves, and inflict a bite.’

Did the bandstand ever come back? If it did, was the store it/leave it out all year bandstand dispute ever resolved? Was anyone ever bitten by the squirrels? I’ll leave these questions with you, dear readers.

Lisa @YorkStories is the creator, administrator, and writer of content on www.yorkstories.co.uk. She can be contacted on this link or via Twitter, @YorkStories
View all posts by Lisa @YorkStories →
Tagged  1970s, floods, Museum Gardens
To link to this page's proper location please use the > permalink