A few little things noticed and appreciated during a quick dash into town earlier this week. 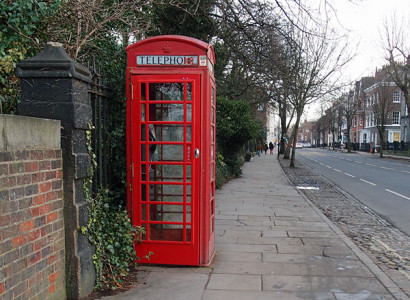 The phone box on Bootham, previously mentioned in A tale of two phone boxes, now has a replacement door. I never did get around to mentioning its sad state to BT, but perhaps someone else did. Or perhaps BT just mended it eventually anyway, without anyone contacting them.

I know it’s just a phone box. But it’s a red phone box, and they’re not exactly common now.

I thought it would stand there neglected and doorless until, eventually, it was removed, as it’s hardly ever used, and the money it takes can’t possibly cover its upkeep, never mind make a profit. But no, we have a new door. Nice. 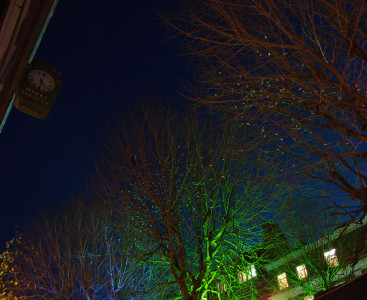 Darkness falls early on these short December days. And as it falls, birds gather in the trees on Parliament Street.

I could hear cheeping when I was over the road by HSBC bank. It seemed surprising to hear loud bird noise in the city centre, and as the street is full of the St Nicholas Fayre stalls I thought, initially, it was perhaps a recording of bird song.

As I got closer to M&S I noticed many people staring up into the trees and taking photos. The branches were full of small birds. Long-tailed tits I thought. But in the city centre? So many? Above a crowded street full of shoppers and stalls and music playing?

(Update: December 2014. I wasn’t absolutely sure they were long-tailed tits. We get flocks of those passing through the garden sometimes, and the Parliament Street birds didn’t seem to have the same flight/behaviour as they moved from tree to tree. I couldn’t though think of another bird these birds could be. Then one afternoon in summer 2014 I was sitting near Clifford’s Tower and noticed a pied wagtail nearby. Watching it awhile I realised that the Parliament Street birds might be wagtails. They gathered again in winter afternoons in 2014, and I noticed were mentioned on Twitter. Discussion followed as some observers were convinced these were long-tailed tits. After some Googling for info we got a proper ID. Bird watchers and people who know their wildlife recognised these as wagtails, often known to flock together in city centres in the winter.)

Difficult to get a clear photo, but it’s a bit clearer if you enlarge it – all those pale blobs in the branches are birds. So many. Lovely cheery little things. They gather there every day, apparently, and if you’re in town around 4.30pm it’s worth a look. Particularly if you’re fed up and stressed by Christmas shopping. 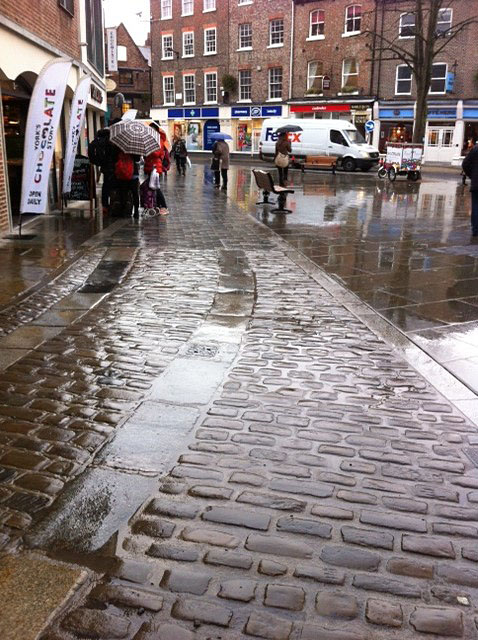 The older cart tracks and setts, retained in King’s Square, near the Shambles/Newgate corner

The new paving in King’s Square has been the focus of much attention. My attention was so focussed on it I forgot to have a look at how much of the old paving had been kept.

We tend to take photos towards the most picturesque corner, where King’s Court and King’s Square meets Newgate and the entrance to the Shambles. A view from that corner, rather than towards it, shows more clearly that a lengthy section of the older cart tracks and setts has been retained. More than was originally intended, it would seem.

I’ve checked, and paving work is completed on this side of the square. So these old stones are staying. Which is another little thing I found quite pleasing. More on this story later, perhaps.