Even a stopped clock

‘Even a stopped clock tells the right time twice a day’ — as the saying goes. 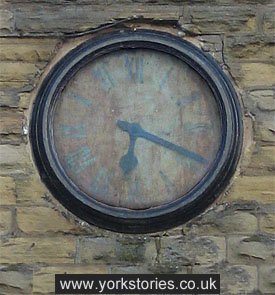 Here’s one I’ve only recently noticed, having now developed public clock awareness after the page on the factory clocks.

It’s small, and rather grubby and faded, and in fact barely visible. The photo needed some digital enhancement to make it obvious that there’s a clock face in there. The clock stopped at around 6.20, decades ago by the look of it.

Having focussed my camera on these details, my mind focusses too while making these pages.

What seems initially straightforward often prompts many questions. All these small things link to something else, meant something, are there for a reason.

I used to research these things and put the answers on here. These days I’d rather think about the questions.

This little clock face, faded and forgotten, makes me wonder:

Was it wound by a person? Perhaps the person who looked after it noticed more impressive clocks nearby, like the flashy Norwich Union (now Aviva) one on the other side of the bridge, and thought theirs was relatively small and humble and now redundant. Maybe one day they were about to wind it and sat for a moment and thought, ‘this is pointless, look at that massive popular clock on the other side of the bridge, everyone looks at that now. And anyway, they’ve all got their own watches. This clock-tending is a bit pointless really. There are loads of them now’ — and went off and had a cup of tea instead.

Or maybe it was powered by electricity and the supply stopped. Maybe the person who paid for the electricity died. Or just got fed up and left. And the clock had its quiet death, without ceremony, at 6.20ish one morning/evening, when the supply was cut off. 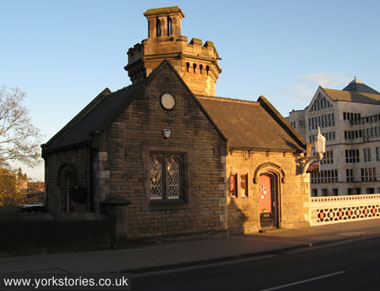 If you’ve not noticed it either, and wonder where it is: Lendal Bridge.

Lisa @YorkStories is the creator, administrator, and writer of content on www.yorkstories.co.uk. She can be contacted on this link or via Twitter, @YorkStories
View all posts by Lisa @YorkStories →
Tagged  clocks
To link to this page's proper location please use the > permalink