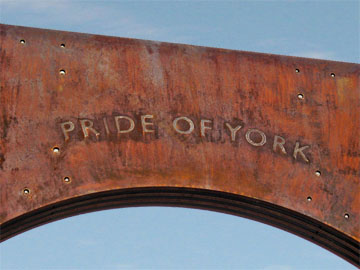 A while back I stumbled upon a rather quaint and dated description of the city of York. Not from the far distant past, but from recent years, in the Guardian’s information on the York Central constituency, on a page apparently compiled around the time of the 2010 election.

In a short constituency profile: ‘York is an elegant town with medieval history, a railway centre and manufacturing industry, plus tourism and a university.’

Manufacturing industry? A railway centre? One university and tourism as an afterthought? When was this written, 1970?

Clearly the Guardian needs to update its constituency profile, which might as well say that York is called Eboracum and has some excellent bath houses, or that we stick severed heads on spikes at Micklegate Bar.

Perhaps for a more up to date view it could refer to a recent article in the Economist, headlined ‘Northern Light’. York has seen many changes.

The article suggests that this is all to do with the current administration and ends up reading rather like a party political broadcast on behalf of the Labour Party in York. Or like propaganda for the draft Local Plan.

It reminded me that there are many ways of seeing a place, and it all depends on who you talk to.

I’ve lived in York for all my 40+ years, apart from three years away at university. I know I’m guilty of that possessive thing you feel when you’re still in, or have returned to, the place you were born and bred, a feeling which increases with the passing years. It’s always odd to read other people’s descriptions of a place you know really well and feel a great attachment to. It’s a bit like someone offering a critique of your mum.

In many ways York in 1993 seemed a far ‘richer’ place than it does now. It has lost a lot since, but perhaps that loss is recognised and felt only by some of us, maybe by people of my age and older, from a similar background.

The changes have been massive. Just as in many other towns and cities.

But York was never going to suffer the kind of decline other places did, simply because it’s so beautiful and such a desirable place to live. That was just as much the case twenty years ago as now. It’s one of the reasons I came back. Its attractiveness, as the article states, is its greatest asset. It is attractive because it has managed to retain so many historic buildings and has only a few really ugly ones. But it has buildings from every decade, which is why it’s rather suprising to read again the suggestion that ‘the city council has been fiercely hostile to new building.’ (Andrew Lindsay) When I look at some of the more recent developments I wish they’d been a bit more fierce in their hostility.

All they are really is ‘cautious’, and it seems odd to criticise this approach while also acknowledging that York’s greatest asset is its attractiveness. The hostility/caution regarding new building is what has helped preserve the historic buildings, and their wider setting.

One of the most troubling assessments comes from Danny Dorling, who suggests that York is ‘a chunk of the affluent south east dropped in Yorkshire.’
Is it? Is it really? I would have thought York people would be incensed by this, but it appears to have gone unnoticed. Maybe then we’re not as proud as we were twenty years ago. The city has lost its identity to the extent that it’s a chunk of somewhere else, more like the south east than Yorkshire, and everyone’s happy with that. And what does it say about the rest of Yorkshire: Yorkshire’s a bit rubbish but never mind, York’s alright because it’s like the south east? I’m a bit tired of these patronising London-centric views.

The article, I have to say, has been warmly welcomed and praised by many people. Obviously James Alexander liked it. So did many Labour supporters. Many people agreed that they wanted York to get building new housing as soon as possible, on green belt if necessary. I’ve written about that, discussing the value of the ‘green belt’ and whether we who already have homes should be so concerned with protecting our views and open space when new homes are needed.

How many homes though?

‘James Alexander, the city’s council leader, wants to build around 1,100 new houses a year over the next decade’.

This made me imagine him on a building site with a stack of bricks, building them himself — and I have to say that comments I’ve heard and read from people in the building industry suggest he might have to. Restrictive rules on affordable housing requirements are making building difficult, and according to those in the know the targets are completely unachievable. The piece helpfully (and alarmingly) states that the suggested target is ‘a rate of construction comparable to fast-growing Milton Keynes.’

York and Milton Keynes. I don’t need to expand on that really.

I remember York when it was railways and chocolate. It had its own, proper northern — if slightly posh northern — identity. Now it’s a chunk of the south east and aiming to be a bit like Milton Keynes?

Lisa @YorkStories is the creator, administrator, and writer of content on www.yorkstories.co.uk. She can be contacted on this link or via Twitter, @YorkStories
View all posts by Lisa @YorkStories →
Tagged  Local Plan
To link to this page's proper location please use the > permalink