Before leaving the subject of clocks, I wanted to include a photo of this one, sent to me by Ian Dixon.

It’s not the type I’ve included on earlier pages, which were all street clocks or factory clocks. This too is a factory clock, but it lived inside, and once controlled factory time at the glassworks in York (Redfearn National Glass, pictured below, and previously mentioned on this page).

Ian would be interested in hearing from anyone who remembers the clock in the factory. If you do, please add a comment below.

Located near the works fitters workshop, it was used to set the time for the whole building, wired up to all the clocking-in clocks and clock dials, so factory time was controlled from one place. An easy and accurate way of controlling time in factories as it meant only one clock to worry about (and change twice a year when the clocks go forward/back an hour).

Apparently it was rescued from the factory when it closed, by a man from Acomb, who had it in storage until a couple of years ago. Ian has serviced it and replaced worn parts and restored it. It’s now on his living room wall.

Ian notes that the clock isn’t particularly valuable, but it is ‘a nice piece of history’. He intends to fit a small plaque inside it showing the factory dates. 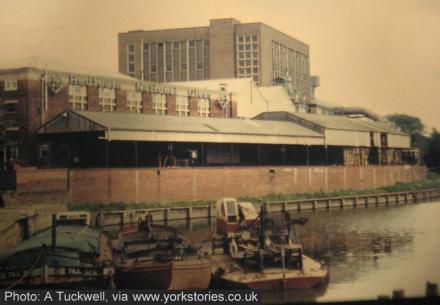 Andy Tuckwell’s photo of the factory dates from 1977. It closed the following decade.

A glassworks had been on or near the site since the 18th century, my rather rushed Googled research suggests.

The factory buildings were demolished in the late 1980s. A hotel now occupies the site.

See the earlier page for Andy’s memories of working here for a short time in the late 1970s.

Thanks to Ian for the photo and information.

By Lisa @YorkStories • 7 July 2013 Details
Tagged  clocks, factories, glassworks
To link to this page's proper location please use the > permalink