On the Foss barrier, failure, and floods 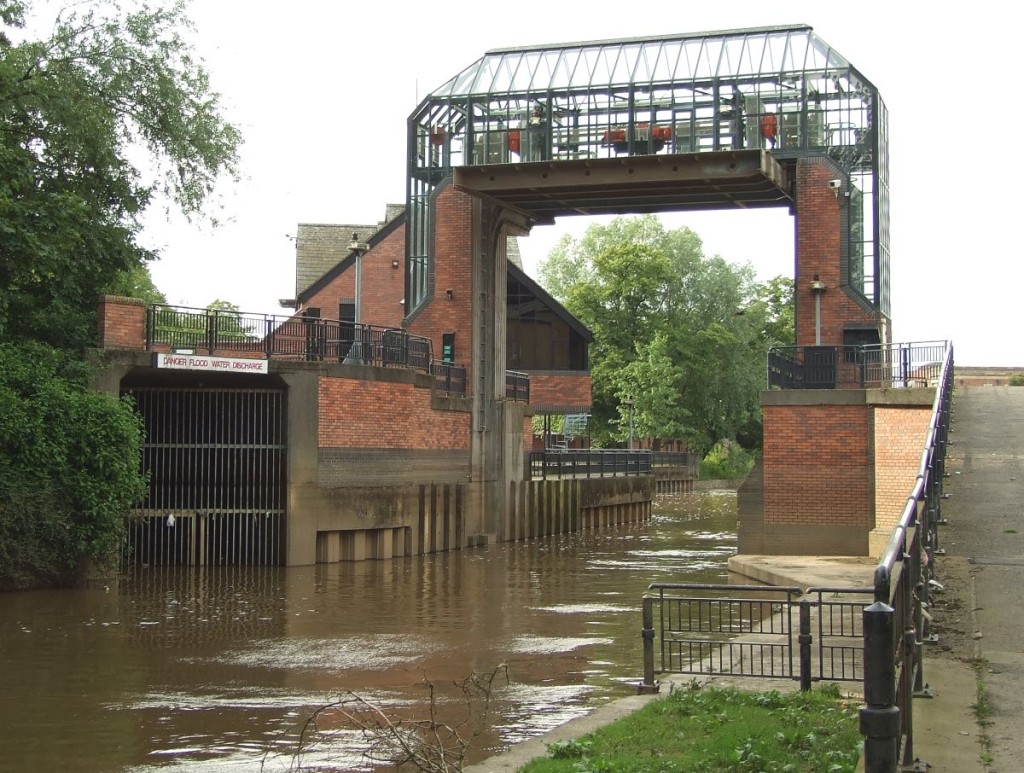 The Foss Barrier in summer 2007

I think we all know what this is. It’s the Foss barrier. Pictured here in 2007, when it was quietly doing its job whenever it was needed, before it became famous/notorious for its failure, at the end of December 2015.

I suspect that most of us took it for granted. I did.

I managed to take a photo, seven years ago, when down this way taking lots of other photos of things that at the time seemed more photogenic/interesting/important.

But in recent days it has become painfully obvious just how crucial it is, this structure near the confluence of the Ouse and the Foss. Its failure meant the flooding of so many homes and businesses, in a city where traditionally (in recent decades anyway) attention seemed to focus on the Ouse, the city’s main river.

The photos of the floods in recent days were shocking, but reminiscent of images in a gallery of photos on the local Press website, taken during the floods of 1982, before the barrier was erected. I’ve borrowed a few as it doesn’t seem possible to link to them individually, and I wanted to highlight certain streets, which have flooded this year again. The full gallery (and larger versions of these) can be viewed on the Press website. 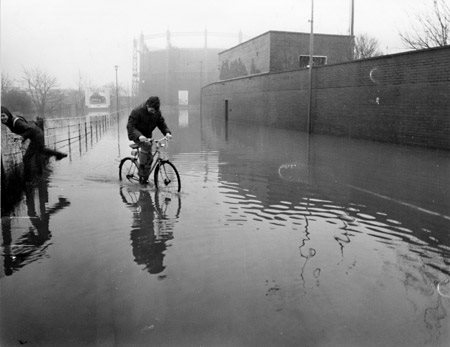 In 1982, and presumably in all the other major floods before that, Foss-side streets like Walmgate, Fishergate, Foss Bank and Foss Islands flooded. 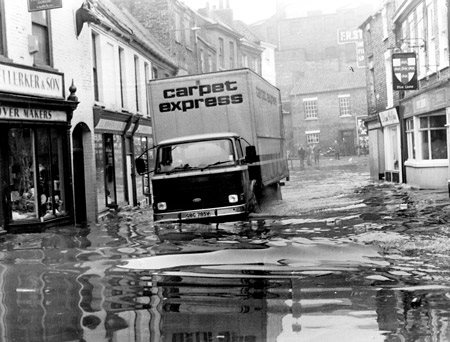 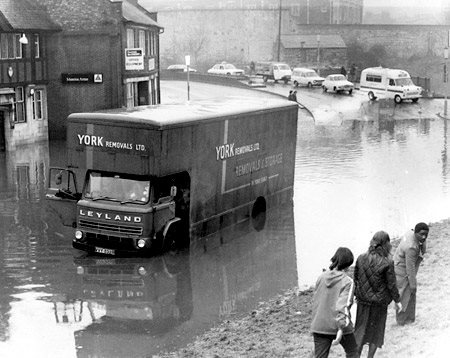 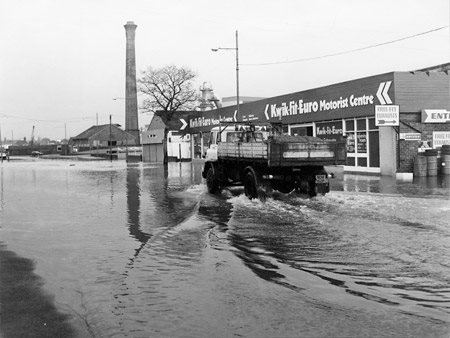 As did Marygate, North Street, Tanner’s Moat up to Rougier Street – though these streets, alongside the Ouse, are now protected by flood defences in the form of walls with gates, closed during floods.

Could the same be done on the Foss? Walls with floodgates? I’m thinking that the answer is probably no. It’s a slower, more meandering kind of thing, the Foss. Usually so small and slow that it’s forgotten about. Tourism organisations seem to forget about it entirely, and focus on the Ouse, ‘the city’s river’. The Foss has always been off the radar, rural-looking into industrial. In living memory it weaved its way into town through the gasworks on either side of its banks, past industrial buildings on Foss Islands and in the Hungate area, towards its confluence with the Ouse. Now it passes its way through more residential properties, many built in the last decade, off Huntington Road and in the Hungate area.

Looking at aerial photos of the floods in the city end of Huntington Road the most striking thing was the number of cars parked near the new residential developments recently constructed in the bend of the Foss where ten years ago I remember taking photos of rather nondescript light industrial units. The people who live here now, in the homes built on this bend in the Foss, did they know what might happen? Were their new homes built with flood protection measures in mind? Some of the blocks have garages at ground level, some don’t. I can also see from the recent aerial views of the floods that a lot of cars parked outside the flats have been half submerged by the floods, as if the residents were taken completely by surprise.

The Victorian terraced houses near them, also on the Foss side of Huntington Road, will have survived many floods. I remember visiting one in the mid-90s, and the owner talking about the flooding of his garden in the past. Gardens can cope with flood events. The cars parked by the modern flats nearby, and the contents of the houses in the area, clearly that’s a different thing.

And all that was dependent on the Foss barrier?

The Foss used to flood all the time, just as the Ouse did, but we’ve built a lot of new residential property right next to it, and this continues, in the Hungate area. As if it’s all safe now. Presumably all these buildings have been designed to cope with flood water in the lower parts, without that leaving an expensive trail of useless damaged valuable things behind? Or is it all based on trusting the Foss barrier?

Looks that way. Maybe time for a rethink then. It was state of the art at the time it was built, I guess, but it seems ludicrous how much trust we’ve put in that one structure to save all the homes and businesses round the Foss, as its failure sent the areas around it back to the 80s, or to even earlier, medieval times, as the old river found its level like the interventions never happened. A ‘strong brown god’, just like the Ouse. 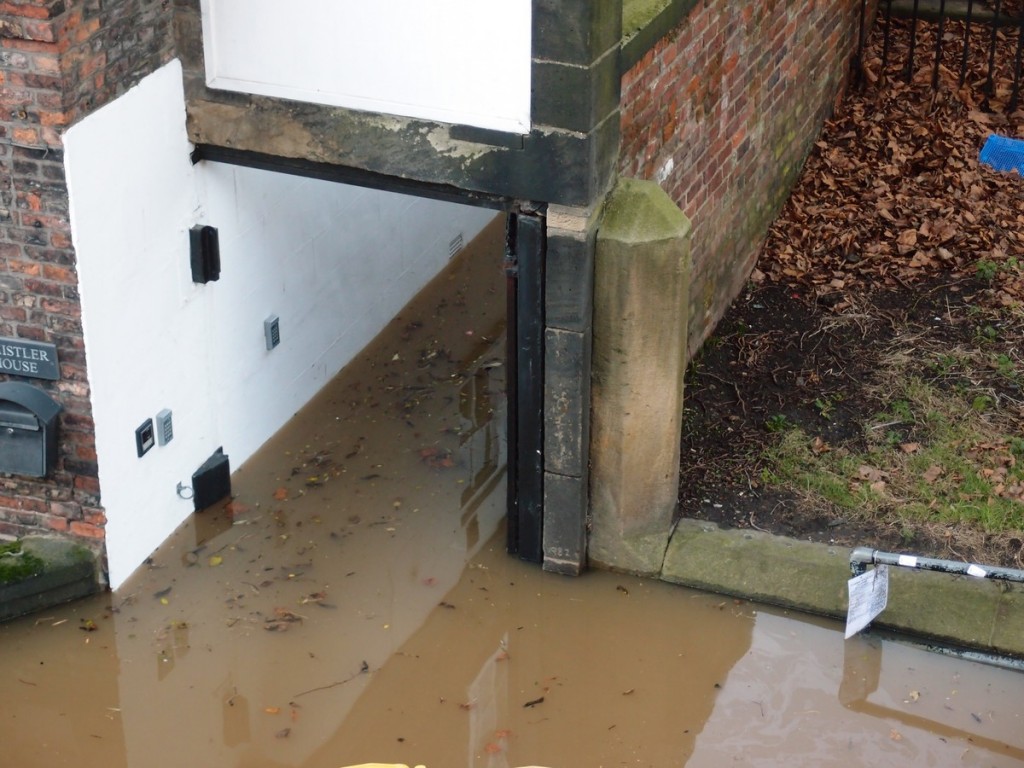 I do not know much about gods; but I think that the river
Is a strong brown god—sullen, untamed and intractable,
Patient to some degree, at first recognised as a frontier;
Useful, untrustworthy, as a conveyor of commerce;
Then only a problem confronting the builder of bridges.
The problem once solved, the brown god is almost forgotten
By the dwellers in cities—ever, however, implacable.
Keeping his seasons and rages, destroyer, reminder
Of what men choose to forget.

Lisa @YorkStories is the creator, administrator, and writer of content on www.yorkstories.co.uk. She can be contacted on this link or via Twitter, @YorkStories
View all posts by Lisa @YorkStories →
Tagged  floods, floods2015, Foss
To link to this page's proper location please use the > permalink