But it did seem necessary to take up the opportunity being offered to wander around the Engineers’ Triangle, as it’s not a place we the public get to wander around normally, and it sounded like somewhere everyone should go at least once. Particularly those of us from a railway family. Have I mentioned that before? ;) 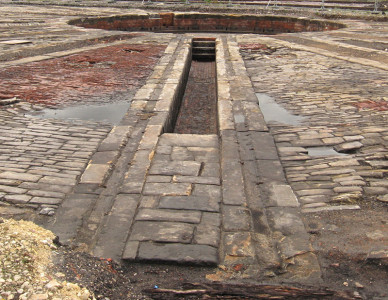 The foundations of 19th century roundhouses, used to service locomotives, have recently been uncovered in the area between the railway lines, close to the station. (A roughly triangular area, hence the name.)

It appears that at least one of the roundhouses was demolished as recently as the 1960s and that there are plenty of people who remember them. 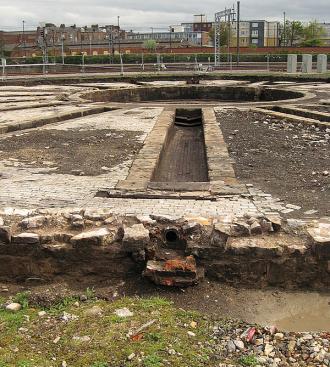 The site has been opened to the public today and tomorrow (27th and 28th April).

There were three of these structures, buildings once, now just foundations/patterns of brick and stone, their shape perhaps clearest from an aerial view, but I didn’t have a plane to hand. 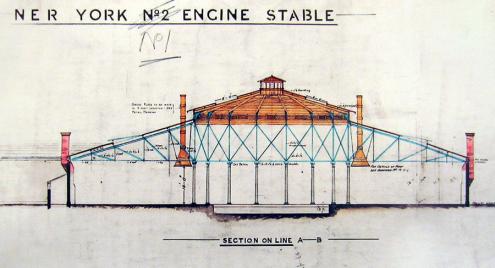 Best to focus perhaps on the interesting details in the exhibition tent. Including this handsome plan/drawing, presumably of the original structures, titled ‘YORK ENGINE STABLE’. Which reminds me that we called the locomotive an ‘iron horse’ – it too needed its ’stable’. 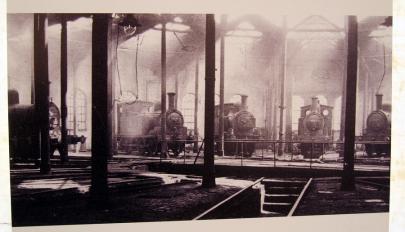 There wasn’t a caption on the photo above, so I’m not sure if it’s a record of one of the roundhouses here, or a roundhouse, elsewhere. Lovely though, isn’t it.
(Update: it is the interior of the larger 1864 North Eastern Railway roundhouse – see information added by Ed, in the comments below.)

The display included the plans for the site’s development, and a sizeable collection of artefacts discovered on site during the recent excavation. Including the rusty old shovels mentioned above. 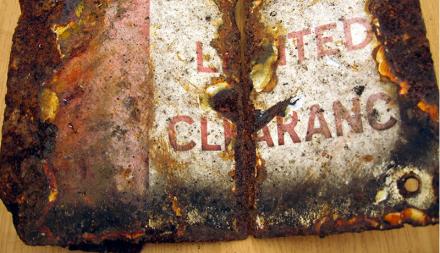 My photos of shovels weren’t particularly impressive, so instead here’s a photo of a rusty old sign.
(The rusty old shovels, plus some other (big) photos have since been added to a set on flickr.com.)

I love the idea of some unknown, anonymous workman chucking an old shovel in a corner and it now being displayed with a label attached, as part of an exhibition. Would he be laughing at me studiously studying these rusty bits of metal? Probably.

I thought of my great-great-great grandfather, working on the Permanent Way when the railways first cut their way through from York to Scarborough, and my great-grandfather who arrived, via that railway system, here in York as a railway porter, working on York station, a stone’s throw away. And all the other ordinary blokes doing their work, keeping things running. 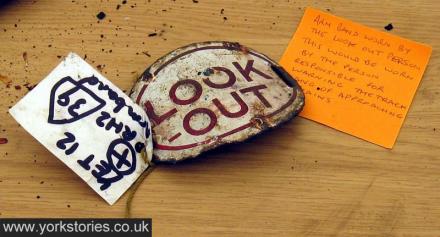 Nice that visitors were encouraged to add explanatory notes to the assembled objects, some of which hadn’t been identified as yet. It wasn’t clear which were visitor contributions – all of them? – on post-it notes. I couldn’t add anything, having no useful knowledge. I recognised a brick. Adding a post-it saying ‘this is an old brick’ didn’t seem like a useful contribution.

This note above, on the other hand, offered interesting information (can be enlarged, as can the others).

There are more photos from the site in my set on flickr.com – York South (Engineers’ Triangle).

There’s a clear map of the location of the Engineers’ Triangle (also known as York South) on the Rail UK site, plus a photo of the buildings before demolition, and more info on the buildings at the Loco Sheds site.