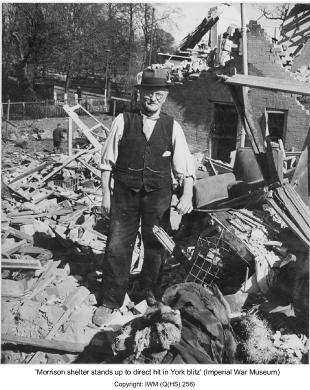 The 70th anniversary of the ‘Baedeker’ raid is being marked in an imaginative way – on Twitter – @BaedekerLive. You can follow events ‘as they happened’, if you’re able to stay up all night. The Twitter feed is viewable now, or later, on this link. It’s an excellent idea. The 140-character message seems the perfect form to convey the urgency and chaos, the widespread reports of damage, of that night 70 years ago.

This image, courtesy of the Imperial War Museum’s collection, shows the effect of the raid on one property. The caption explains:

“This house was almost totally destroyed in a direct hit by a bomb during the ‘Baedeker’ raid … Its owner, Mr McGregor, is shown standing amidst the remains of his home. Mr McGregor and his wife (plus their lodger) were protected from the bomb blast and collapsing masonry by a Morrison air raid shelter. This shelter is visible under rubble to the right of the photograph.”

Though I was born decades after the war, the Baedeker raid has felt ‘close to home’ since I read about it many years ago, and realised how many people died in streets close to where I live.

There are already many pages on this website with further information on the raid and its effects. On 29 April 1942, Stephen was living to the north of the city, Audrey was on Blossom Street, close to the Bar Convent, where five nuns died.

Many people lost their lives that night. William Milner died at York station. Arthur Broadhead died on Bootham. Six year old Betty Pope died in the Queen Anne’s School shelter. Dorothy Thompson died in Nunthorpe Grove. Her body was found on 7 May, at the bottom of a bomb crater.

Perhaps the best place to visit to reflect on the destruction of that night, the devastation brought about by war, and the importance of forgiveness and reconciliation, is the church of St Martin le Grand, on Coney Street. Its book of remembrance is shown on the front page of this website. The book is currently on loan to York Libraries, and is part of an interesting exhibition in York Explore (Central Library).

We must also remember the devastating effects of our bombing of ‘enemy targets’. One month earlier, for example, in Lubeck.

As I’m still awake, and there’s no update on @BaedekerLive, it seems as good a time as any to mention/query the fact that some sources give the date of the Baedeker raid on York as 28-29 April, some as 28 April. Most say 29 April, as it was in the early hours that the bombing began.

A piece on the BBC website says “The county town of York heard the approach of enemy aeroplanes at midnight on 28 April”. Doesn’t seem enough to place the raid as happening on 28 April, does it. But the Wikipedia article does, as did a recent article on a York-based website.

Some sources give the number of civilian casualties as 70-something, others as 90-something. Quite a discrepancy there.

The York Press coverage fluctuates on the numbers, even within the same paper, within the last week or two.

A variation of 20 seems a little too vague. A solution seemed to be to trace each name on the list of known casualties to the official Commonwealth War Graves Commission records (list above – Civilian casualties list).

The discrepancy was obvious – it’s due to the weird boundaries at the time, which had half of the Clifton district under Flaxton District Council. This included houses in the Kingsway area. Clearly very much part of York as we know it, and well within the outer ring road, and not far from where I live.

A lot of people died there, and it seems odd that in the 21st century remembering some sources continue to discount them from the numbers.

Lisa @YorkStories is the creator, administrator, and writer of content on www.yorkstories.co.uk. She can be contacted on this link or via Twitter, @YorkStories
View all posts by Lisa @YorkStories →
Tagged  Baedeker raid
To link to this page's proper location please use the > permalink