All change on Newgate Market 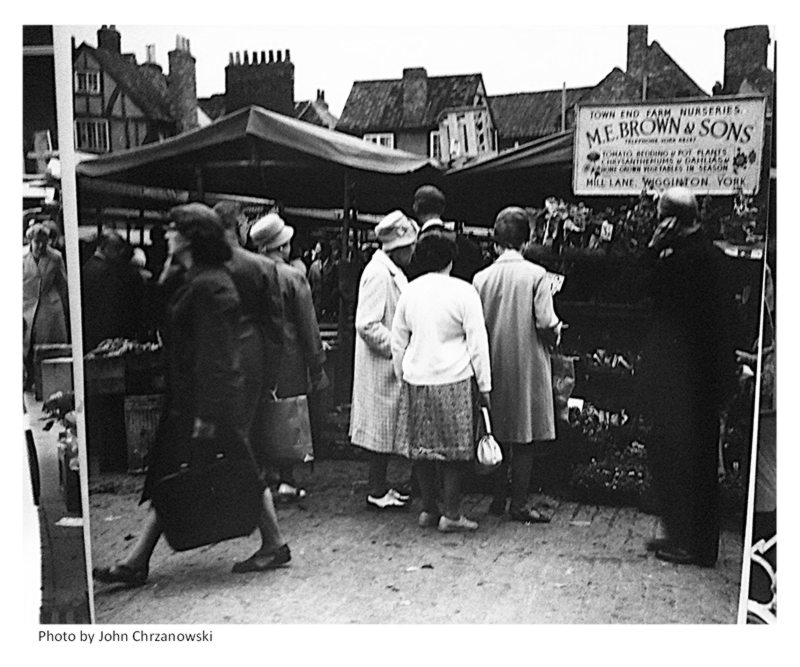 1964 was the year the market moved to Newgate, from Parliament St (so I’m told, it’s a bit before my time). And in its fiftieth year it’s undergoing a major transformation. Or ‘reinvigoration’ as we seem to call transformations now.

It would be interesting to know what these customers were saying about the new location, and what letters to the local paper said about it at the time.

Letters to the paper now, and online comments elsewhere, suggest that many people think it should never have moved here and should be back in Parliament Street, its earlier home. Though not of course its home from ‘ancient times’, as Parliament Street was a 19th century construction, cutting a wide new street through the earlier layout of narrow streets.

It was obviously the intention when Parliament Street was created to put the market in a highly visible central location, and it still works well for that, as it’s a busy thoroughfare, and has the entrance to M&S on it (which is one of the main reasons it’s so busy). 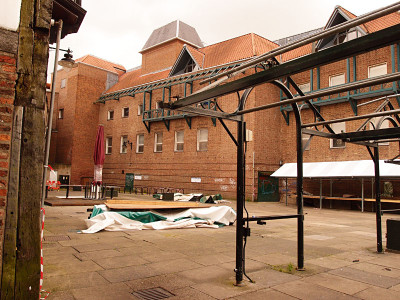 Back of M&S, from Newgate Market

Whereas Newgate has the back of M&S in it, which is a different thing entirely. As revealed clearly here now the market stalls have been cleared for the refurbishment work. Here in Newgate Market M&S is mainly a big bulky thing blocking out the light.

The area occupied by Newgate Market is also of course a space cleared of buildings. Narrow medieval streets ran through here too, and we’re left with the stubby stumps of them. Around its periphery Jubbergate, Little Shambles, Silver Street. I don’t recall knowing the names of Silver Street or Jubbergate until relatively recently — I would have said ‘that bit of road leading to the market’. I also don’t recall locals referring to it as ‘Newgate Market’, but just ‘the market’.

It doesn’t work that well, as a market place. The M&S end in particular has been for a long time a bit dismal and gloomy, like the market kind of tapers off not quite knowing what to do with itself.

The revamp is supposed to change all that. Here’s a drawing of part of it. 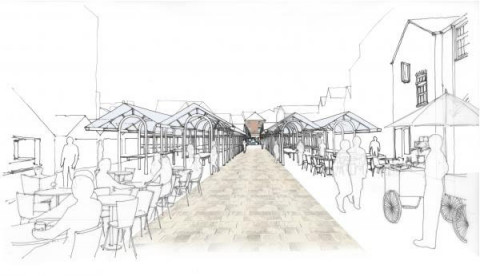 This layout does make far more sense, as it has a central axis pointing the opposite way from before. Before you’d tend to wander through on what used to be Little Shambles, off Shambles, round the buildings in the middle. On this drawing we’re standing at the end of the market with M&S on our left and Shambles off to the right, looking towards Newgate. The building at the end is on the corner of Newgate and Patrick Pool. 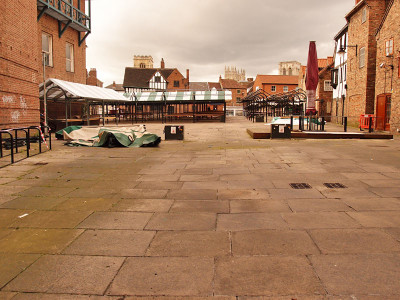 Here’s what it looked like a few weeks back from a similar place, when they’d started to clear this end. I wandered down to get a sense of the open space and to see if any interesting new views presented themselves.

And they did. Rather pleasing, this view.

Shame really that it can’t stay as open uncluttered space, with nicer paving or perhaps even grass here in the foreground, giving us this handsome and picturesque scene of the Minster and St Sampson’s church over an interesting cluster of buildings. 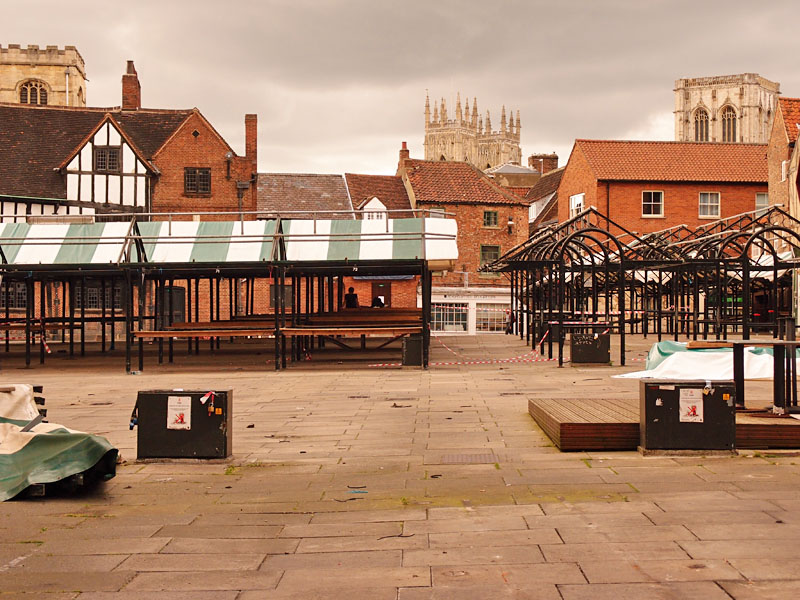 While the work is taking place the market has gone back to its earlier home, in Parliament Street. Where it’s clear to everyone that it benefits from more passing trade than it gets normally, in Newgate. Many people — the majority perhaps — feel that the Newgate market place should be where visiting markets are placed, and that Parliament Street should be again the permanent home of ‘our market’.

There is a feeling, I think, that the prime location of Parliament Street being given to the visiting markets and events is a clear symbol of a general impression many residents and long-established businesses have, that residents’ needs and views are pushed onto the sidelines, out of the way, while things seen as more appealing to visitors get into the spotlight, get the prime spot. I get the impression, from what I’ve heard and read, that it’s frustrating for the market stallholders to see visiting markets in Parliament St so often, while they’re stuck out of the way in Newgate.

I wonder if anyone’s doing a proper study of the stallholders’ takings, over this period when they’re temporarily allowed back into Parliament Street, compared with what they take when in Newgate. I’d be really interested to see that. If the comparison proved what I think we all know, that they make more money in Parliament St, then I don’t know how it can be justified sending them back into Newgate. Whatever they do with it to enhance it, it’s still essentially a strange little space round the back of M&S.

Not forgetting, of course, the prettier buildings opposite, the backs of the buildings making up our famous Shambles. While we await the results of this latest civic improvement scheme, I’ll leave you with an image of my favourite ‘back of the Shambles’ view, framed by the canopies of the old market stalls. 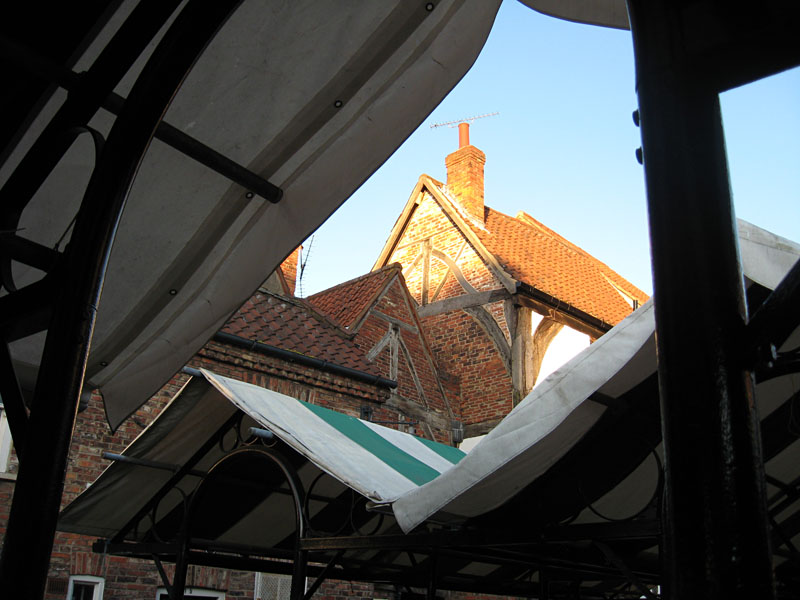 Lisa @YorkStories is the creator, administrator, and writer of content on www.yorkstories.co.uk. She can be contacted on this link or via Twitter, @YorkStories
View all posts by Lisa @YorkStories →
Tagged  market
To link to this page's proper location please use the > permalink