Anyone who doesn’t use Twitter but who reads about it in the papers could be forgiven for thinking it’s just full of abuse, populated by people who use it when drunk to argue with complete strangers. Not so. One of its more interesting aspects is the way it has been used to recreate historical events. I mentioned last spring the brilliant project by York Libraries and Archives to report via Twitter the Baedeker raid events ‘as they happened’ — 70 years on. 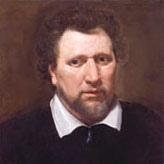 Going back a bit further — 395 years — @BenJonsonsWalk is recreating/reporting a journey undertaken in 1618 by Ben Jonson and a companion, from London to Edinburgh. It uses a recently discovered account of this 400 mile walk, apparently written by Jonson’s companion.

An amusing entry from the early part of the journey:

‘Three Minstrels thrust themselves on us asking if we would hear a merry song, the life & death of my Lord of Essex’ #Hoddesdon #BenJonson

A shame minstrels with merry songs no longer offer to entertain us on our walks.

There’s harassment in the Pontefract area:

‘We took a byway to escape the crowd yet a swarm of boys pressed so upon us, that we were fain to present our pistols upon them’ #Pontefract

And we get an interesting insight into goings on at Sherburn-in-Elmet:

To #Sherburn-in-Elmet ‘where all the pins are made, & is called the great cherry town for we had cherries in the midst of August’ #BenJonson

At Tadcaster, they ‘could get no wine at supper’. Not good, clearly. But they’ve now reached York, and after heading for the famous George Inn on Coney Street, and being greeted —

… ‘where we were no sooner housed but diverse came to see and welcome us’ #York #BenJonson http://t.co/6DjEEISLtW

they have a better offer:

Sir Arthur Ingram’s impressive dwelling was situated near what is now the Purey Cust, at the edge of Dean’s Park, according to this plan (more background information and context here). (Number 22 on the plan is the Deanery pictured in a recent posting.)

There’s a visit to the building we now call the King’s Manor, and —

‘Into the cellar which is the fairest largest & fullest of light that I have seen, 2 springs of excellent sweet water rising in its midst’

The sweet springs are no more, sadly.

It’s evening as I’m writing this, and perhaps Ben Jonson and his companion are now over at Ingram’s mansion being entertained. I’ll be awaiting further tweets with interest, as I hear they are spending a few more days in York before moving on northwards.

Follow on Twitter @BenJonsonsWalk or Facebook or see the website for more, including today’s blog posting on York: The King in the North: ‘York is a significant presence in the ‘Foot Voyage’, and clearly more than an incidental destination.’

By Lisa @YorkStories • 13 August 2013 Histories To link to this page's proper location please use the > permalink.