Beautiful weather for the bank holiday weekend. Who would have thought it? As has been the case recently I had a lot of work to do on the house and garden through most of it, but escaped, with camera, on the Monday. For three short journeys, in fact. Here’s the first, a brief foray into York. 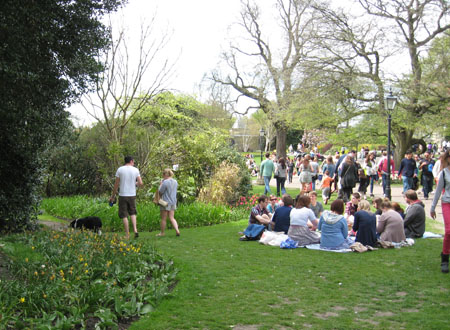 The Museum Gardens looked like the beach at Scarborough, but green grass instead of beach. People sitting at politely spaced intervals, with the space between groups getting smaller, as everyone headed for this green oasis in the heart of the city.

I had hoped to catch sight of the Richard III ‘bring him home’ campaign march, which was supposed to be ending up here, but was too late. There were many people milling about as well as sitting, so a campaigning procession could have been among them, I guess, and remained unseen.

It was a bit too much for me. This photo was taken near the Museum St gates, as I made my exit. 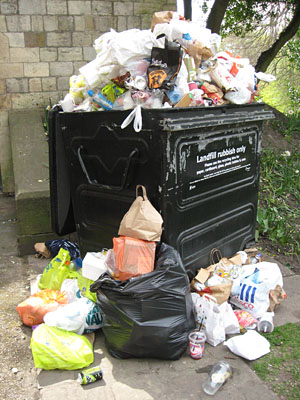 The Museum Gardens is full of natural wonders – champion trees and skilfully planted flowerbeds. But by the gate people had stopped to marvel at this human-created spectacle, and I joined in. As we were in the ‘cultural quarter’, perhaps this was a piece of art, an installation to remind us of how much we throw away, how many landfill mountains we’re making. The approaching refuse truck suggested not. It approached with determination and a crack team of refuse collectors jumped out. ‘I don’t think they can fit it all in there’ said one bystander. Indeed. I didn’t wait to see, but took this photo and ran away down to the riverside, to head back home. 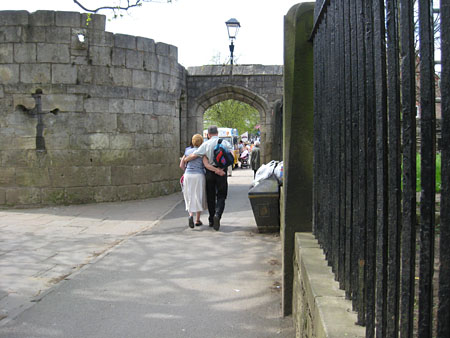 Down on the riverside path it was quieter, more relaxed, as it always is. This couple walking ahead of me cheered me up, arms around each other, having a leisurely stroll, while I was racing along desperate to get home and escape out to the countryside somewhere. 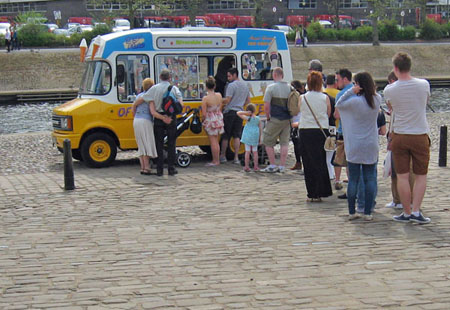 At the bottom of Marygate, on Marygate Landing, everyone was making a beeline for the ice cream van. Compare with a photo I took of the same van some summers back from the opposite river bank. That photo seemed to sum up the infamous wet summer of 2007. I hope this one sums up the coming summer of 2013.

I’m sorry this page isn’t particularly aesthetically pleasing. The next couple of pages will be, I promise.