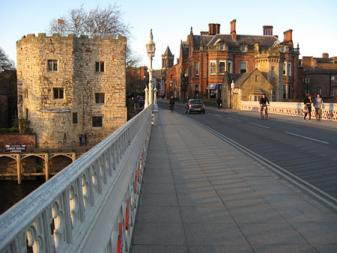 Here’s Lendal Bridge pictured recently, an evening in late April, with barely any traffic. During the day of course it’s generally full of traffic. I can’t say this has in any way offended me, and I’ve generally found it possible to cross the road when I need to. Sometimes after waiting a while.

Cars and where they’re allowed to go is of course a recurring talking point in this fair city, and is being hotly debated again, as City of York Council are to run a trial affecting access to the bridge.

This isn’t pedestrianisation: according to the Press article buses, cyclists, taxis and emergency vehicles would not be affected and would use the bridge as normal. Sounds like it might still be fairly busy then. It will be interesting to see if pedestrians stay on the pavements or if they wander about in the road holding up the buses and taxis.

Personally I don’t have a strong opinion on this either way, but I know that many people do. I don’t drive, can’t drive, have never needed to. But my partner drives to work every day and I’m aware of some of the frustrations and problems in certain parts of York.

My main walking route into York is up Bootham, and my nearest bridge is Clifton Bridge. It seems likely that these plans will divert more cars over Clifton Bridge and along Bootham, so no doubt they’ll affect me in that way, as a pedestrian walking next to even longer traffic queues.

In a more general sense, I wonder how far it can go, this ‘cars bad, walking/cycling good’ approach. It must get to a point where the balance swings too far and residents give up on the city centre altogether, and local businesses find it too difficult.

The area within the walls is increasingly special and posh. It fills itself with coffee shops, restaurants, gift shops, craft shops, art galleries – all lovely things – but if you actually live here and need everyday things you don’t come into the city centre for them? And if you’re a business in York, or delivering stock to shops in York, or delivering goods from them … well, I don’t know, you tell me perhaps.

In our household we don’t need to drive into the city centre, because we can walk there. Older relatives who live in the suburbs can’t walk that distance, so they use buses, but still go into the city centre to shop at the market, at Barnitts, Tullivers – long-established local businesses they’re loyal to. I walk into town and shop at the same places. But if I was further out of town, would I bother? If I had a car and could get everything I needed at Monks Cross or Clifton Moor, would I bother? Already we head out to those places for many things we need, either because the city centre doesn’t sell them or because they’re too heavy to carry home.

The proposed restrictions on the use of Lendal Bridge are just part of a general trend towards being more pedestrian-focused. I should as a committed pedestrian be glad about this, but I’m not. I’d like the city centre to retain shops selling useful things, and to be somewhere residents can go to buy useful things, and can’t see how that can work when ordinary vehicles face more and more restrictions.

I guess York city centre will end up being a place for eating and drinking and art and culture. And the remaining shops will sell desirable beautiful things, but not anything people actually need. And the residents, when they need something, will drive out to Clifton Moor/Monks Cross. But presumably that will be seen as succesful, as traffic diverted from the city centre is what City of York Council want?