We build, demolish, remodel, bury, excavate, open up, close down. There are so many layers to this place, in its centuries of change.

I live in an era where ‘opening up’ seems to be the thing, where ‘open access’ is a phrase used more and more often in so many areas of our lives. It’s based on noble principles, that we – all of us – should have equal access to resources, places.

Here’s one place opened out, to which most of us had access, at least during daylight hours when the gates next to the library were open. As recorded in comments by Mallory on an earlier page, fit young people who could climb over gates could access this area at other times too. 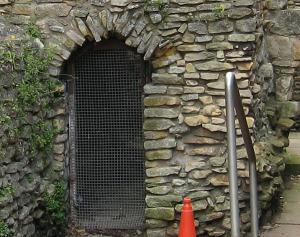 Once it’s opened up, it’s open to abuse, misuse, littering, graffiti. So here we have the sad sight of the place my friends called ‘the summerhouse’, now all sealed up with wire mesh. The path alongside the walls designed to lead to it now goes nowhere, just to a dead end.

I’m realising that there’s as much closing down as there is opening up. I still miss the closed path through St Peter’s school, and just tonight found that All Saints Lane has been gated. Perhaps if somewhere is special and charming its special qualities have to be preserved for the benefit of the privileged few. Those who understand, appreciate, preserve a place, and have the funds and ability to do so.

As mentioned in a previous page, it has been suggested that the redevelopment of the council building on St Leonard’s Place could include a new access point to this sad-looking dead-end, and its Anglian Tower, on the edge of the Museum Gardens.

Opening up this area behind the library might enhance the place or it might ruin it. Though the wire mesh sealing up the tower has already ruined it, dead-ended it, really, hasn’t it?

By Lisa @YorkStories • 22 July 2012 Opinions, thoughts
Tagged  'Anglian Tower'
To link to this page's proper location please use the > permalink