Approaches to the Anglian Tower – 2

There were bronze plaques on the walls here once. Two of them. One to explain the historical significance of this ruined building, and one to mark the life of an archaeologist who died here, on 22 July 1970. 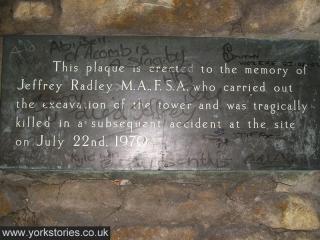 I was too young, in 1970, to recognise this tragedy. So were the teenagers who later scrawled all over the commemorative plaque. Pictured here in 2004, before it disappeared.

This photo is one of those images from my local wanders which has no artistic merit but which could prompt a whole page of analysis, or at the very least, questions. Like why a group of people – girls, apparently – would write on a commemorative plaque. Whether all surfaces are equal if you want to label another girl as a ’slag’. Whether the lack of respect is due to not having lived long enough to know what death means. And what the relatives and friends of Jeffrey Radley would feel, seeing this. That last question makes me feel a bit uncomfortable about including this photo, as it did at the time I took it.

Closer inspection shows that amongst the scrawl there has been added ’sorry u died Jeffrey’. So a moment of recognition then, and a message written in a rather endearing way, directly to Jeffrey – after they’d written their teenage scribblings all over his plaque.

They’ll be grown up now, and may now know what death means, and may perhaps have been to lay flowers in a specific and important place, precious to them, which they’d want other people to respect.

I’ve taken thousands of photos of York since this one, but this is the most thought-provoking, still.

Here in the layers of earth and stone Jeffrey Radley died when the structures supporting the excavation gave way. On 22 July 1970, 42 years ago today, the local press reported the cave-in and that he was feared buried.

The Yorkshire Evening Press, in April of that year, had reported that a scheme for the opening out and permanent exhibition of the Anglian Tower had been approved.

The plaque commemorating Jeffrey Radley’s work here was unveiled in 1971. It seems to have disappeared sometime in the last couple of years. As have several other valuable bronze plaques placed by York Civic Trust in other city centre locations.

Jeffrey Radley also wrote poetry, my online research revealed. I hoped that the library building overlooking the place where he died would have copies of his poetry, but it doesn’t seem to, so sadly I can’t end this page with any of his work. Perhaps someone out there can assist.

I climbed up the banks nearby recently, and looked down on this area, and saw the excavated layers from a new angle, and lined them up, framed in photographs. It was only later, looking at them again on another screen, back at home, that I remembered that I’d meant to mention the Anglian Tower again – its sealed-up state, and that bronze plaque.

So thought I’d do that today, 42 years to the day since Jeffrey Radley died here, in recognition of his work in opening it up.

I can’t offer a bronze plaque, just a website page.

I am fully aware that I’m writing this as someone who didn’t know Mr Radley, and that I’m only an observer, decades on, of our city’s more recent layers. Comments are welcome below, and on the associated pages on the Anglian Tower.

By Lisa @YorkStories • 22 July 2012 Histories
Tagged  'Anglian Tower', plaques
To link to this page's proper location please use the > permalink