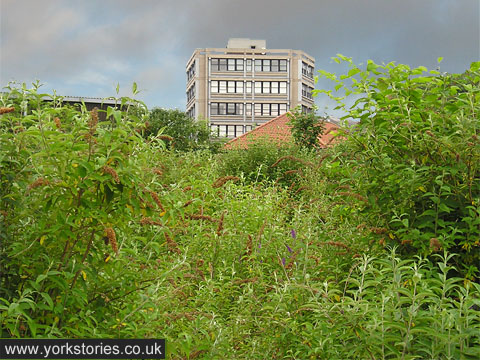 The Hungate development site, with Stonebow House rising up like some kind of brutalist concrete ship from a sea of greenery. This kind of site may be weedy, mainly made up of the ubiquitous buddleia, but it has its own apparently limitless vigour. It needs no maintenance, no artificial feeding or watering, and is valuable to smaller creatures even if we don’t value it much.

Brownfield, in its widest and generally accepted definition, just means previously developed land. It isn’t an attractive word, and suggests desolate industrial sites, all dead and polluted, where nothing grows. As discussion continues over the Local Plan, I keep hearing people on radio phone-ins saying that we should be building only on the brownfield sites — usually because they live near the green belt and don’t want housing building near them. 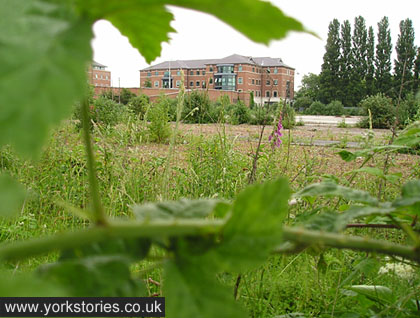 We are of course building on the brownfield. Maybe not as quickly as some would like, but this bit has been built on since this photo was taken, in June 2006. Part of the Hungate site, since covered with apartments. 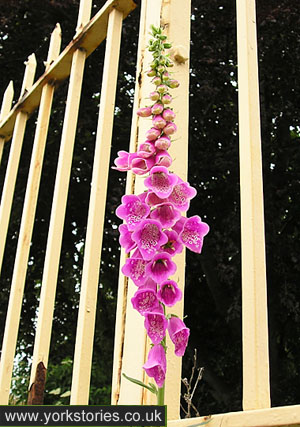 Foxgloves were blooming here, that summer, and as noted at the time this one in particular was so handsome that I thought it was worth a hundred hanging baskets. Bees love these flowers, and the sound of a bumble bee happily stuffing its furry body into the trumpet of a foxglove flower is one of the cheeriest sounds you can hear on a summer evening. 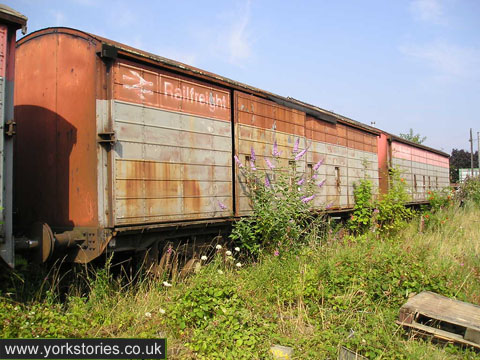 The railway yards on Leeman Road, in summer 2004. A vast area of land where it seemed no one had been for decades. Most memorable were the goldfinches suddenly rising chirruping from the weedy greenness, feeding on August’s bountiful seeding. And the old rolling stock amongst nature’s reclaiming of the place. Rowan trees, full of berries, to feed other creatures later when the colder days came. 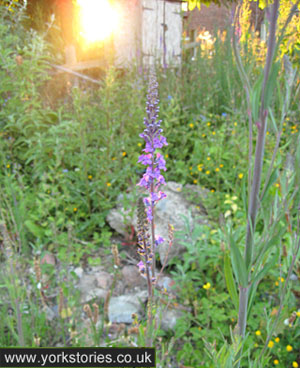 More recently, a June evening this year, surprising flowerings on Penley’s Grove Street. The light was too low for me to properly capture the variety of blooms springing up from this weedy patch, white, blue, purple, red, and the foxgloves again. Next to the site where Groves WMC used to be — now townhouses and apartments, all neat and new — this riotous tangle.
Some of the flowers looked to be familiar garden plants rather than the usual weeds. 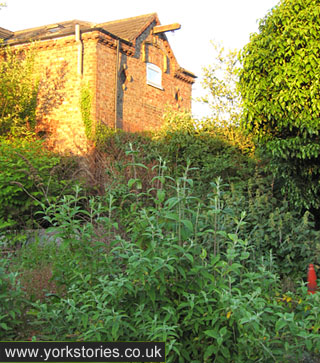 Towards the back of this yet-to-be-developed brownfield site are boarded up buildings — old coach houses belonging to Settrington House, which originally occupied this site. These buildings and the ornate gate posts at the entrance are all that remains. 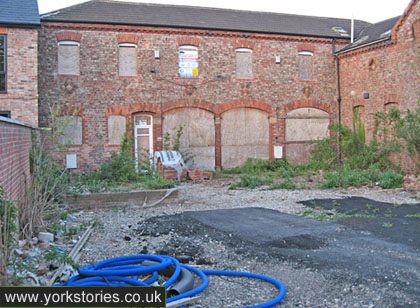 These two photos taken from more or less the same spot show how quickly and vigorously the brownfield grows its greenery. This was taken on 12 April 2011. 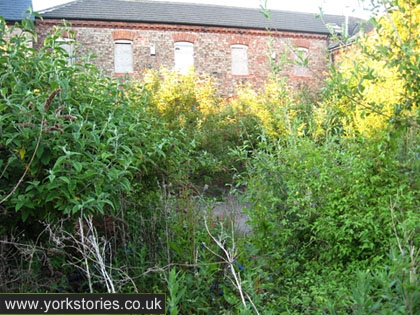 A late 19th century town plan shows that Settrington House itself didn’t take up much room on its plot of land. It was towards the back, with its coach houses alongside, and in front of it a curving driveway. The plan shows planted areas alongside the sweep of drive. Near the gate the curve of the current weedy flowery patch seems to imitate those long-lost 19th century flowerbeds. Accidentally of course. I think the builders dumped some earth here by the gate, and within it were seeds waiting their chance.

Or perhaps a guerilla gardener threw seeds here a summer ago. Who knows. But Settrington House has its garden again, briefly, weedily, splendidly.

It reminds me of a comment by Ralph Harrington, on Twitter, when Tower Street was flooded: ‘This area was once the moat for Clifford’s Tower: it wants to be again.’ These urban places greening over want to be gardens again. Or perhaps the fields and woodlands they were long ago.

Brownfield sites are havens for wildlife. A London perspective, from Fred Pearce writing in the Telegraph in 2007: ‘… in our increasingly landscaped and sanitised world, some of our most astounding wildlife habitats are on derelict urban land’