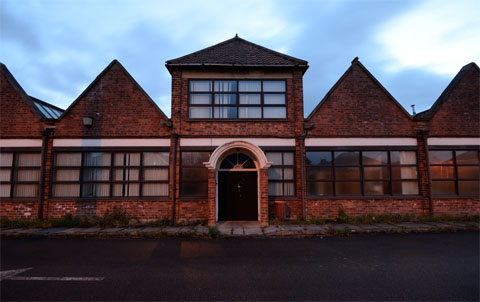 The former Sessions of York print works on Huntington Road. (Photo: Robotronik, via 28DL and on Flickr.)

In the centre of more modern buildings is this rather more handsome red brick building, presumably the original part of the factory, which opened here on Huntington Road in the 1920s.

A planning application has been submitted to demolish the factory and build housing on the site. Inevitable, no doubt, but this place, so much a part of York for so many decades, deserves recording before it’s gone. Several photographers have, and I’m using some of their recent images (with permission). 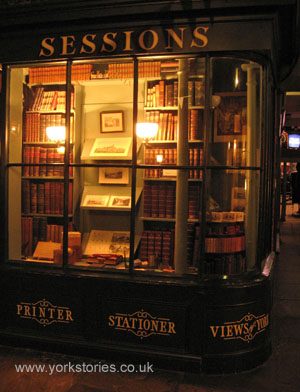 Sessions had a long history in York. The business was founded by Quaker William Alexander in 1811, as a bookshop and stationer’s, continuing under the Sessions name from 1865. As is the case with other lost York businesses, it is remembered in the form of a replica shopfront in the Castle Museum, with painted lettering advertising ‘Printer’, ‘Stationer’, ‘Views of York’. 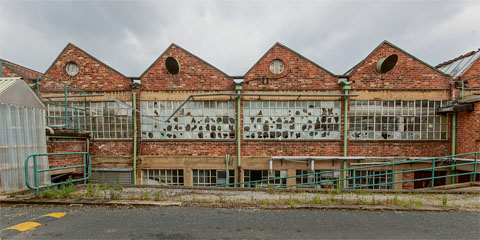 (Photo: Kopex)
The company later focussed on printing, and had a print works in North Street before moving here to Huntington Road.

Rather sad to see the factory in this state now, windows smashed.

We may have kept the Terry’s factory buildings and part of the old Rowntree factory, but there’s no chance of these being preserved and obviously no chance of their being reused for an industrial purpose. The most pressing need is for new housing. 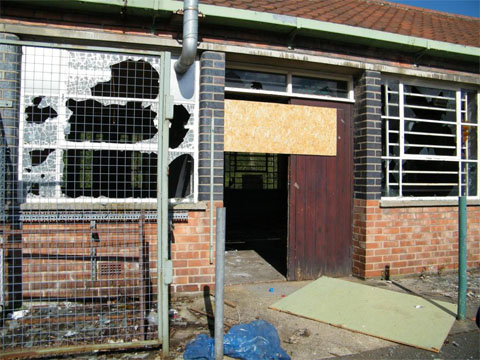 (Photo: urbanadvantage)
Some locals are clearly so eager and impatient for this new housing that they’ve already started on the demolition of the factory. 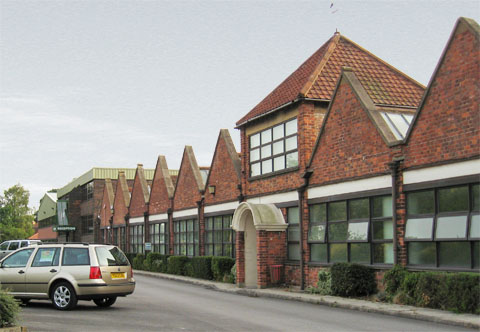 2010, a photo I took when passing one evening, after Sessions had gone into administration. The business had been put up for sale the previous year. Its label printing division was bought and continued operating at this site until late 2011. 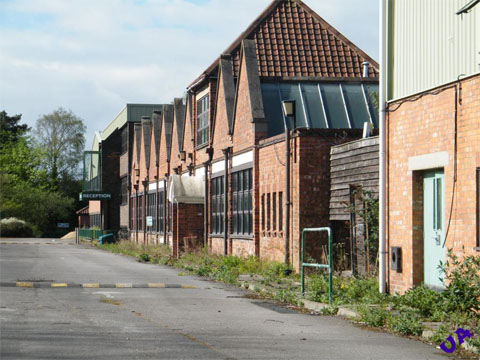 (Photo: urbanadvantage)
It’s not that long then, since closure, but the front of the premises already looks as if the place has been abandoned for decades. The tidy trimmed hedges have gone and weeds grow in the cracks in the paving. 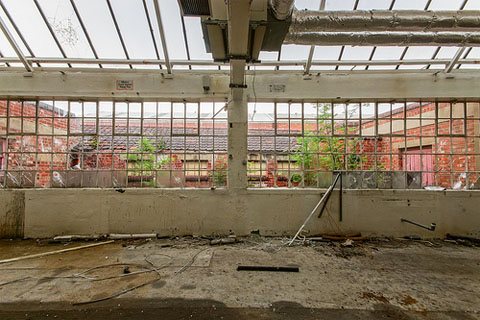 From inside the factory, a view of weeds and shrubs waving their leaves outside the broken windows.
(Photo: Kopex)

Nature’s reclaiming of the place would have been no surprise to Bill Sessions, who was a great supporter of the natural environment and wildlife conservation and had established a nature reserve alongside the factory, near the Foss. 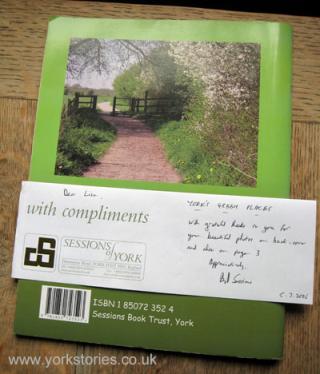 It doesn’t seem to be mentioned much in accounts of this factory’s closure, but alongside the commercial printing Sessions had for decades published books on Quaker history and also many books on York and Yorkshire, which must also have been printed here. One particularly fine example from recent years is ‘York’s Green Places’.

Every home in York should have a copy. It’s a carefully compiled and extremely useful guide to some places we may be familiar with, others we may have overlooked.

It also has a photo of mine on the back cover, and other photos of mine inside. Which is why I have this treasured copy with a compliments slip, with a note from Bill Sessions.

Among the planning application documents is a comment from York Natural Environment Panel:

‘The former owner, Bill Sessions, was an outstanding supporter of wildlife conservation in York and the Panel would hope that biodiversity enhancement ideas can be incorporated within the site. To such affect the Panel would like to see the best use is made of the land strip sloping down to the River Foss along the western boundary.
… The strip should be managed for the benefit of wildlife by way of a 106 agreement, and could also be open to the public.’

That would seem an appropriate tribute wouldn’t it.

And maybe the window-smashing vandals can be encouraged to plant trees instead.

Well, we can dream.

End of an era for Sessions of York, York Press, 2011. The new owners moved to Lincolnshire, apparently unable to find suitable premises in York. Sessions’ machinery division was bought by Adrian Barraclough and trades as Sessions Label Machines. The commercial printing division was merged with Barringtons of York. So Sessions lives on, kind of, just not in the Sessions family and not here on Huntington Road.

By Lisa @YorkStories • 24 June 2013 Buildings, Industry
Tagged  factories, Sessions
To link to this page's proper location please use the > permalink